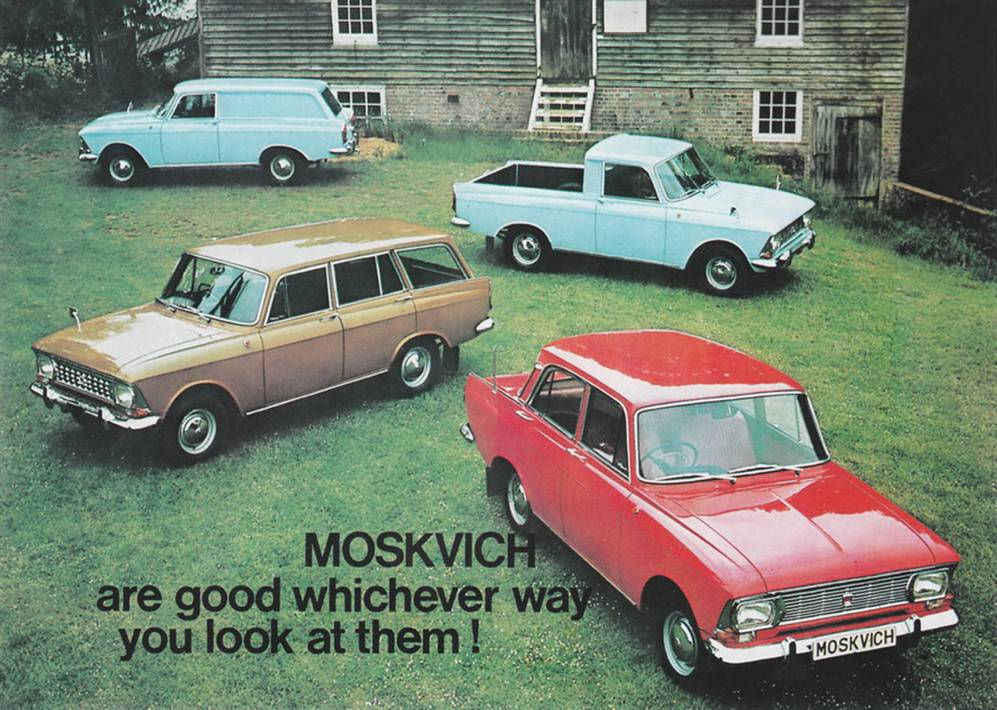 Before names such as Lada, FSO and Polski Fiat had entered the vocabulary of the average British motorist, one of the best-known marques from the former Eastern Bloc was Moskvitch. Well into the 1970s, the saloon and the estate with their faintly retro-1950s[CN1]  enjoyed quite a following with drivers who needed a medium-sized car on a Mini sized budget, while the vans and pick-ups were positively luxurious compared with your average Bedford HA. 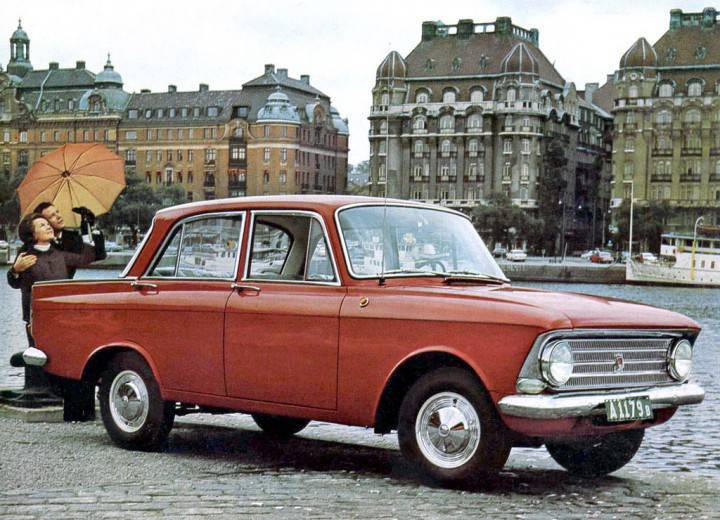 The first Moskvitch to be sold in the UK was the 408, which appeared at the 1964 Earls Court Motor Show. The 1.4-litre engine was based on the 1938 Opel Kadett – at the end of the Second World War the tooling from the Russheim plant had been shipped to the former Soviet Union -and the styling was vaguely reminiscent of the 1956 Hillman Minx. In 1966 Motor grumbled that ‘the lack of attention to such matters as vibration and gearbox noise, heavy brakes and the poor acceleration have removed much of the cream from the borscht’. However, they also noted ‘there really is no Western equivalent which provides so many of the “extra” features in such an unsophisticated, low-cost basic vehicle’. 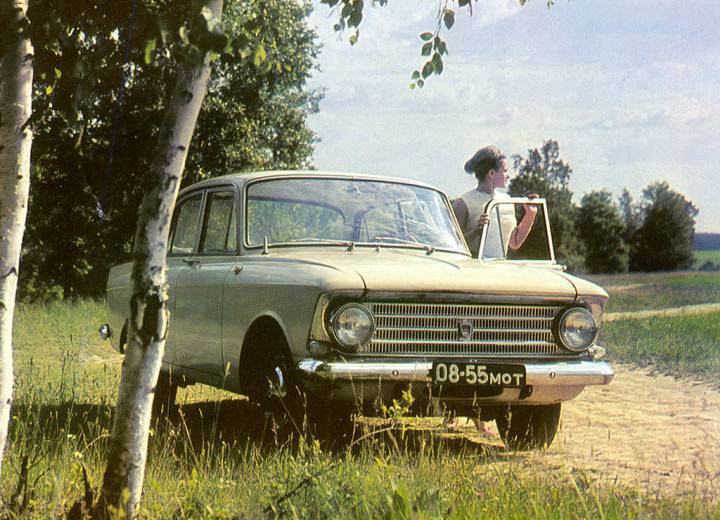 However, it was its eventual successor, the 412 of 1967 that was to become quite a familiar sight in the UK.  The styling looked very similar but under the bonnet was a borrowed 1.5-litre engine. British sales commenced in 1969 and four years later around 14,500 examples had found a home. For a very low outlay the 412 offered reclining seats, two-speed wipers, reversing lamps and a cigar lighter plus seating for five. The 427 Estate was capacious, the commercial versions were practical and the 412 De Luxe saloon even came with a radio and halogen auxiliary lamps as standard. 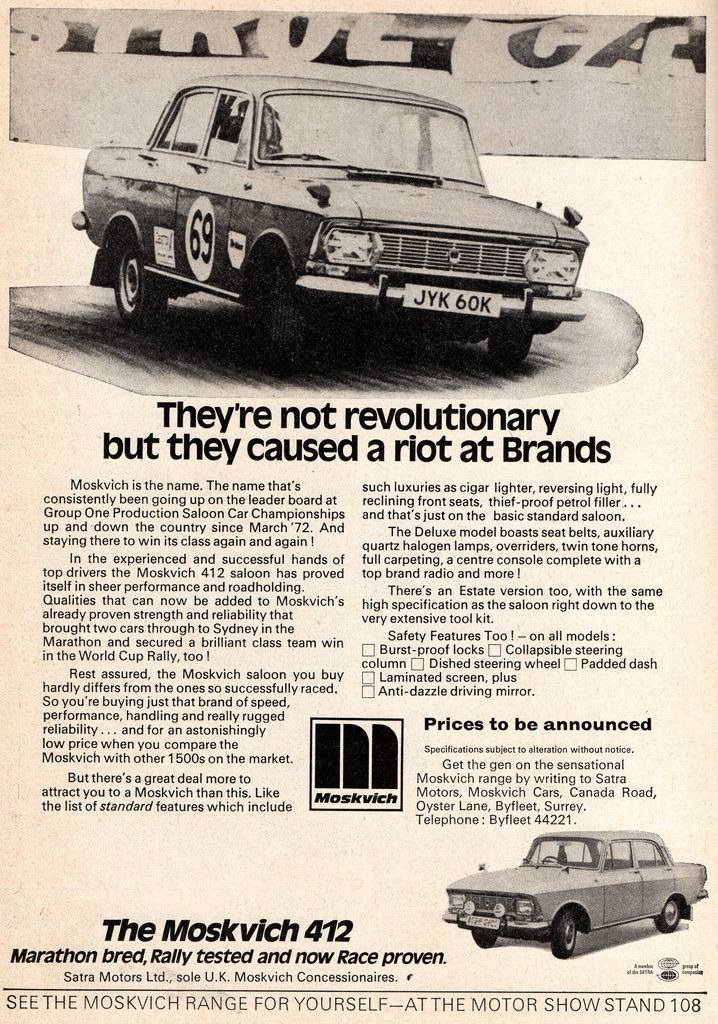 And it was in 1972 that a somewhat incredulous Motor Sport correspondent announced that ‘if I had suggested a year ago that a Russian car was going to win two British racing championships I would have been considered, at the very least, something of an optimist’. By that time the Moskvitch had already competed strongly in the London to Sydney and the London to Mexico World Cup rallies, while a young driver named Tony Lanfranchi had noted that under Group One Production Saloon Car Championship regulations of the day the classes were based on the pre-tax cost of the entrant, rather than its engine size. As the 1.5-litre Moskvitch was famously priced to compete against much smaller Minis, Imps and Renault in the UK it seemed to be the ideal car for its class. The advertisements now read ‘Marathon tested, rally tested and now Race proven’. 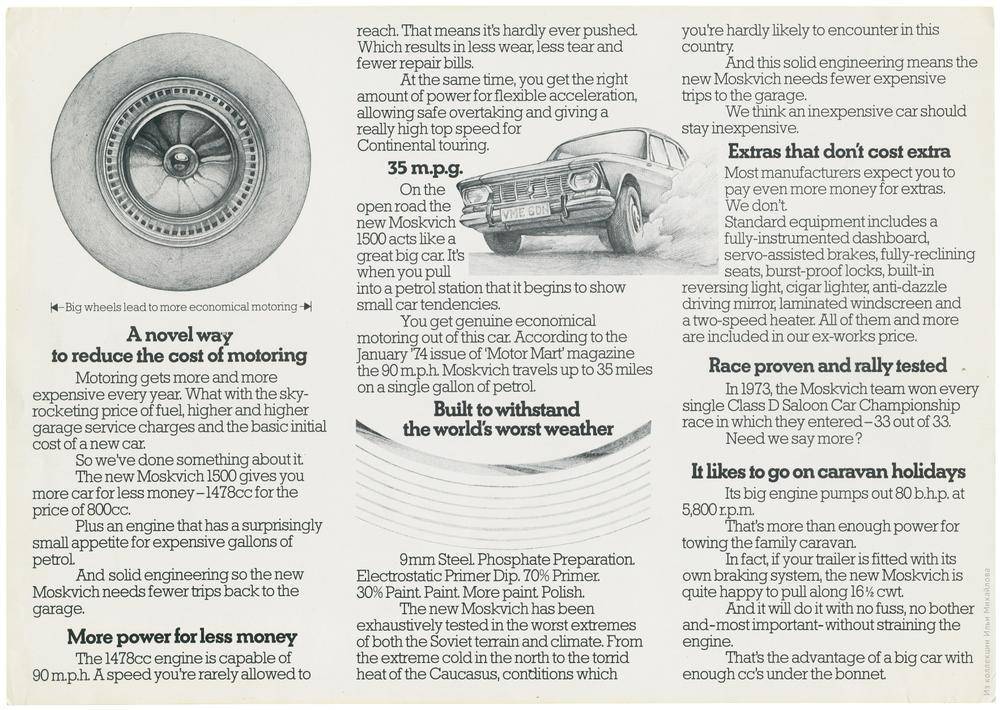 In the following year Moskvitch won all 33 of the Class D Saloon Car races that it was entered for but unfortunately, by that time, the 412 was starting to attract unfavourable attention from the British motoring press, especially from the Consumer Association and Motor – ‘the design and decor smacks of the shoddy mid fifties’ being just one comment from the latter. Moskvitch imports ceased in 1975, by which time Satra had already started to distribute Ladas. 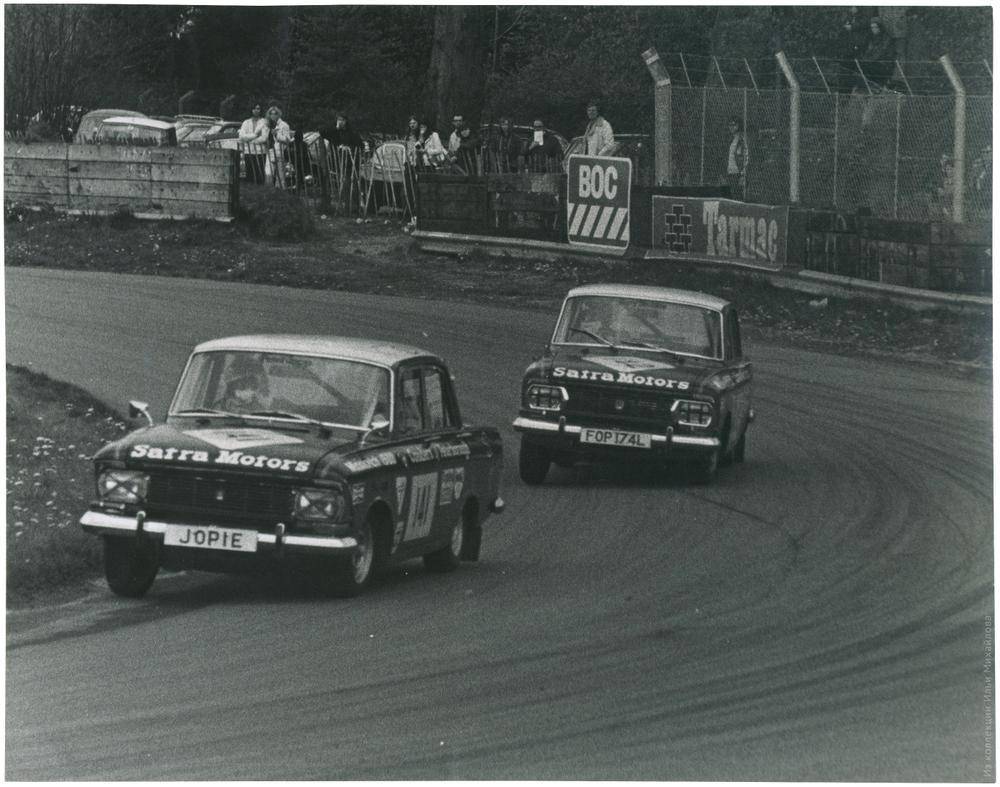 A few years ago, I had the great pleasure of riding in a friend’s 427 and I can honestly say that I have never experienced another car like it.  This advertisement from 1972 brilliantly illustrates the many and various charms of the Moskvitch range although I am quite convinced that is a young Vladimir Putin staring under the bonnet. 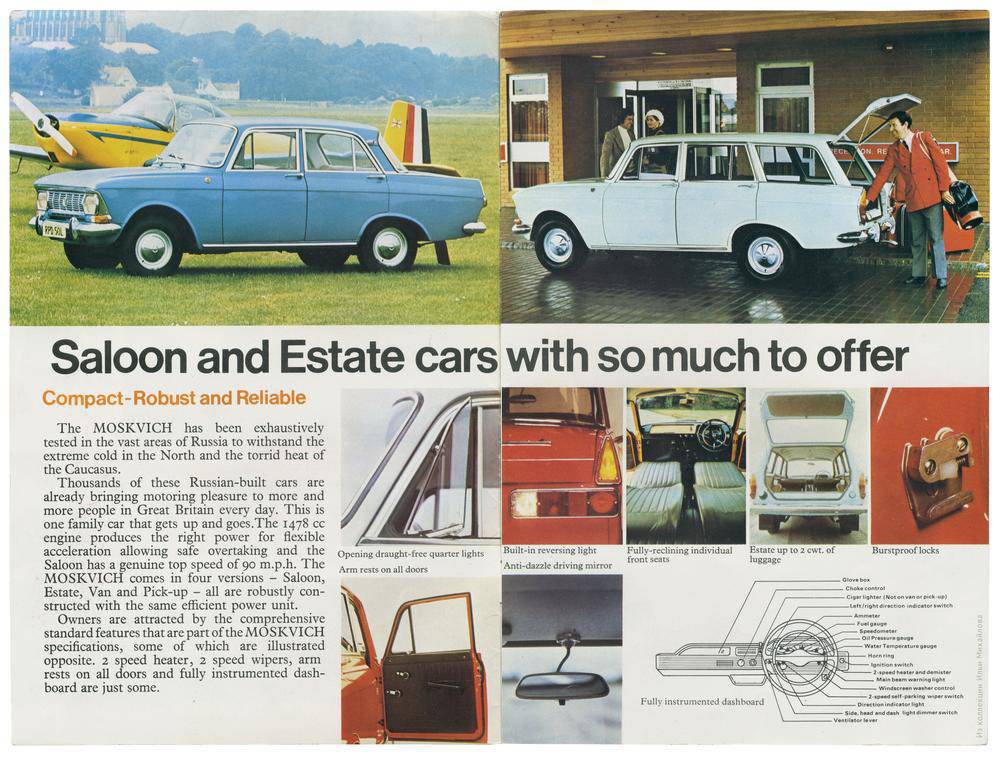