DO YOU REMEMBER – THE AUSTIN FX3?

Of all the lost sights of post-war Britain – traffic lights on striped poles, teddy boys, 78 rpm Alma Cogan records, ten shilling notes, jumpers for goal posts, - one of the most evocative is possibly the Austin FX3 taxi. If you watch any British film (especially Carry On Cabby) or newsreel footage of London during the 1950s and 1960s, you cannot fail to notice their sheer numbers and for two decades they were the definitive black cab, even when they were supplanted by the FX4. 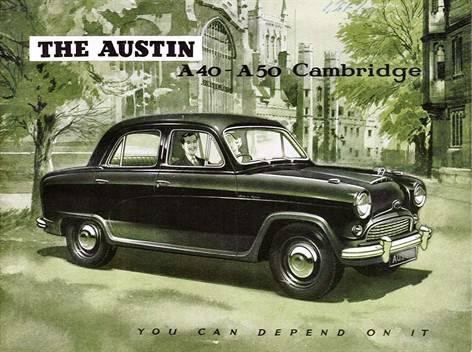 The FX3 was jointly financed by Austin, by Mann and Overton and Carbodies of Coventry and made its bow in 1948 and, as with all previous London taxis, had three doors with a luggage platform alongside the driver. The coachwork was designed at Longbridge but built by Carbodies with a chassis provided by Austin. Within two years of its debut, the FX3 was the most popular black cab in the UK and its popularity was increased by the 1952 option of a Standard diesel engine to augment the 2,199cc petrol motor that was also found in the A70 Hampshire and Hereford saloons. Austin eventually developed its own diesel plant and although an oil burning FX3 was more expensive - £1,012 as opposed to £910 – they were far more suited to high-mileage usage.

Naturally, the FX3 had to comply with the Public Carriage Office’s ‘Conditions of Fitness’, which included a maximum turning circle of 25 feet. The standard equipment list included an opening front windshield – ideal for demisting and coping with London’s pea-souper fogs – larger trim, a tinted rear screen and an integral hydraulic jacking system. The Austin is also the taxi that established the tradition that the capital’s taxis should be black; earlier cabs were available in a range of shades but the FX3’s standard colour was noir and many cabbies were loath to pay extra for any other paint finish.

In essence, the Austin FX3 was a pre-war design that derived from the Sixteen. The early models had mechanical rod-operated Girling brakes but from 1951 onwards there was the welcome introduction of hydro-mech braking. The driver’s cabin space was cramped, despite the height adjustable seat and the all-leaf suspension was not exactly sophisticated but the Austin was also utterly dependable. One modern development was the replacement of trafficators by flashing ‘pig’s ear’ indicators in 1956 as departing punters often used the semaphore arms as an unofficial grab handle. For hire car operators, the 1949 FL1 version had four doors, a steering column gear change and a ‘simply and tastefully’ equipped interior with rear tip-up seats that faced forwards.

The FX3 was replaced by FX4 in 1958 and out of the ten-year production run of 12,435 FX3s and FL1, 7,267 were licensed in London, the last example leaving service as recently as 1968. For many, it was still regarded as the definitive black cab, an image reinforced by a certain Ladybird book (Tootles the Taxi anyone?) and, of course, by Carry On Cabby. The last-named is the greatest Carry On in the history of the world (in my totally valid and unbiased judgement at any rate), not least because Sid James and Austin FX3 is as fine a combination of actor and motor-car as Sean Connery in an Aston Martin DB5. Judge for yourselves - https://www.youtube.com/watch?v=Oh_etDcImtg