Imagine the following scene – it is the 8th November 1968, the city is Leeds and you are a 24-year-old tyre fitter walking home at around one o'clock in the morning. Then, a magnificent Jensen Interceptor pulls up alongside you and the electric window is lowered to reveal that its driver is none other than Eric Morecambe – and he urgently needs directions to the nearest hospital. 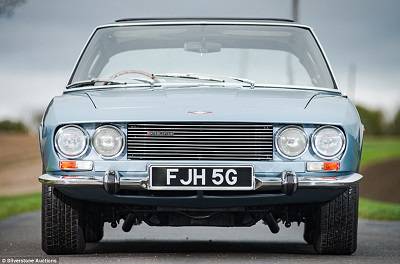 That was the scenario confronted by Walter Butterworth some 49 years ago, a time when people tended to be more in awe of television stars than they are today – especially if they were of the magnitude of Eric Morecambe.

The comedian had been suffering from severe chest pains for some time and when driving back to his hotel from an engagement at the Batley Variety Club they became acute.

Butterworth had only driven a tank in the Territorial Army, but he agreed to take the wheel of the Jensen and drive to the nearest hospital. On arrival at Leeds Infirmary, it transpired that Morecambe was having a severe heart attack and although Walter’s form of leave-taking would become comedy legend – ‘before you go, can you sign this piece of paper? My mates will never believe me about this’ – his actions helped to save the comic’s life.

As for the Jensen, it is to be sold by Silverstone Auctions at the Lancaster Insurance Classic Motor Show on the 11th and 12th November. The Crystal Blue Interceptor, chassis number 115/2977, was acquired by Eric at Charles Follett of Hampstead Ltd on 23rd September 1968, a fitting car for what was proving to be a breakthrough year for the comedian, for Morecambe & Wise were making their first series of colour shows for BBC2. Eric’s son Gary was 12 when his father took delivery of the Jensen – ‘before then my dad used more sedate saloon cars – I remember a Riley and a Wolseley’.

The grand tourer was especially favoured by Morecambe’s chauffeur Mike Fountain – ‘the two of them would go off on fishing trips and so forth and Mike really appreciated that this was a car in which he could touch the accelerator and let fly!’

When reading about Morecambe & Wise, one gains the impression that Ernie was the more avid motoring enthusiast of the duo. Gary remarks that ‘my dad did enjoy driving and liked the idea of cars’ but was less keen ‘on the under-bonnet reality’. Eric continued to use the Jensen after his recovery, but it was eventually sold, and in 1971 he bought a Shell Grey Rolls-Royce Silver Shadow.

This was not just more practical as chauffeured transport but, as his son notes, perhaps the shock of the heart attack had brought the end to the idea of being a dashing young man in a fast car.

Prior to the heart attack Morecambe’s’ work rate was little short of astounding, constantly travelling from venue to venue, but as he stated in a 1969 Daily Mirror interview ‘No more driving a couple of hundred miles to see my family for one day at Christmas because I’m in pantomime somewhere’.

Today any Interceptor Mk.1 is one of the most desirable classic cars in the world, fewer than 30 are believed to survive, especially FJH 5 G, the former property of one of the few entertainers who merits the term ‘iconic’.

You can read more about the Jensen’s quite incredible restoration to concours standards here (www.ericmorecambesjensen.co.uk) and ‘Lot. No, 333’ will undoubtedly be one of the stars of the NEC.

Gary was recently reunited with his father’s car for an ITV documentary – ‘as children, my sister and I were rarely allowed in the Interceptor, so even at the age of 60 I felt faintly guilty about riding in it!’. He also met with Mr. Butterworth, to whom British comedy owes a vast debt, because if the young rifleman had not driven the Jensen to the infirmary, we would have been deprived of this....

Lancaster Insurance have been arranging classic car insurance for over 30 years, so we really are the experts!

GET A QUOTE TODAY!