THE LIKELY LADS – A TRIBUTE TO RODNEY BEWES

The passing of Rodney Bewes on 21st November inevitably conjured memories of his most famous role, that of the socially aspirational Vauxhall driver Bob Ferris. The original BBC TV series The Likely Lads ran from 1964 - 1966 and by the time of the 1973 sequel Whatever Happened to the Likely Lads?, he delighted in owning a second-hand Viva HB De Luxe – plus a really disastrous sense of fashion https://www.youtube.com/watch?v=WtmwckP58s8. 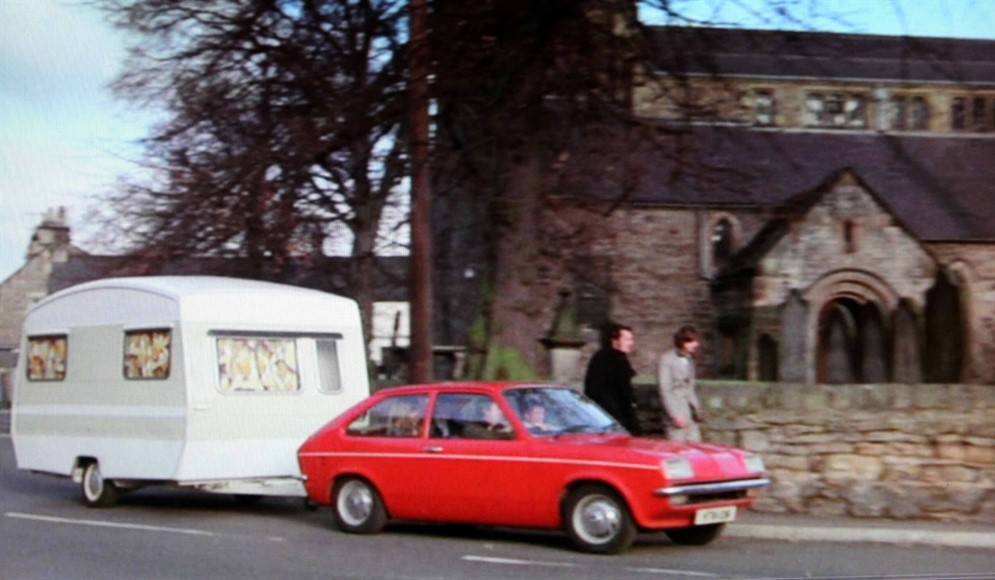 And in the 1976 spin-off film (which reverted to the earlier title) a new Chevette L occupied the driveway of his villa in the Elm Lodge Housing Estate. Between 1969 - 1980, British cinemas were dominated by the big screen versions of popular sit-coms. These vary from the good – Bless This House and Porridge – to the unspeakably bad – I still have nightmares about Nearest & Dearest – but The Likely Lads definitely belongs in the former category. Some of it was shot near Elstree Studios in Boreham Wood – “Elm Lodge” is located at Goldcrest Way in Hertfordshire and the garage scene took place in the old Total station in Hillington. This was one of my favourite moments in the picture, not least because I am old enough to recall Green Shield Stamps and ‘Tropical Tumblers’ for all loyal customers.

However, unlike so many TV sitcom spin-off films that looked as though they were made on a budget of £1.32, one of the charms of The Likely Lads is the extensive location work in the North East https://www.youtube.com/watch?v=kGFr08_iBx4-. James Bolam’s Terry Collier lives at Willington Square in Howdon and the narrative encompasses Tynemouth Pier, the Spanish City funfair at Whitley Bay, Rothbury, Corbridge and Wallsend High Street as they were in the mid-1970s. And this is before we mention the traffic scenes with the Ford Cortina Mk. III, Consul 2-Litre and Hillman Hunter taxis, the Tyne and Wear Fire Brigade AEC Mercury Merryweather Turntable and a Bedford TK pantechnicon.

As for the main vehicles, Terry drives a Bedford CF as part of his job as an “Extralite” soap powder demonstrator and the film is a reminder of how ubiquitous this Ford Transit alternative once was.  But for Bob, further promotion at work has meant that the Viva has been exchanged for a brand new Chevette 1300 L, which would have been the ideal car for the Ferris household – smart but practical. The modest price of £1,718.30 would have almost certainly met the approval of the formidable Thelma and, as befitting the Ferris’ social status, the L specification included a cigarette lighter, a clock and tartan cloth trim. HTM 10 N Chevette was a  PR car and the Vauxhall Chevette and Cavalier Club - http://www.cavalierandchevetteclub.co.uk/chevette%20saloon%20hatch%20estate.htm – points out that Bewes also starred in a 15-minute dealer promotional film for this crucial new model. The film demonstrated that it was adept at towing a Sprite Alpine, even if the (optional) wing mirrors were prone to be stolen by local hooligans and both Chevette and caravan featured in posters as a ‘Great Two-Some!’.

The picture was released in early 1976 and it marked the final outing for the Bob/Terry screen partnership. The Likely Lads regularly surfaces on television and it is unmissable viewing – especially for those of us who remember the Chevette when it was new and how brilliantly Rodney Bewes could express comic melancholy. ‘In the chocolate box of life, the top layer's already gone. And someone's pinched the orange creme from the bottom’.