DO YOU REMEMBER – THE DATSUN 100A CHERRY?

The Datsun 100A Cherry is an exclusive sight these days and a well-preserved survivor that has the power to evoke days of Cola Rola ice lollies and Kenny Everett announcing Celebrity Squares on ATV. It was also the first Nissan with front wheel drive and a car that helped to radically alter British attitudes towards Japanese imports. 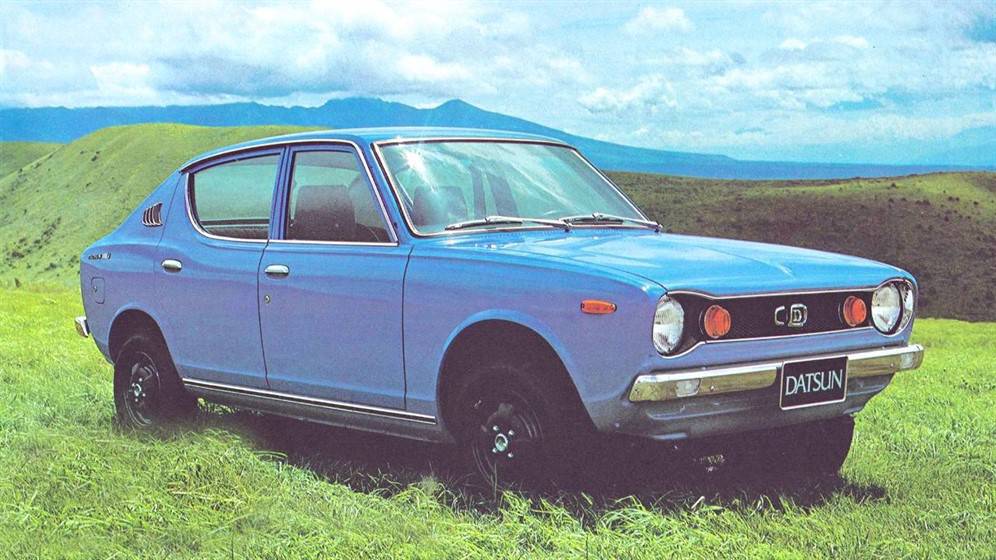 The 100A launched in 1970 in either two or four door saloon forms but in the following Nissan launched a Coupe which remains one of the few cars that can truly be described as ‘individualistic’ as it looked like the result of a marriage between a Lotus Europa and a Mini Van. For anyone who needed more space, and had slightly less exuberant taste in cars, a three-door estate joined the line-up in 1972. Power was from a 998cc transversely mounted four-cylinder engine married to a four-speed all-synchromesh transmission. The saloons and coupe had all-round independent suspension while the Cherry Estate had a ‘dead axle and semi-elliptic springs to cope with heavy loads’.

British sales, under the Datsun badge, started in July 1971 and a month later Autocar concluded that the Cherry was ‘the most formidable Japanese challenge yet’. In 1972 Car magazine tested the 100A opposite an eclectic line-up of a Hillman Avenger 1250 De Luxe, a Simca 1000 and a Renault 6, all of which are now rarer than a Mclaren 720S. The memorable headline for the article read ‘Economical, yes! But would you let your daughter motor in one?’, which could almost be a line of dialogue between Sid James and Sally Geeson in Bless This House.

However, Car went on to praise the Datsun’s road manners – ‘the best handling of the bunch’ and ‘light steering – almost like the legendary Mark One Sprite which was feather light’.  It concluded that the Datsun did everything ‘con brio, albeit with a touch of noisiness to let you know that it’s working hard’. The Cherry 100A’s showroom appeal was further enhanced by a list of standard equipment that included a reversing light, two-speed wipers, hazard warning lamps, and electric windscreen washers. To put this list of fittings into some form of historical context, in 1972 the Datsun cost £10 less than an entry-level Avenger - which offered one sun visor, no fresh air vents or rear ashtray and, my favourite touch of parsimony, a fixed passenger seat.

As the decade progressed, the 100A was frequently sighted as more and more drivers purchase their first Japanese cars as an alternative to a Mini Clubman or an ADO16; the Cherry was closer in size to the latter. In one of those ironies of automotive history, many of them were sold by former Morris or Austin dealers who had lost their franchise on the orders of British Leyland’s management and had subsequently changed to a Datsun outlet.

By 1973, British sales of Datsuns were running at 60,000 per year and when the 100A ceased production in 1977 Nissan held around 6% of the UK’s car market. The original Cherry was a key model in this success story for while it was not devoid of faults – the back seat was cramped and the rust-proofing was less than splendid – but it was reliable, entertaining to drive and well-appointed. And perhaps most importantly, it was instrumental in drivers evaluating a new car on the strength of their merits, rather than its national origins.