The Earls Court Motor Show 1965 marked the official debut of Toyota in the UK, and in the following year, various print advertisements tempted Ford Cortina, BMC 1100 and Vauxhall Viva owners to the charms of ‘one of the world’s most reliable cars’  - the RT40 series Corona. The price was just £777, including electric windscreen washers, carpets, ‘four sealed-beam headlamps’ and a reversing light. As for the station wagon, who could resist the lure of a pale green example just waiting to transport you to Swanage or Weymouth?

The Corona was also sold via the slogan ‘You Can Trust A Toyota’, and those early PR campaigns both introduced British motorists to the famous marque and set the tone for so many of the company’s products over the next 15 years. The emphasis for many Western markets was so often was on dependability - and a progressively increasing amount of chintz.

The last-mentioned was rarely associated with the Land Cruiser, but it was definitely evident in promotions for Toyota’s car ranges. Even in 1969, an E10 Corolla Coupe was seldom regarded as being at the cutting edge of pop culture, but according to the brochure illustration, it was ideal for the sort of people who might actually say ‘far out’ in a Wimpy Bar. Two years later, the US sales material for the first-generation Celica is a reminder of a) its extremely handsome appearance and b) that 1971 was the tail-end of the psychedelic era. As for the second-generation version, the occupants would apparently radiate their inherent charisma via the sliding roof and dazzle all passers-by.

Another significant sales tool for Toyota was a standard equipment list that was more impressive than those of many European cars in the same price bracket. The 1973 brochure for the E20 Corolla features close-up shots of the heated rear window and lockable fuel cap plus a gentleman pointing an accusatory finger at the tailor who sold him that shirt. The cabin of the A40-series Carina is cloth-upholstered magnificence even if the estate version looks as sensible as Leonard Parkin presenting The News at One. With the Cressida, the car for the middle-manager who might have otherwise opted for a Fiat 132 or a Chrysler 2-Litre, we have a Tales of the Unexpected style mystery. Why has this couple met outside of an apparently deserted stately home? What are they plotting? Will the Toyota play a vital role in the ensuing drama? Alas, we shall never know.

And during the 1970s the ultimate Toyota for many – including myself – was the fourth generation Crown that was made from 1971 to 1974. Just bathe in the sheer grooviness of the brochure photos, both of which feature a “fashionable couple”. The lines of the saloon and the coupe are more than enough to vanquish all memories of bad male hairstyles and worse moustaches. Even more importantly, ownership of a car with electric windows, central locking and a push-button radio (all of which was highly impressive to a 1972-vintage buyer) would instantly elevate you to the jet set. Whether you owned the saloon, estate or the striking-looking coupe, the Toyota flagship would make you the Lord Brett Sinclair of the office car park – and you cannot say that of many other vehicles. 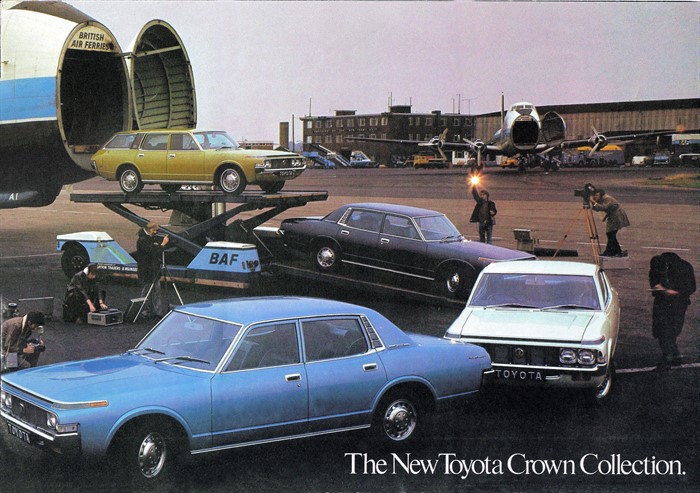