DO YOU REMEMBER – THE MOBIL ECONOMY RUN?

If you happened to glance at the Radio Times or similar publication some 57 years ago, you might well have read the following startling announcement:

The Economy Run was a regular feature of the motoring press during the 1950s, 1960s and 1970s, and its purpose of was to demonstrate how 3 modern cars could best use their fuel. It also promoted the Mobil brand which had only been established in the UK since 1952. The Run, which had been a part of the US motoring calendar from 1938 onwards, was one of their principle marketing tools and the rules were that the entrants were standard production models that followed a set route over several days. The controls were strictly marshalled and  in his memoirs BMC’s Competition Manager  Stuart Turner recalled that ‘ Run by the Hants & Berks Motor Club, this event was taken seriously by the press and was heavily advertised; to protect its integrity it had rigorous scrutineering and you had to carry observers to see you didn't freewheel to improve economy’.

An idea of the scope of the Economy Run may be gauged by Motor Sport’s 1960 report which noted that ‘This year 28 different models of British cars in current production will take part in the 1,200-mile event’.  As for this quite stunning colour footage of the 1956 competition - ithttps://www.youtube.com/watch?v=AOBRF4MWII4 - it is virtually guaranteed to transport you to another age when Sunbeam Rapier Series I drivers would make a gentle hand signal before overtaking a double-decker bus. Our narrator gives warning of the perils of being a ‘tyre scorcher’ ‘gear crasher’ and ’horn blower’, although it would have been fairly difficult to pilot a Standard Vanguard Phase Estate  like a total maniac. Worse of all this fiend is a ‘fuel waster’, as he careers along the A-roads of England in a manner soon to popularised by the classic drama Hell Drivers.

What the picture does convey, in addition to an array of cars that would turn heads today – a Jaguar Mk. VIIM, a Morris Oxford Series III, a Simca Aronde, a Slough-built Citroen 2CV and a Borgward Isabella Combi – is the challenge of the Run itself. The MGAs, the Lotus Climax and the Vauxhall Velox E would encounter day and night runs, some quite vile weather and a gamut of road conditions. The winner of the 1956 Run was an Austin A90 Westminster driven by a Mr. Kendrick and the archives of the Hants & Berks MC contain a huge amount of priceless photos taken over the following 11 years - http://www.hantsandberksmc.org.uk/archive-economy-runs-59-66/4591542579

The last US Economy Run took place in 1968 and by 1975 the British event was sponsored by Total.  The final competition took place in 1987 and today the Mobil Economy Run is still fondly recalled by many drivers who relished the chance to deploy their skills in a standard family car. My own favourite image is of a mighty Wolseley 6/110 ploughing through a 1962 snowstorm in style – and economy.

With Thanks To The Hants & Berks Motor Club - http://www.hantsandberksmc.org.uk/ 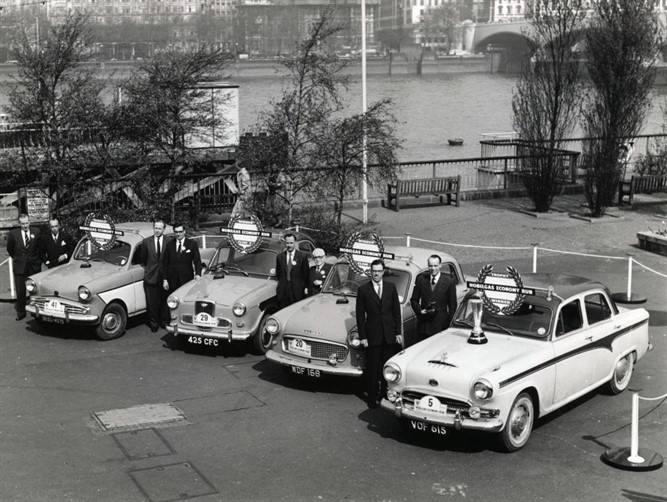