DVD OF THE WEEK – SCOTLAND YARD

One of my all-time favourite film series also features my all-time favourite car marque. In each edition of the Scotland Yard B-features made between 1953 and 1961 there often is at least one highly polished 6/80 and, after 1958, 6/90 arriving at a crime scene located conveniently near to Merton Park Studios. Narrating these tales of murder, larceny and excessive Brylcreem use, was the barrister Edgar Lustgarten and the investigating officer was often Supt. Duggarn, as played by Russell Napier. Critics liked to claim that this duo was often out-acted by various Hillman Minxes and several bus stops but they were essential ingredients of the drama.

After their first cinematic run, Scotland Yard was regularly screened on ITV until as recently as the 1980s, which is when I first encountered them. As soon as I saw the 6/80 speeding through a nocturnal London I was hooked, and this was before I heard the famous announcement:

“Scotland Yard! Nerve centre of London's Metropolitan Police, headquarters of its Department of Criminal Investigation. Scotland Yard! A name that appears on almost every page of the annals of crime detection. Scotland Yard! Where night and day a determined body of men carry on a relentless unceasing crusade against crime!”

The first edition, The Drayton Case, stars a pre-Dad’s Army John Le Mesurier as the Superintendent and other future notables to grace the 39 stories include Ballard “The Major from Fawlty Towers” Berkeley as the Inspector in Bullet from The Past. The Grand Junction Case has Wilfrid Brambell using his real cut-glass voice as a pathologist just months before he was cast as Albert Steptoe and Wings of Death has Harry H Corbett as a Scottish CID officer. This same epic also features an almost unrecognisably young Peter Bowles as a Detective-Constable.

And then there are the vehicles - virtually all of them so splendid that you will forever be operating the freeze frame button. The mean streets of Wimbledon and Croydon are teaming with Morris Series Z GPO vans, Austin FX3 taxis, Standard Vanguard Phase Ones and Thames pantechnicans. Wings of Death also features some “French” scenes, although the Citroen Traction Avant squad car is a) clearly a RHD Slough-built example and b) even more obviously driving on the wrong side of the road in the Home Counties. As for any stunt driving, the famous company 999 Cars would be on hand with their liveried patrol vehicles and expert drivers.

As for my own favourite episode, 1960’s The Dover Road Mystery remains indelibly imprinted on my mind for a number of reasons including a 6/90 flagging down a Triumph Herald, a spiv (wide boys abounded in Scotland Yard) found dead in a Peugeot 203, and another Wolseley trying to chase a tuned up Zephyr Mk. II at an amazing 90 mph. There was also the fact that the Ford changed from a Hi-Line to a Low-Line from shot to shot but this in no way impeding the enjoyment of the drama. Cue Edgar sternly informing us that crime does not pay and the stirring theme music. 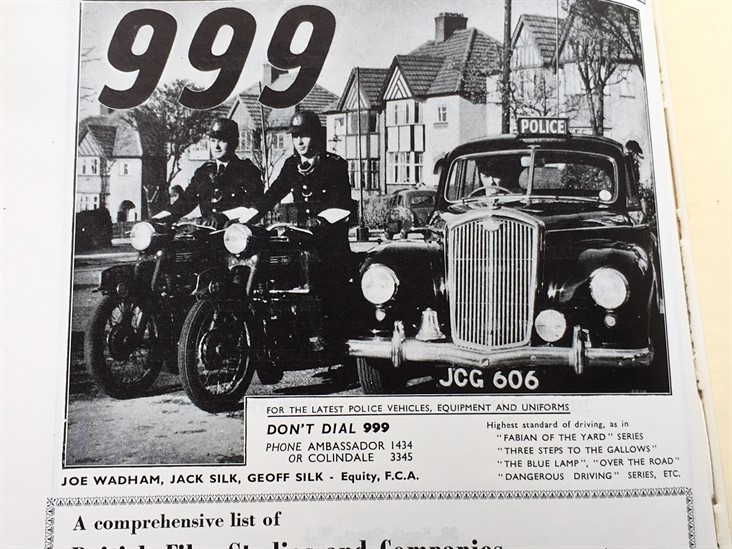