DO YOU REMEMBER THE ‘PRE-FARINA’ AUSTIN CAMBRIDGE? 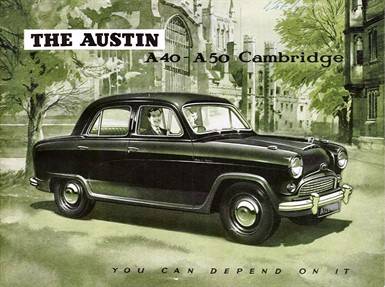 If, like me, you are a devotee of 1950s and 1960s British cinema, there is one model of car that so often appears in the background. A GS5-series Austin A40/A50/A55 Cambridge Mk. I is almost as ubiquitous a sight as a cameo performance from Sam Kydd, reflecting its popularity.  Not to mention the 1957 model that was the property of the unfortunate Frank Carter in a certain Mike Hodges-directed classic gangster drama.

The A40 and A50 replaced the Somerset in late 1954 and its unit-construction coachwork was widely regarded as smart but not so overly trans-Atlantic as to shock the neighbours. Both were powered by the BMC B-series engine in either 1.2 litre or 1.5-litre BMC B-series and the standard choice of the body was a four-door saloon; an A40 two-door was initially listed but this was soon dropped from the line-up. The early versions were fitted with semaphore trafficators and counterbalanced drop windows but these were soon replaced by amber flashers fore and aft and conventional wind-down panes.

The must-have Cambridge for those drivers who liked to think of themselves as belonging to the ‘smart set’ of their borough was the A50 De Luxe; leather upholstery, a heater and even a passenger sun visor all for just £720. If there was an Achilles Heel, it was the steering column gear lever for the four-speed transmission that could prove to be the epitome of awkwardness if swift changes were attempted. 1956 saw the introduction of the two-pedal ‘Manumatic’ option with a micro-switch mounted in the gear knob that would electrically disengage the clutch. Driving with one’s hand casually resting on the lever was not recommended.

By 1957 the A40 was dropped from the range and the A50 was facelifted as the A55, gaining an elongated tail in place of the earlier ‘cow-hip’ arrangement and a larger rear screen. There was also more chrome surrounding the headlamps and, in the following year, the Cambridge could be specified with a floor gear lever. When production ceased in 1959 the GS5 could be fairly classed as ‘an international success for the British Motor Corporation, being made under licence by Nissan in Japan.

However, this was not quite the end of the story. The saloons may have been replaced by the A55 Mk. II ‘Farina’ but the van and pick-ups, which had made their bow in 1957, continued to be listed. By 1962 they had been joined by a badge-engineered Morris version and in late 1963 they gained the 1,622cc engine. Production lasted until as recently as 1973 and almost anyone who grew up during the 1970s will recall these redoubtable light commercials being used by jobbing gardeners, builders and your local greengrocer. For many people they will always be  associated with holidays to Bridport or Swanage in your ‘un-Tor Estate Caravan – the motor home with ‘the advantages of a family saloon with those of a family caravan without sacrificing one to the other’.

Perhaps the main reason why Austin’s medium-sized saloons are so frequently glimpsed in old Rank or ABPC films and in black & white photographs is the same reason why they sold so well – they provided honest, unpretentious transport. And this was despite some very peculiar forms of publicity…https://www.britishpathe.com/video/i-am-a-car-version-1