DVD OF THE WEEK – FROM RUSSIA WITH LOVE

There is a constant debate amongst motoring and film enthusiasts as to what constitutes the finest James Bond film and my own favourites are On Her Majesty’s Secret Service, more of which anon, and From Russia with Love. The latter was based on what is probably Ian Fleming’s best novel and by 1963 Connery was now far more at ease with the role; whisper it, but in Dr. No, he played Bond in the manner of a B-film heavy. There is one of the finest supporting casts of any of the series – Pedro Armendariz, Lotte Lenya, Walter Gotell, Robert Shaw and Vladek Sheybal – footage of Istanbul, Matt Monro crooning the theme tune. It is also the first Bond film to feature Desmond Llewelyn and Ernst Stavro Blofeld plus his white cat  and  the end credit stating that ‘James Bond will return in…’ If all the above were not sufficient reason to buy the DVD there were also some rather splendid motor cars.

From Russia with Love is, in fact, the last Bond film before the multi-gadget Aston Martin DB5 era. Here, Bond is still the Bentley driver of the original books although a 1935 3½ Litre with Drophead Coupé coachwork from Park Ward that is equipped with a radio-telephone would have seemed highly exotic to 1/9d ticket holders at the Croydon Gaumont. 54 years ago, private houses which were ‘on the ‘phone’ were still a comparative rarity.

Although the $2 million budget for 007’s second cinematic adventure was an improvement over that of Dr. No. it was still fairly limited compared to that of a major US production. Much of the picture was shot in and around Pinewood, Argyll doubled for Trieste, and ‘Venice’ is clearly back projection on a par with an average episode of The Saint.  Location work in Istanbul commended in April 1963, allowing the viewer countless opportunities to marvel at the street scenes. Taxis are majestically finned 1959 Plymouth Savoys and 1958 Dodge Coronets darting amongst Ford 17M Taunuses and P2 Series Opel Rekords while the fiendish Red Grant lurks outside the airport car park in a ’52 Chevrolet Styleline De Luxe.

There are also the standard entertaining continuity errors – a 1960 Ford Ranch Wagon magically transforms into a four-door sedan while a 1961 Chevrolet C-30 Apache turns into a 1958 Dodge D-Series. A Silver Wraith also had the interior of a Silver Cloud and if we are being really pedantic, we could also note that Blofeld has the hands of Anthony Dawson but the unmistakable voice of Eric Pohlmann while Nikki van der Zyl dubbed the lines of Eunice Gayson, who played Sylvia Trench. Re-voicing ‘Bond Girls’ was a widespread practice during the 1960s and so Daniela Bianchi spoke with the voice of Barbara Jefford.

But little of this matters in a film of such wit and pace? Almost everyone who has seen From Russia with Love will remember the 1958 Rolls-Royce Silver Wraith belonging to the British Embassy - https://www.youtube.com/watch?v=jFtjm27frWQ- or the Citroen 11 BL “Traction Avant” that is used by a hapless Bulgarian spy in the pay of the Russians and hijacked by Grant. Indeed, Shaw has to be one of the finest villains in any Bond adventure – highly intelligent, ruthless and vengeful. https://www.youtube.com/watch?v=_v_GsNILkoM And, finally, who could resist any Bond film with a scene such as this and in which Bond even orders breakfast with suave aplomb. ‘Green figs. Yoghurt. Coffee. Very black’ anyone? 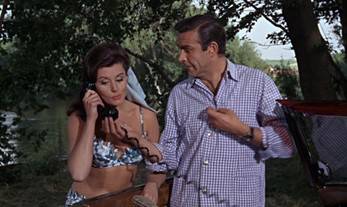