One of the key elements of Magnum P.I., as much as Tom Selleck’s moustache and Robin’s fleet of Ferraris, was the actor John Hillerman, who passed away last year. His Jonathan Quayle Higgins VC was one of the great characters of 1980s television and no episode would be complete without him scowling at our hero driving a Ferrari without due care and attention.

As many fans of the series know, several models of 308 were used during the eight seasons of Magnum P.I.  In  the first season, our hero drives a 1978 GTS which was succeeded in the second, third and early part of the fourth series by a 1980 GTSi and thereafter by a 1984  GTSi Quattrovalvole until 1988. The last-named was sold at Bonhams in January 2017 for a mere US$ 181,500 or £135,621. The cars for the series were provided by Ferrari of North America, with several examples of the 308 employed on screen – some were used for close-ups and others for the action shots. For those dramatic moments when this week’s gang of international fiends shot or attempted to blow up Mr. Masters’ car, there were several GRP replicas that were built on the chassis of a Pontiac Fiero.

The producers had originally approached Porsche as the idea was for Magnum to drive a 928 but this idea never came to fruition. The on-screen cars would have needed an extra-large sunroof to accommodate ariel shots and the company at that time had a policy of not carrying out special modifications and the Ferraris did need some alterations to accommodate 6ft. 4ins. of Tom Selleck. The actor’s stunt double Tom Lupo was considerably shorter than the star but when Selleck was actually driving the roof was seldom in place and the seats had their padding removed so that Magnum would sit lower in the car. Meanwhile, Higgins – as befitting his apparently sedate nature – often drove “Robin 2” which was a success of Audi 5000 C2 and C3s. Naturally, Magnum P.I. also featured an array of excellent support vehicles from a Mercedes-Benz 380SL to an array of menacing-looking 1960s and 1970s Cadillac Fleetwoods.

For me, the show’s finest hour was the two-part sixth-season episode Déjà Vu which was shot in the UK and has the faintly surreal sight of Tom Selleck and John Hillerman amongst Routemaster buses, FX4 taxis, Austin Montegos and Ambassadors and Vauxhall Cavalier Mk. Is. Better still, while Magnum gets to drive a 1937 Bentley 4¼ Litre Gurney Nutting 3-Position-Drophead Coupé Higgins pilots a Reliant Rialto 2 GLS. Almost any actor – with the possible exception of Charles Hawtrey – could look glamorous when behind the wheel of a coachbuilt motor car but only John Hillerman could have made a GRP-bodied three-wheeler look imposing. And throughout the run of the series, few would have realised that the actor hailed from the USA. As Tom Selleck noted:

I would go around London in a cab, and they'd ask, “Where's the Brit, John Hillerman, from on your show?” and I'd tell them he was from Denison, Texas. The Brits are always good at spotting funny British accents in shows, and they all thought John was British.

As all Magnum P.I., enthusiasts will know, it was never fully established whether Higgins really was the multi-millionaire Robin Masters. But he should have been. 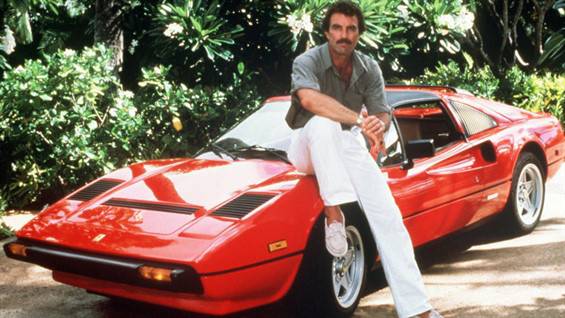