DO YOU REMEMBER – THE HYUNDAI PONY?

If you take a look at an early to mid-1980s photo of almost any high street or shopping precinct car park, you will notice a) the often-dire fashion sense b) some grim cafes that make Little Chef resemble The Ritz and c) the Hyundai Pony. It was the first Korean vehicle to make an impact with British motorists -  although it had some very familiar antecedents.

50 years ago, Hyundai made their first car; a locally assembled Ford Cortina Mk. II.  By the early 1970s, the company was keen to develop its own vehicles. Cortina production continued until the Mk. V was replaced by the Stellar in 1983, but the South Korean firm recruited George Turnbull, the former MD of British Leyland’s Austin Morris division, to devise a smaller in-house model. When he left BL, Turnbull was given a Marina saloon and coupe as parting gifts, and these served to inspire the new Hyundai.

At the launch of the Pony at the 1974 Turin Motor Show, its most notable feature was that it was almost entirely innocuous. The engineering was straightforward, with a 1.2-litre Mitsubishi-sourced engine driving the rear wheels and the Giorgetto Giugiaro styling was pleasantly low-key. The front suspension was similar to that of the Cortina and the floorplan resembled that of the Morris Marina. In 1976, the Pony became the first car in South Korean history to be sold abroad and the Hyundai looked set to provide strong competition to the likes of the Datsun Violet.

The first UK imports arrived in early 1982 and in that same year, the line-up received a facelift. There was now a choice of three or five-door bodies with 1.2 or 1.4-litre power plants and a starting price of £3, 177, which placed the Hyundai as a larger RWD alternative to the Metro or the Fiesta. A 1983 What Car comparisons between the Pony 1400 GLS five-door and the FSO 1300, the Lada Riva, Skoda Estelle 120LE and Yugo 311. The Hyundai was the most expensive of the quintet at £4,497, but the writer thought it ‘the most sophisticated’ car of the group and ‘apart from a mediocre use of interior space there is little to criticise other than a blandness’.

Such minor deficiencies were of little consequence to the great many drivers who rated dependability and predictable road manners above technical innovation and the possibility of being stranded on the A36 in the rain. The Pony never set out to be a charismatic car, for this was a saloon as reliable as a domestic ‘fridge and when a European market FWD model replaced the original RWD version in 1985 they were not uncommon sights on British roads.

Today, the surviving numbers are believed to be in single figures, which only increases their fascination – a family saloon that has the power to evoke the days of The Young Ones and when Top Gear presenters likes to place their foot on a front bumper. In an interview with BBC’s Panorama, Turnbull stated that he aimed for a design ‘which would easily be put into production, would be reliable and durable, and would give considerable; customer appeal and no real annoyance to customers’. And the Pony more than achieved these goals. 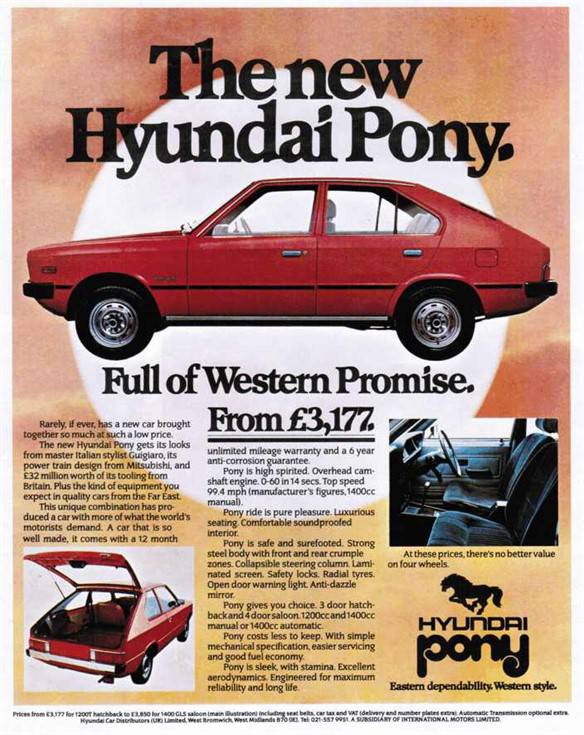