DVD OF THE WEEK – THE IPCRESS FILE

In the mid-1960s British cinema offered you a choice of two spy film heroes, both with a score from John Barry – and both with memorable official transport. Commander Bond favoured an Aston Martin DB5 while Sgt. Harry Palmer of The Ipcress File was issued with a Ford Zodiac Mk. III. The latter also shopped in supermarkets, did his own cooking and was as wary of his MGB Roadster driving superior as much as any rival spy in an R-Type Bentley Continental Coupe with H.J.Mulliner coachwork.

The leading man was one Michael Caine and the picture marked his first starring role in a British film. Prior to 1964 most of his cinematic roles had been small parts –indeed just three years he cameoed as the police constable flagging down Edward Judd’s Morris Minor in The Day The Earth Caught Fire.  Zulu had definitively boosted his profile to the ‘up and coming’ category but when the Ipcress File was in the planning stage the producers initially considered Harry H Corbett, Richard Harris or Christopher Plummer as Palmer. https://www.youtube.com/watch?v=zoCV7vahHjY

Ironically, the film was produced by Harry Saltzman, the co-creator of the Bond pictures, but The Ipcress File was intended to be a deliberate contrast to the 007 adventures. Palmer drives his Zodiac through a grey rainy London of tweed overcoats and trilby hats and summonses the aid of Special Branch in their Austin A99 Westminsters and A55 Cambridge Countryman MK. IIs and Ford Zephyr 6s. The Ipcress File was made at a time when clandestine meetings in underground car parks was not yet a cliché, with two ambulances;  the British in a Ford Thames 400E and “The Other Side” in their Mercedes-Benz 190D.

In fact almost the entire film is a veritable car spotters’ delight from the Humber Hawk of  Thomas Baptiste’s jovially menacing CIA agent to the Jaguar 3.4 Mk. II used by Palmer’s friend and colleague “Jock” Carswell, played by a pre-CI5 Gordon Jackson. As any fan of 1960s spy films will tell you, being the Hero’s Best Friend is often a risky business and Carswell ends up assassinated by the enemy shortly after he borrows Harry’s car. Ford GB, who provided the production with the Zodiac, also arranged for the windscreen to be laminated, so the glass would not shatter when it was hit by a bullet.

Another reason to re-view The Ipcress File is for the London scenes. Jock has his fatal encounter when queuing at the traffic lights at Queen Street and Upper Thames Street, the microfilm is discovered at Stephenson St. in Willesden while rival agents lurk in South Kensington. Meanwhile, the roads are crowded with Hillman Huskys, Austin 1100s, Vauxhall Victor FBs and Triumph Heralds; it is all far removed from ‘shaken but not stirred’.

The Ipcress File was released in March 1965, made Michael Caine into a star and was further proof that Nigel Greene was one of Britain’s greatest character actors (‘listen to me. Only to me…’. It also demonstrated to the world that a tail-finned Ford was just suitable to undercover work as an Aston Martin equipped with lethal accessories. And did we mention John Barry’s theme tune? https://www.youtube.com/watch?v=jn9ZZIpw21E 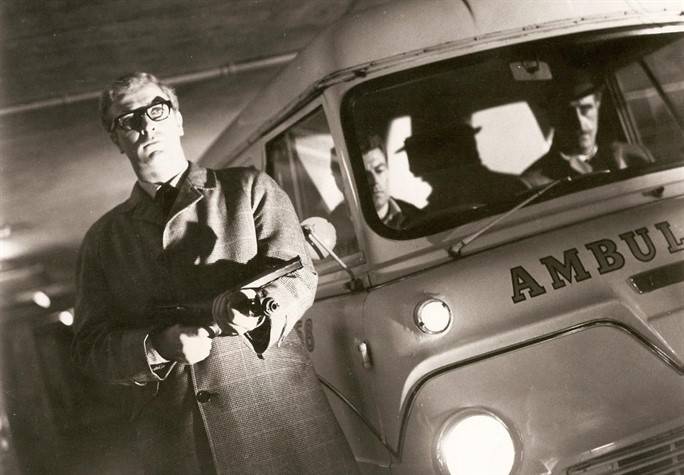