DO YOU REMEMBER – THE WARTBURG KNIGHT?

Great automotive myths of our time No.693 – all cars from the former Soviet Bloc were laughably antiquated. But in 1965, a FWD saloon with all-independent suspension and a high level of equipment, was an attractive proposition – especially as the new Wartburg Knight cost just £630 8s 9d.

Wartburgs were constructed by VEB Automobilwerk Eisenach of East Germany, the first car to wear the badge being the rather attractive looking 311 saloon of 1956. The production run also included a handful of RHD models, with British imports via Industria Industries commencing in 1963. Two years later, the 312 had a new floor pan but much the same styling and by 1966 the transformation into the 353 1000 - aka the Knight in some overseas markets– was complete. Industria had now established a modest network of sales outlets across the UK and for the price of a Mini or Hillman Imp, the budget-minded motorist was offered a four door /five-seater that was much the same size as the Ford Cortina Mk. II.

Power for your Wartburg was from a venerable three-cylinder two-stroke 991cc engine, a plant had been at the heart of DDR popular cars for many years. Turning the ignition key would result in a succession of bangs and whirring sounds that were more associated with a science fiction Z-film -

There was also the issue of exhaust fumes, for many an owner would travel to work in a blue cloud of mystery. One well-remembered feature of the Knight was the freewheel, which provided a degree of protection for the motor from the effects of inadequate lubrication

Yet it should be remembered that many a Wartburg driver would have traded in a 1950s model for their first new car and as such the heavy steering and lack of refinement were very minor sacrifices. The advertisements proclaimed that the Knight had ‘the looks of a far more expensive car’, which is not inaccurate. The aerodynamic coachwork was different to your average family runabout at a time when ‘foreign cars’ were widely regarded as exotic and this is before you considered the specification that was described by Autocar as ‘Value for money’. Reversing lamps, a heater, a cigarette lighter, two-speed wipers, a cigarette lighter and reclining front seats were all standard equipment and British market cars had a floor gear lever.

Official UK sales of the Knight ended in the mid-1970s, by which time they could regularly be seen plodding through the nation’s roads, amiably clanking as they did so. Quite a few small businesses favoured the capacious “Tourist” estate while the saloon was ideal for those who cared less about fashion, and the opinions of others, and more about simple utilitarian transport. The last Wartburg was constructed in April 1991 and not even a new VW 1.3 litre engine was enough to save it – German reunification and changing times had finally rendered the 353 obsolete. But let us recall this genuinely individualistic car in its heyday, thanks to this sales film accompanied by a John Barry-style score. Here the latest Wartburg is depicted as the most swinging car imaginable - and one well-worth the 10-15 year waiting list in its homeland - 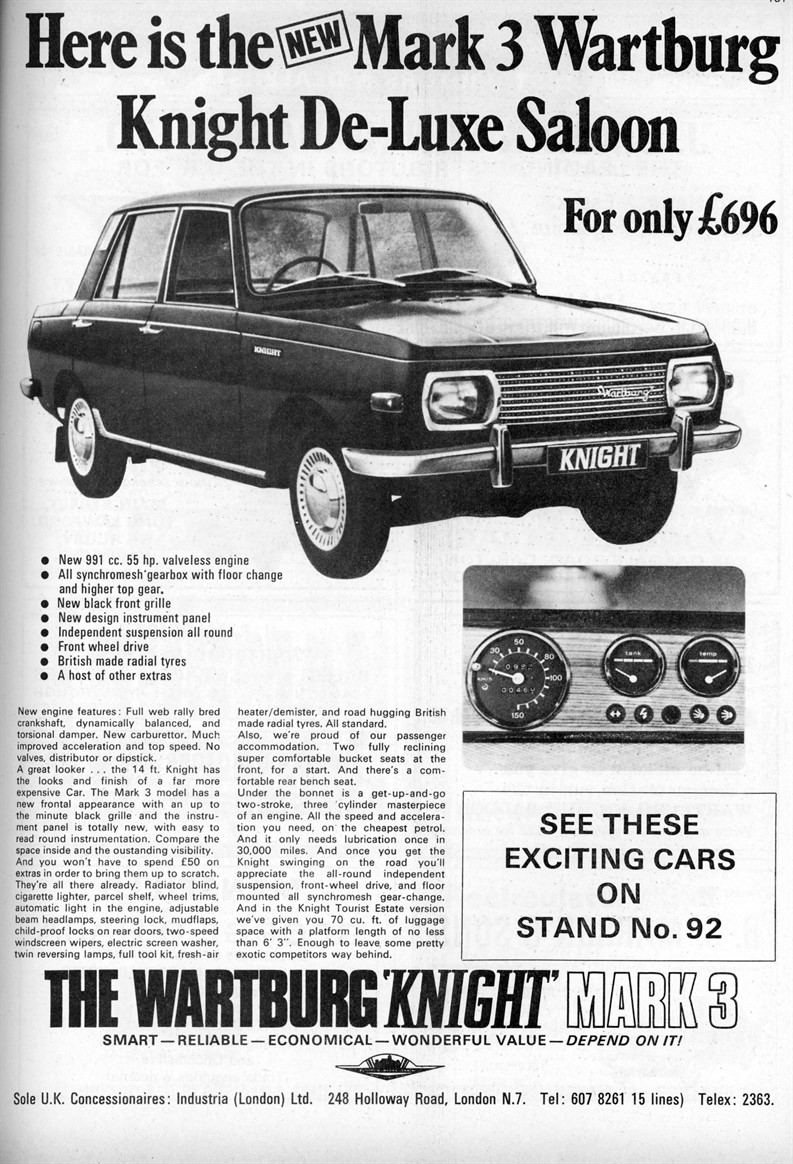