Michael Carpenter is a young man with a mission and his most recent challenge was the restoration of a vehicle now so rare as to make the Jaguar XK120 appear positively common and one that is sure to draws crowds wherever it goes. It is, of course, a 1984 Morris “Ital” 575 Van.

For countless enthusiasts of classic machinery there is an abiding fascination with those once familiar vehicles that seemed to instantly vanish circa 1996 - and this is especially the case with vans. Light commercials tend not to be affected by the vagaries of fashion, so they often retain much the same styling for many years – and their survival rate is often very limited.  As for Michael’s van, ‘I bought her in November and it was in a very rough state. There were holes in the sills and rear quarter and it was very dusty after being in a barn since 1993’.

A41 SHK is the final incarnation of the Marina Van, which were rebadged as the 440 (7 cwt) or the 575 (10 cwt) in 1978 – ‘The 440 was the lightweight which had the Marina car rear axle and mine is the 575 which was the heavy weight which had a MGB rear axle’. In 1982 they gained the Ital nose some two years after the saloons - ‘Crisp new front styling’, proclaimed BL - and your new Morris also offered ‘night time illumination for the heater controls and switchgear’. Two trim levels were on offer and the Carpenter 575 is ‘just a lowly “Standard” - you can tell by the cardboard door cards, vinyl seats and no carpets’. For such luxuries as fabric upholstery, a cigarette lighter and reclining backrests, you would have to invest in an  L spec. van although at least this example has ‘fancy inertia belts’ rather than the base version’s static items. Under the bonnet is the 1,275cc A-Plus engine and in terms of maximum speed Michael reports that ‘I've done 65 and that was enough!’ He also notes that ‘the very last Vans had telescopic struts fitted with torsion bars so they handled very slightly better than the Marina’.

In the early 1980s British Telecom and the Post Office ran fleets of Morris vans while small traders would typically use them as an everyday workhorse. It was not uncommon for a 440 or a 575 to amass a six-figure mileage, before it was either traded in for a Maestro 500/700 or scrapped. The last models were sold in late 1984 and by 2000 their numbers were already decimated by rust and general neglect. Michael’s 575 was ‘a builder’s van for its first nine years and it went into a tender sale after the business closed down’. He first encountered it when he was a teenager; ‘My old boss bought it but never done anything with it. I remember cleaning all the old plumbing tools out the back when I was 14. Unfortunately it needed welding so he put it in a barn and forgot about it until November when the barn was due to be demolished and the van had to be sold’.

And so the restoration process commenced, although Michael rather modestly underplays his achievements – ‘‘they are so simple to repair and still get parts for!’  On Wednesday 31st January the mighty van was MOTed which makes it one of the very few still remaining on the road – ‘I'm not sure how many are left but it is no more than 20’. Mr. Carpenter thinks that one of the best aspects of his Morris 575 is ‘knowing that if I hadn't come along it would have ended up being scrapped. Most importantly of all – ‘it’s good fun!’.

With Thanks To - Michael Carpenter 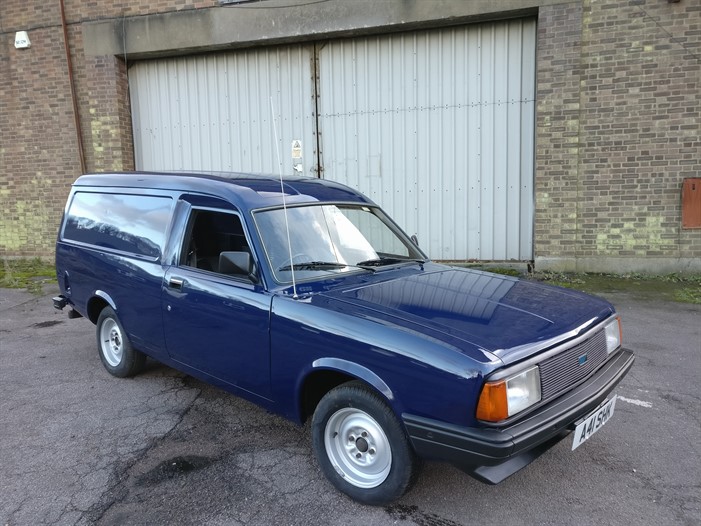