There is one detail about the 1977 Morris Marina 1.3 De Luxe S2 Estate owned by Michael Carpenter that makes the late 1970s appear incredibly remote - the lack of a rear wiper. 40 years ago, that was a luxury on a par with possessing a SodaStream. As one who had previously driven an Ital Van, Michael is used to Spartan driving, which is just as well if you are the custodian of a second-generation Marina De Luxe.

If you wanted the decadence of a dipping rear view mirror, reclining front seats, wheel trims and a cigarette lighter you had to order the Super, while a clock and nylon upholstery were the province of the Special.

Still, the Carpenter Morris does at least feature two-speed wipers and ‘easily cleaned knit-backed vinyl’ trim while the four-door came with ‘a ‘large, padded, rear parcel shelf’; one really has to admire the art of the brochure copywriter. Furthermore, Mr. Carpenter is keen to point out, that at least his Morris has a carpeted floor as the Series 1 featured matting.

To anyone who recalls this era, the De Luxe’s specification was par for the course as almost all entry-level versions of British family cars had a similarly limited array of standard equipment.

Even Car magazine, who was not a particular fan of the Marina, noted in a 1975 test of the 1.3-litre saloon that it offered ‘space’ and ‘general simplicity’ – which is just what many businesses demanded, The Mk.2 featured much-improved suspension and a car such as the Carpenter Marina would have typically served as a fleet vehicle and these were often destined for a harsh life –   especially if they were a station wagon, and especially if it was a small engine model.

Today, Michael now owns one of the rarest cars in the UK, one that can recapture the past far more effectively than a GT or hand-crafted limousine of the same period. A Marina was as taken for granted as virtually any other aspect of everyday life, from the price of a tube of Spangles or a Texan Bar to watching The Kenny Everett Video Show on ITV.

It is also very easy to overlook the fact that four decades ago, having a new car of any type was a major event in family life – arguably more than it is today –, one which would impress any neighbour who still drive a second hand Austin A60 Cambridge.

When Michael encountered his Marina Estate earlier this year, it had been out of sequence since 1981, but now it is ready to once more cruise (albeit gently) the mean streets of Felixstowe.

From the 9th - 11th November it will be starring on the Morris Marina Owners’ Club & Ital Register stand at the NEC - and in the words of its owner ‘I'm honoured that my car has been chosen to be one of three vehicles to represent the Marina Club at this year's show’. As for the De Luxe’s (comparative lack of) interior trim, it served as a spur to the average late 1970s Morris driver - make more sales, gain that promotion and finally be issued with the keys to a company car with s MW/LW radio. Anyone who remembers the late 1970s will almost certainly recall the joys of taking a long holiday trip sans in-car entertainment… 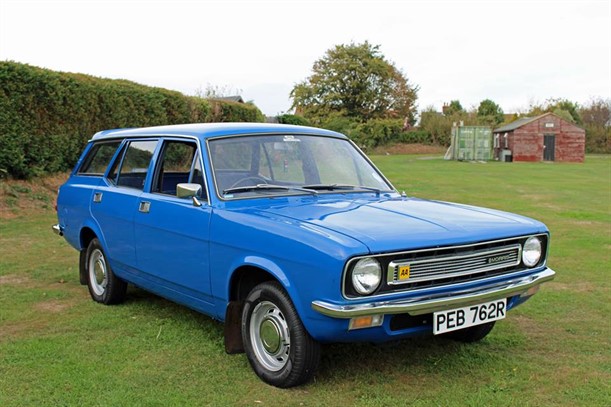