Meet The Owner – Emily Meunzberg and her Opel Manta A

For many years Opels enjoyed an ever-so-slightly exotic image in the UK compared with their Vauxhall counterparts; even the humble Kadett looked as though it was the sort of vehicle driven by an ITC bit-part actor. Official British sales of the German marque commenced in 1967, and the two brands retained separate dealerships until 1981. Then in late 1974 Emily Meunzberg’s grandfather took delivery from Bridge Motors of Skellingthorpe of a Manta A 1.9 Berlinetta, one that has been part of the family for the past 45 years.

What was Opel’s reputation in the 60s?

In the 1960s, Opel’s reputation in its home market was as “an old man’s car” with their staple models resembling scaled-down Detroit products.

Chuck Jordan, the firm’s Director of Design between 1967 and 1970, was understandably keen to alter the brand’s image and the 1968 GT had certainly created a stir. However, this left a vacuum for a mid-size sporting four-seater that would rival the likes of the Fiat 124 Coupe.

The ’67 Rallye Kadett did not quite fulfil this role while the debut of a certain Ford coupe in early 1969 intensified these plans – ‘What are we doing against Capri?’ Jordan asked his team.

What was their solution?

Their solution was a very elegant coupe based on the forthcoming medium-sized Ascona saloon and named in the tradition of the Plymouth Barracuda and the Corvette Stingray.

When the Manta premiered at the Paris Motor Show in September 1970, it dispelled the middle-aged persona of the marque - https://www.youtube.com/watch?v=bTdmz3Lg4us.

The engine choices were four-cylinder 1.6-litre (in either standard or 80 bhp form) or 1.9-litre units - plus a 1.2-litre plant that was never available in the UK.

In the early 1970s, a driver who craved a six-cylinder Opel would have to opt for the Commodore B while the Manta’s blend of looks and road manners was ideal for the younger German motorist who could not quite afford a BMW 2002.

When was the Manta available in the UK?

The Manta was sold in the USA via Buick dealerships - https://www.youtube.com/watch?v=nrOx_8iGvqM - and UK imports commenced in November 1970 where the Opel soon created its own mystique.

It looked more youthful than the Arrow-series Sunbeam Rapier, a car with the image of a bank manager at the local golf club, and it was arguably more elegant than the 1971 Vauxhall Firenza.

From the prospective of a showroom manager, the Manta had the advantage of being a tad more suave than a certain Ford rival.

If the Capri was the dream car of “Roger The Rep.”  the Opel conveyed a distinct air of being transport for an “International Man of Mystery”, an image that not even some utterly naff sales copy could dispel.

‘Why should bachelors have all the fun?’ asked an utterly cringe-worthy advertisement from 1971 which also promoted the Manta as ‘Wild and Beautiful for Five’. Far out.

One marketing lesson the Manta did share with the Capri was that it bore no resemblance to its saloon counterparts. One problem with the Kadett Rallye was that it still bore overtones of the parent model, but the Manta seemed to exist in a different world to the Ascona.

The ultimate early version was, of course, the 1.9 Rallye with its matt-black bonnet, modified suspension, a  Solex 32 DIDTA-4 carburettor, Firestone Cavalino tyres:  and, of course, twin exhaust pipes and some dramatic stripes.

In 1971 Motor Sport praised the Rallye’s combination of ‘sporting coupé with good fuel economy’ and ‘eager, light response to the controls.

What did Car think of the Manta 1.6S?

The following year saw Car test the slightly more low-key Manta 1.6S opposite the Toyota Celica 1.6 ST and appreciated the Opel’s ‘light and airy cabin,’ the styling and the fact that its design philosophy ‘really suits us’.

1972 also marked the launch of the flagship Berlinetta, which combined the 1.9-litre engine with velour upholstery, a cut pile carpet that was ‘colour coordinated’ and (naturally) a vinyl covering for the roof – ‘when you see it, you’ll know it’s just right’ Opel assured British motorists.

There was also a double coach-line, “woodgrain” inserts on the door and a ‘leatherette covered sports steering wheel’, all of which elevated the Manta above all Flash Harries in their Capri 2.0-Litre GTs.

What is the history of Emily’s Opel Manta A?

Production of the Manta A ceased in August 1975 with the introduction of its “B” successor. George left the production line in 1973 but was not registered by Emily’s grandfather until late in the following years.

Her father recalls ‘it was not the first Opel my father drove, and he had previously owned a Manta Rallye and a Rekord Estate’. Emily remarks that the Berlinetta was subsequently passed to ‘my Uncle Brian for about £400 - £500 – and my dad was the next owner’.

George was dry-stored in 1984 but was revived in 2012 ‘he needed no engineering work and no welding – just two new tyres and an exhaust’.

Today he is one of a handful of examples still on the road in this country including just six Berlinettas. His proud custodian Emily loves his svelte appearance - and to see George today is to appreciate just why they were such an aspirational car in the 1970s.

WITH THANKS TO: EMILY MEUNZBERG 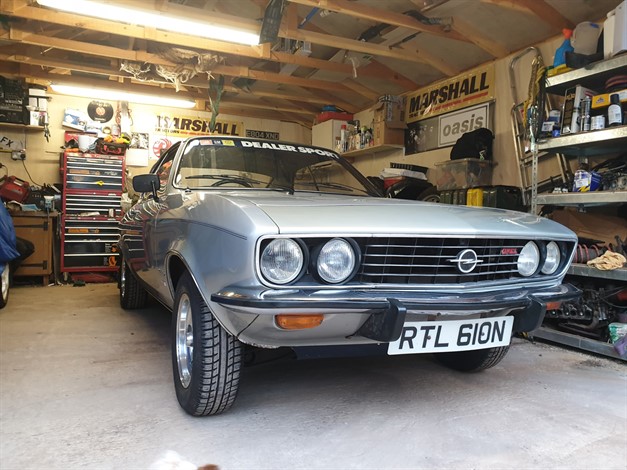 Want to insure your Classic Car?