MEET THE OWNER – MATT DEBBAGE AND HIS TRIUMPH DOLOMITE

And the answer to that question is no, for this is one of the earliest examples of the Triumph Dolomite that you are likely to encounter.

That same year, the Toledo (short boot and RWD) and the 1500 (long boot and FWD) succeeded the 1300 while the last Herald estates and convertibles left the factory in 1971.

That year also saw the demise of the Vitesse and the introduction of its replacement at the London Motor Show.

The Dolomite combined the four-door bodyshell of the 1500 with the 1,854cc “slant four” OHC engine developed with Saab and the Toledo’s rear suspension. 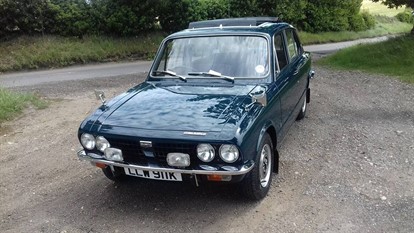 As befitting a car aimed at the motorist with BMW 2002/Alfa Romeo 2000 Berlina tastes and a Humber Sceptre/Ford Cortina 2.0-litre GXL income, the specification included a clock, a tachometer,  a heated rear screen, an adjustable steering column and a cigarette lighter for that afternoon Rothman’s Kings Size.

The price of a new Dolomite was £1,399 – the same as the very agreeable Fiat 125S and a few pounds less than the Cortina GXL.

The top speed was in the region of 100 mph, with 0-60 in 11.5 seconds, making the Triumph more than suited to motorway commuting.

Deliveries to sales outlets did not commence until early 1972, due to BL’s industrial relations issues and the  Debbage Dolomite was ordered from Halls of Finchley by a Mrs. Aboav of Blenheim Gardens in London NW2.

The keys were handed over on 1st May and, as befitting such a fine vehicle, the new Triumph came with an array of optional equipment; a folding Weathershield roof, tailored mud flaps and wing mirrors.

Post-delivery, the Dolomite was even fitted with an eight-track stereo and an electric antenna. To see LLW 911K today in all its “Mallard” blue splendour is to be reminded of how compact the Dolomite now appears – it is a four-seater unless all occupants of the rear seat are very close friends. 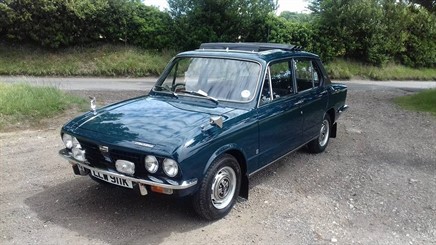 It is also rather low-key, not only in comparison with the likes of the flagship  Cortina but also the last of the Vitesse 2-Litre Mk. IIs.

The Triumph’s image may be described as a carefully crafted blend of “tradition” and modernity; formal enough for that weekend break in the Cotswolds but sufficiently up-to-the-minute to seem totally at home outside a motel in Bognor Regis.

The grille and C-pillars were matt black while the cabin was a tasteful haven of wooden cappings on the doors and a floor covered with pile carpeting.

Matt cites the choice of black upholstery as the best colour for the Broadcord “Bri-Nylon” seat trim and Triumph claimed that with such a cabin ‘the man who can get his foot down can also get his head down’.

Furthermore, ‘if any driver can’t get comfortable in a Dolomite it must be something he ate!’. In addition to the very early 1970s sales copy, the interior is awash with charming details from the spring-loaded grab handles to the rather fantastic  “all-systems go” warning light display.

The Dolomite was quite a favourite with the automotive press; Motor claimed  ‘there is no British car quite like it’ and that it was the Triumph’s ‘overall excellence, judged by such international standards (i.e. Alfa Romeo, BMW, Fiat and Saab), that endeared the car to all who drove it’.

They also pointed out that the Dolomite was ‘relaxing and effortless to drive’ and that it was ‘not ‘in any way a boy racer’.

The latter observation echoed the advertising campaign that boasted of ‘No stripes’ and ‘no GT badges’ in a not very subtle dig at certain competitors.

In the launch brochure, Triumph claimed that ‘here is a car of rare quality and distinction’ and that ‘your first trip in a Dolomite will show you what it can do – without any show-off devices’.

The message was clear – “Flash Harries” need not apply as this was the car for an up-and-coming solicitor with a copy of The Good Food Guide in the glove compartment and Johnny Mathis playing on the eight-track.

By the time BL introduced the Sprint version in mid-1973, the Dolomite brand had already created a niche in the car market. Production ended in 1980, a year before Mrs.

Aboav retired LLL 911K to its garage after less than 6,000 miles. After she passed away, the Triumph was inherited by one of her family in 1997 and its use over the next 15 years was sporadic.

Mr. Debbage came by the Dolomite in 2012, and his priorities were to see to the brakes, fit a new set of Vredestein Classic tyres and a new set of dampers. 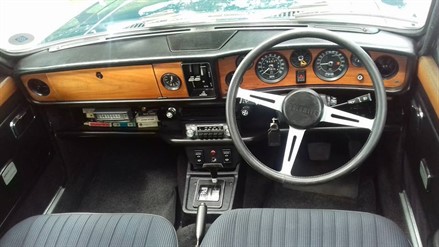 The engine presented no problems, barring a small oil leak ‘from the front of the head’ while the steel wheels (alloys were the province of the Sprint) have been shot-blasted and re-enamelled in silver and the carpets re-dyed. The engine bay has been recleaned, and the bodywork refurbished.

Matt wrote in the March 2018 edition of Triumph World:

‘The chap who did the paint took great pains to get the colour match and texture as close to original as he could. To my eyes the effect is pleasing, as it looks a few years old rather than brand new and perfect. It also avoided disturbing the very well fitting and waterproof sunroof.’

The standard Dolomite came with a four-speed manual gearbox but Mrs. Aboav opted for three-speed Borg Warner automatic transmission which Matt finds ‘lovely. The Dolomites had a unique back axle ratio just for auto cars, and it’s just right; very smooth, cruises nicely and with plenty of power’.

Today the Triumph serves as a ‘special occasions’ car - but you could well argue that any trip in such a Dolomite is automatically quite an event.

With Thanks To: Matt Debbage

Give your classic the protection it deserves and get a quote for your Triumph today.