At 10.15pm on 22nd April 1977, the BBC’s Birmingham studios transmitted the first episode of a new programme for car owners, presented by Angela Rippon and Tom Coyne. Top Gear was a half hour show that was broadcast in the Midlands region and one of the first cars featured was Ms Rippon’s own Ford Capri Mk. II. 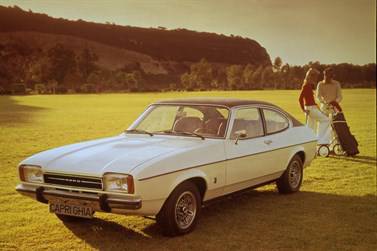 The following year saw Top Gear promoted to a weekly slot that was broadcast across the entire BBC network and in 1979 Noel Edmonds took over from Angela Rippon. Here he is with a review of the Strada that would probably have not won him many friends amongst the nation’s Fiat enthusiasts. By and during the early 1980s, it was a fixture on BBC2 and at that time, my younger self would eagerly count the hours until Sue Baker, William Woollard, Chris Goffey and Frank Page would impart the latest news about automotive developments such as the Austin Maestro with the talking dashboard or the second-generation Vauxhall Cavalier with front wheel drive.

Aside from the sheer nostalgia value of that clip, the most intriguing detail for me is the reference to the forthcoming replacement for the Ford Cortina; this was just before the debut of the Ford Sierra. A few years later, Mr. Woollard compared this fascinating line-up of the FSO 1300 (are there any left on the road in the UK?), the Yugo 45A, the Skoda 105S and the Lada Riva 1300SL. Mr. W’s politely understated list of the Lada’s defects is a further reminder of how entertaining and hard-hitting Top Gear was during this period. The impression that persists in some quarters, is that it was then mainly concerned with chaps in sensible slacks and sports jackets as they imparted vital information about the boot space of the Talbot Solara GL – are partial at best. This 1983 clip of Chris Goffey learning defensive driving in a Ford Granada Mk. II is fascinating, engrossing and altogether thoroughly entertaining, even if you may wince at the fates of a Fiat 128 saloon, a two-door Ford Cortina Mk. II and a Mk.1 Granada.

Before Top Gear, Mr. Goffey had been part of the editorial team at Autocar magazine, where his many and various experiences included ‘riding in the back seat of a Mercedes-Benz 300SEL 6.3 that was driven by Fangio’ and experiencing the full understeer of a Toyota Crown Custom Estate at 100mph on a test track.  His memories of his time with Top Gear illustrate just how varied the content of an episode might be during the 1980s, ranging from how to avoid being hijacked to, in an early episode, ‘exposing how cars used to be stored prior to their being delivered. We found new vehicles up to their wheels or in the salt air at the harbour front’. The show’s impressions of the first diesel engine Range Rover promoted complaints from Land Rover’s management but by contrast, Chris remembers the Triumph Acclaim as ‘brilliant – it was the saviour of the company’.

Chris points out that Top Gear ‘changed fairly fundamentally when it left Pebble Mill’. At that time, it was an information programme on a limited budget but by the end of the 1980s, it was starting to take the form by which it is known today, including a tall young writer who was then associated with Performance Car magazine. Many readers will note a) how ‘BBC’ his accent was in those days and b) that even at time Jeremy Clarkson’s love of the Morris Marina was already well-established.

Of all the vehicles Chris Goffey encountered, perhaps the one that made the greatest impact was ‘Black Bess’ a 1913 Bugatti Type 18 p – ‘a 5-litre supercar!’ – that was originally owned by the French aviator Roland Garros. He also has vivid recollections of the interesting cornering prowess of the Moskvitch 412 – ‘at full lock when you press the throttle’. Top Gear may have been re-vamped in 2002 but the show’s early years were its bedrock, not to mention its importance in introducing viewers to the noble art of “Woollarding”. And perhaps if future presenters could master the technique of discussing carburettors while standing with one foot on a car’s front bumper…

With Many Thanks to Chris Goffey