DVD OF THE WEEK - DANGER MAN

As a devotee of ITC’s spy and adventure series, Danger Man has a pride of place in my DVD collection. This was the TV series that made Patrick McGoohan a star when the first episode was aired in September 1960 and four years later the show was extensively revamped. The running time was now fifty minutes, agent John Drake had an Anglo-Irish rather than an American accent, there was a groovy new Edwin Astley theme tune and a Mini Cooper.  In the words of the press book this was ‘the sort of car that can get Drake anywhere at high speeds, can get in and out of places where a larger car couldn’t possibly take him and is unostentatious’. 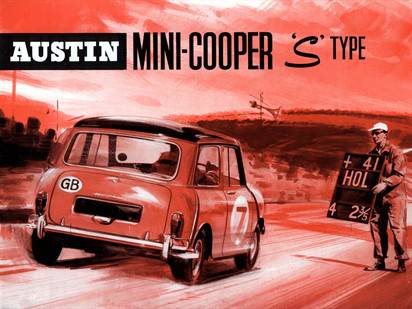 The Austin Mini Cooper 1071S was registered on 20th March 1963 as 731 HOP, which belonged to the BMC press fleet. At that time, it would have been familiar to many automotive enthusiasts as this was the very model that was tested by Autocar on 12th April 1963. ‘A practical, safe, stimulating and extremely quick little car’ was the magazine’s conclusion and at a price of £695 7s 1d it would be unlikely to have a major impact on Drake’s expense account.

However, as befitting a top international man of mystery, Drake’s Cooper S had received some interesting modifications from Taurus Engineering in the form of their Stage II conversion. With twin 1 ½ inch SU carburettors, a gas flowed cylinder head and the BMC AEA648 camshaft, the Mini was now ready for any Mercedes-Benz “Fintail” or “Adenauer” driven by enemy agents from behind the Iron Curtain. Indeed, one of the many joys of Danger Man is noting how the production had a stock pool of ‘foreign’ cars that kept appearing from episode to episode. The Mini itself was often piloted by the racing driver Phil Wicks who doubled for McGoohan.

Drake’s adventures took him around the globe, but the budget meant that ‘abroad’ meant the usual palm trees in the studio car park and driving on the wrong side of the road in the Home Counties. There is also a delightful moment in The Man Who Wouldn’t Talk in which a Bulgarian garage is using a Ford Thames 300E as a service vehicle. However, one of the many joys of Danger Man is the opportunity for noting some very fine motor cars from the Saab 92B of It's Up to The Lady to Whatever Happened to George Foster? when Drake “borrows” a police Wolseley 6/99 and sounds the bell along Shenley Road in Boreham Wood. The show was rebranded as Secret Agent in the USA, gaining a swinging new title sequence.

My own favourite editions of the series is Colony Three, where Drake investigates a replica English New Town behind the Iron Curtain. Every detail is familiar down to the Morris Minor 1000s and Vauxhall Cresta PAs in the car park, but the seemingly everyday location of the Hilltop Shopping Arcade in Hatfield is made to appear utterly sinister. Another fine episode was The Outcast, with an all too rare dramatic performance from the future Carry On team member Bernard Bresslaw, who was one of several high cable guest stars who appeared throughout the series.

Danger Man came to an end in 1966 after 47 shows as its star was to embark on a new programme concerning a hero who was not a number but a free man. But if The Prisoner is the programme that McGoohan will forever be associated with, the adventures of a cynical but very human spy in his Old English White and Smoke Grey Cooper S is not less memorable - https://www.youtube.com/watch?v=LghYopfxCs4