The early ‘whale tail’ version of the Sierra Cosworth featured as our ‘Car of the Month’ last year but it was the 4-door saloon version of this car, with its less extrovert styling, which became much more accessible to those looking for a fast Ford.  Over the 4 years that the ‘Cossie’ was produced some 25,000 vehicles were snapped up.

From 1989 to 1990, the YBB-engined Sierra boasted 204bhp and rear wheel drive. With the car weighing only 1,290kg, the 2-litre turbo charged engine could push the car from 0-60mph in an impressive 5.8 seconds and keeping the accelerator pedal pressed would take it on to a top speed of 143mph.

I owned a slightly modified one of these for a brief period and often wondered why the front side windows were not fitted with windscreen wipers, given the car’s propensity and desire to take corners sideways in the wet! It was honestly one of the most thrilling cars I have ever owned. Would I have another? In a heartbeat! 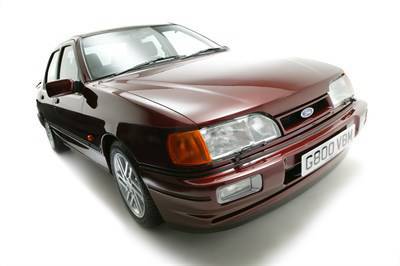 In 1990, the Cosworth gained a facelift with electric front and rear windows were added along with headlamp washers. Its power increased to 220bhp and 4 wheel drive to help that extra horse power maintain traction. The performance tweaks to this later model brought the 0-60mph sprint down to 5.6 seconds.

The thorn in the side of the Sierra was its security; primitive at best and with an active market for second hand parts, many were stolen and broken for their valuable parts. With values dropping throughout the 1990s, many cars also suffered from poor maintenance with yet more being thrashed or crashed.

Whilst the Sapphire version of the ‘Cossie’ may not be as desirable as the original ‘whale tailed’ models, values have steadily been increasing for the last 10 years and, in my opinion, this has to be a ‘top-tip’ buy for investors that haven’t already snapped one up.