As with many of my generation, I first encountered the Austin K2/Y via re-screenings of Ice Cold in Alex on television. It is a film that showcases the talents of John Mills and Anthony Quayle at their considerable best and one of the principal characters is the battered but indomitable ambulance, which was one of the key British military vehicles of the Second World War. 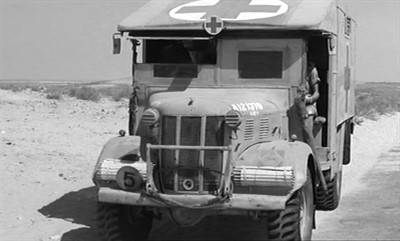 In 1939, the government stated its requirements for a military ambulance, one that would serve with all branches of the armed forces around the world in addition to working with local authorities at home. Austin’s K2 chassis, based on the civilian K30 lorry, appeared to be admirably suited for the role and Mann Egerton worked with the Royal Army Medical Corps (RAMC) to develop the coachwork.

The ambulance body was mounted on steel, bolted to an ash frame and was able to accommodate 10 ‘sitting casualties’ or four stretcher cases on double-decked bunks mounted either side. The upper tiers could be lowered to form seats and the coachwork had canvass to aid ventilation. Power was from a 3,462cc litre straight six petrol engine, which was highly robust and capable, propelling three tons of ambulance at 50 mph on a tarmac road. The transmission was via a four-speed box and drivers often needed to become acclimatised to its ratios.

The K2/Y became known as ‘Katy’ and Longbridge built some 13,102 examples between 1939 and 1945. They served with the forces of Britain and Commonwealth, with some K2/Ys being lead-leased to the USA and the Soviet Union. The then Princess Elizabeth drove the ambulance when she was a subaltern in the ATS and in his fascinating book Brick by Brick: The Biography of the Man Who Really Made the Mini - Leonard Lord Martyn Nutland observes that:

“There were many innovative features including a lead or galvanised steel water tank and an on-board compressor to inflate the tyres, although the latter were of bullet proof design. Katies were powerful, fast, manoeuvrable and easy to drive with an excellent ride that often saw them reserved for the most serious cases.”

The Austins were used in many theatres of the Second World War and after the end of hostilities, they continued to serve with the British military as well as being used by European armies. The police force of Guernsey employed an ex-military K2/Y as a mobile command post until as recently as 1975 and of course, the Austin was a principle character in a novel written by Christopher Landon, a former RAMC Major. The title of the book was, of course - Ice Cold in Alex and the feature film version made by ABPC will be the subject of a separate blog later this year. For now, I’d just like to end with an account of the North African campaign, when a K2/Y driver managed to transport 27 wounded personnel carrying them on the ambulance’s wings, rear step, bonnet and suspending additional stretchers in the rear using rifles as supports…