Put simply, this is one of my favourite British Fords, a car from the last days of winklepicker shoes, DA hairstyles and British rock & roll. The fact that Heinz Just Like Eddie Burt once drove a Consul Capri 335 seems so appropriate, for this is a car of innate glamour, from its tail fins to the radiator grille decorated with five stars.

Back in 1956, Ford GB commenced work on a new range of medium-sized products that would be ‘suitable for the golf club car park’; I.e. appeal to the buyer with definite social aspirations.  Horace Dennie, the company’s export director, also wanted a version that would lend even more excitement to the future line-up, one with overtones of the Galaxie Sunliner. Of course, Dagenham had previously made cars of glamour – every skiffle band leader and up and coming Rank film star craved a Zodiac Mk. II Convertible – but a two-door 2+2 medium-sized coupe was a genuine departure for Ford GB.

The Capri debuted in September 1961, four months after the launch of the Classic 315 saloon, and the first examples were for export only. British sales of The First Personal car from Ford of Great Britain commenced in January 1962, at a comparatively high price of £915 12s 3d, although the standard equipment list included two-speed wipers, front disc brakes and a cigar lighter. The quad headlamps were just right for the new motorway age and the coachwork was downright svelte. White wall tyres were a near essential extra on a car that was ‘very personal property. Once you get the feel of it, you won’t want to hold back’. 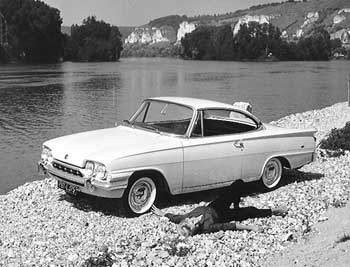 The prospective Capri owner might have also considered a Sunbeam Rapier, although the Rootes offering cost around £100 more and appealed to a rather different type of motorist. Both were two-door pillarless coupes with winding rear windows but the Sunbeam, with its walnut veneer fascia and ‘traditional’ radiator grille seemed to be geared toward chaps with a plaid sport jacket and a Graham Hill moustache. It also was a genuine four-seater while the Capri may have boasted an enormous boot its rear bench was little more than a glorified parcel shelf. Still, what did that matter in a Ford where ‘behind the wheel a man feels power – and a woman feels freedom’ - words that just have to be uttered in a Patrick Allen-style dramatic voiceover.

The engine for the Capri’s was the same 1,340cc unit as in the Classic saloon and for all the claims that this was a Ford that would glide ‘like a panther’ it was not conspicuously fast, with a top speed of 80 mph. A 1,498cc plant was available from August 1962 while for an extra £500, Hooper of Kilburn made a very exclusive Capri with a leather trimmed interior. February 1963 marked the arrival of the 78bhp GT with a Cosworth-developed engine, a twin-choke Weber carburettor, a remote-control gear lever and a tachometer apparently designed to be read by the driver’s left kneecap.

The Consul Classic saloon was replaced by the Corsair in late 1963 but the Capri continued in production until the summer of 1964. The Capri name was famously revived towards the end of the decade and for me the differences between the quasi-Teddy Boy lines of the original and the later ‘car you’ve always promised yourself’ beautifully represents the social changes of the 1960s.  To have an idea of the impact the first Capri made, take a look at this newsreel of the 1961 Motor Show and today it will turn literally turn heads. The Consul Capri remains ‘a sleek and elegant extension of your own personality’ and you can just imagine an owner circa ’62 donning a pair of Ray Ban sunglasses before cruising down his avenue towards the local coffee bar, revelling in the ‘tut-tuts’ of disapproval from his neighbours. 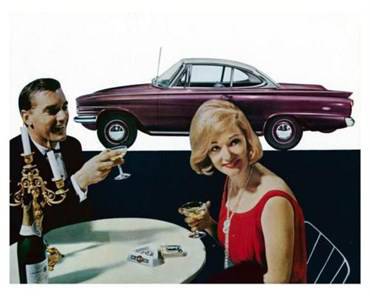