Do You Remember The Talbot Tagora?

There are some cars that almost literally became part of our everyday life but the Talbot Tagora was not one of them.

Even during its brief production run, you would have been more likely to see one in a magazine or a glossy brochure than on the road.

When Peugeot acquired the British and the French operations of Chrysler in 1978, one of the projects they inherited was codenamed C9.

This had commenced in 1976 as an intended replacement for the 180/2-Litre range, which by this point appealed mainly to Spanish taxi operators and virtually no-one else.

But C9 was going to appeal to the sort of executive who was the first chap in his avenue to sport a gold watch with an LED display – and who might otherwise have considered buying an Audi 100.

The C9’s styling was developed in Coventry, resulting in rather striking six-light coachwork while the engines were developed in France.

The base unit was to be a 2.2-litre plant based on an existing Simca unit while, somewhat ironically, Chrysler’s management was seriously considering the joint Peugeot/Renault/Volvo ‘Douvrin’ six-cylinder engine for the expensive models.

After Chrysler’s withdrawal from Europe, the new management thought that in the words of the automotive historian Keith Adams ‘C9 was far too advanced to put on ice, and decided to continue its development towards production’.

The suspension and transmission were sourced from Peugeot while the overall length was extended by two inches.

And so, the Talbot Tagora made its debut at the 1980 Paris Motor Show, with British sales commencing in spring of the following year.

October 1981 saw the arrival of the flagship SX, which was designed to appeal to all Granada Ghia drivers with its alloy wheels, electric windows and headlamp washers and wipers. 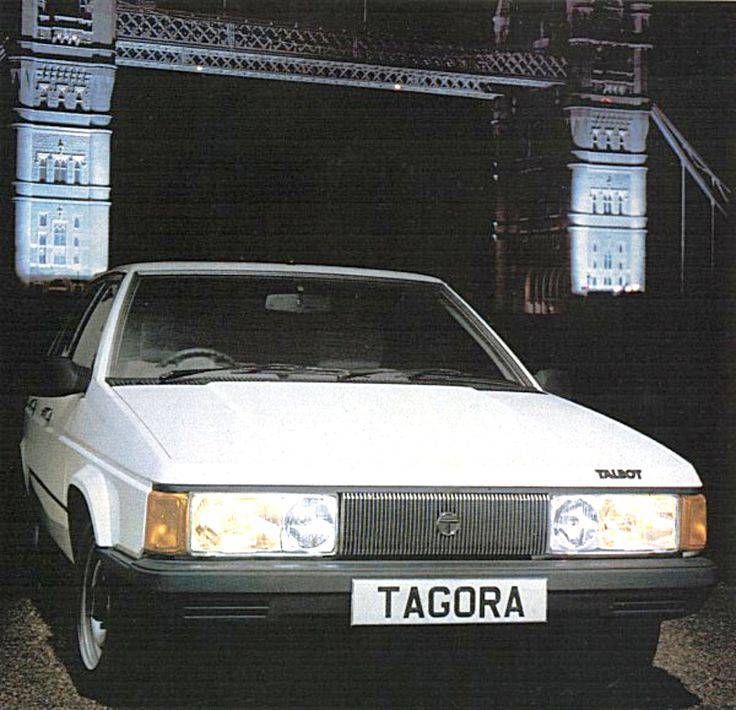 There was also a trip computer to show the world – or at least the denizens of the staff car park – what a ‘high tech’ sort of a fellow you were.

Air conditioning would have been a welcome option as the Tagora’s glass area meant that the cabin could become extremely hot.

At this point, it must be said that, despite automotive mythology, the Tagora was not a bad car; the interior was spacious, if overly dominated by the finest of plastics, and its lines were quite distinctive without being at all outrageous.

Motor Sport thought that ‘the ride and the handling are both excellent, enabling he driver to press-on hard with confidence’ and that ‘performance of the SX is quite exhilarating’. When Car tested the mid-range GLS they concluded that it had ‘more room inside and in the boot, comparable performance, better economy’ than a Ford Granada 2.3GL ‘all at a base price £550 less’.

The challenges that the Tagora faced were the impact of the second oil crisis of 1979 and the fact that PSA already had two in-house rivals.

If a potential buyer for the big Talbot saloon was probably not in the market for a Citroen CX, Peugeot’s excellent 505 saloon was certainly a very strong competitor.

A further issue was that in the UK the Talbot brand had never managed to establish a solid identity. By 1981 the Sunbeam and the Avenger, both representing the last vestiges of the Rootes Group era, were to cease production, allowing the opportunity for the Tagora to become the flagship of a reasonably cohesive line-up.

But, despite (or possibly because of) such not overly inspiring slogans as ‘Talbot Takes You Further’, too few motorists seemed to know what the brand stood for. PSA had apparently hoped that the ‘T’ badge would acquire a ‘youthful’ image, as opposed to a Hillman Hunter driver in a brown de-mob suit grumbling about those new-fangled mini-roundabouts.

One high profile British driver was Jimmy Hill, as Coventry City had forged a sponsorship deal with Talbot at the start of the 1980 football season.

Part of the agreement was that ‘the chairman and players would drive Talbot Solaras’ (!) but Mr. Hill was subsequently issued with a Tagora.

Production ceased in 1983 and today they are even more scarce than an episode of EastEnders where no-one says, ‘leave it out!’ in an Anthony Newley mockney accent.

With a longer development period, Talbot’s prestige model could have been a viable contender to the likes of the Volvo 244 or the Vauxhall Carlton.

Instead, it is a fascinating oddity from the days of Soft Cell’s cover of Tainted Love and when a car with central locking as standards was a clear sign of living the good life.