50 Years of the Austin 3-Litre

If any car deserved the title of ‘misunderstood’ it is the Austin 3-Litre, one of the last products of the British Motor Corporation (BMC) prior to the merger with Leyland and one of the most intriguing large saloons of the 1960s.

The latter was, of course, front wheel drive, but as the larger model was intended to eventually replace the A110 Westminster range it was decided to adopt a RWD format. 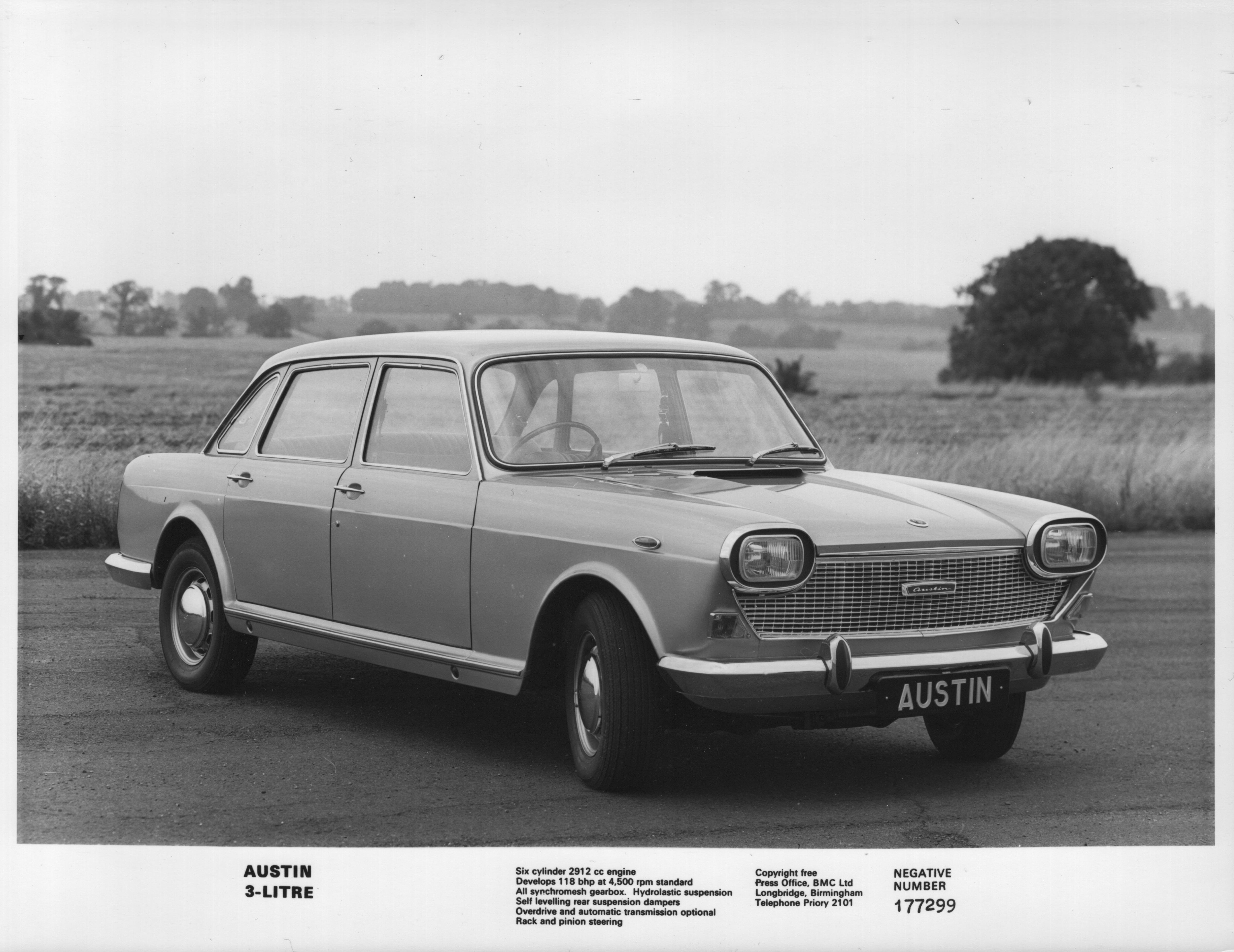 As for the coachwork, this would be a combination of the Landcrab’s central hull with a longer boot and bonnet and the overall effect was rather imposing in a municipal fashion.

Power was from a modified version of the C-Series engine that now featured seven bearings but possibly the most interesting aspect of the 3-Litre was its suspension.

The Hydrolastic set-up was to be expected but when it was combined with a self-levelling system at the rear, the result was an Austin with ride qualities that were the equal of far more expensive cars.

The 3-Litre was displayed to the motoring press in 1967 with Raymond Baxter presiding over the event.

Unfortunately, there were too many mutterings as to the new Austin’s marked resemblance to the cheaper 1800 and the words ‘aesthetic disaster’ were allegedly spoken.

BMC hedged their bets by issuing a ‘trial run’ of some 100 examples, all fitted with single square headlamps, to a select number of customers.

When full production commenced the following year, the 3-Litre now sported quad lamps and Autocar concluded their test with the observation that ‘after 2,800 miles and comparing it with detail and price with its competitors we have grown to think highly of it’.

Meanwhile, the chaps at Motor thought the Austin was ‘a good car in many ways – in some it is advanced – but it lacks the imagination and attention to detail which characterises the better continentals like the Saab 99 or the NSU Ro80’.

And indeed, the detailing could have been improved upon.

The Corporation’s accountants had ensured that the Austin had a Mini-style flashing indicator stalk, which did not enhance its social aspirations, while the level of standard equipment was respectable for a £1,600 motor car it was not on a par with the Ford Executive or the Vauxhall Viscount.

For the motorist with an extra £595 to spare, Crayford would convert your 3-Litre into a very imposing-looking estate car and for Lord Mayors whose budget could not extend to a Daimler DS420, there was the Woodhall Nicholson limousine.

Yet, despite these interesting conversions, the fact remained that the newly formed British Leyland Motor Corporation was neglecting a car that was certainly not short of promise.

A further problem was that its sales were challenged almost from the outset by the 1967 Wolseley 18/85 version of the 1800 Landcrab.

This may have lacked the 3-Litre’s luggage space but it was almost as luxurious and considerably cheaper.

As if to make matters worse for any hard-pressed dealer the 18/85 Mk. II was also available in high-performance ‘S’ guise.

In fact, a very luxurious Wolseley-badged 3-Litre was considered and it would have almost certainly have enhanced its appeal -  but this was cancelled by the new British Leyland management; as it would have clashed with the Rover P5B.

Sales of the 3-Litre ceased in 1971 and too many were banger raced but today, thanks to enthusiasts such as Neil Kidby its reputation has been somewhat rehabilitated.

The major issue with the big Austin was that it suffered from a lack of development, for it had real potential as a reasonably priced, dignified and very comfortable business transport.

And, on a personal note, it is a car that instantly impressed me ever since I saw the Austin that was ‘built like a thoroughbred’ guest star in the two episodes of the Tara King era series of The Avengers - Who Was That Man I Saw You With? and The Interrogators. Now that is true class.