We’ve got just fiveweeks to go until the Lancaster Insurance Classic Motor Show with its theme of ‘family ties’, so we asked one of our customers and his dad for their classic story. 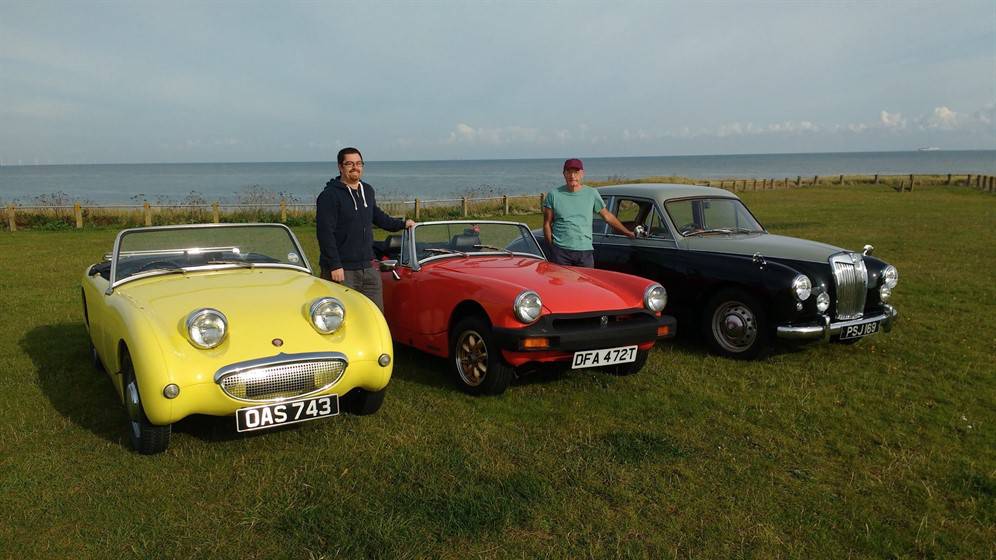 When Ian Crofts started a paper round he began saving for his own car, and longed for a Frogeye Sprite.

His first classic, a 1931 SV Morris Minor, came years later, in the 80’s, after marriage, two children and a move to a house with a garage.

Ian recalls: “I paid £1,000. It was in a sorry state, but unchanged and more or less complete.

“The only work I couldn’t undertake was reassembling the engine with newly-manufactured valve guides, recabling the brakes and replating and enamelling the radiator badge.

After new tyres and a few shake down runs, I set off for the Morris Register's London to Brighton run.

Other than a puncture, it was an uneventful, but exciting 200 mile round trip.”

It was this car that inspired Ian’s son, Matt, whose 1979 MG Midget 1500 is insured with Lancaster: “When I was about four, this shell of car emerged from Dad’s garage.

I remember sitting on the bare bones of it and hanging off the steering wheel.

Friends always jumped at the chance to join us, saying they wished their dad had an interest in cars.

I was proud of Dad’s attention to detail when working on a project and felt special going out in one of his classics. People would always be drawn to talk to us.

“My first classic was a 1969 Mini Dad bought the year before I learnt to drive.

He did most of the work but I helped fix up bodywork with fibre glass paste and brush paint the faded red to a black just like dad had with his Minor.

Unfortunately it needed a lot of welding to get through its MOT and by then I was having lessons and keen to get going.

I requisitioned Mum’s Fiat Uno and sold the Mini for about £85.

I still regret not keeping it and saving up for the work, and I’d have another in a flash.

“My MG is the car I’ve always wanted. It’s kept me busy though - after a few days of picking it up, the speedo stopped working, so I replaced the cable.

I drove it to work several times – a good 45 minute trip each way but it could run very hot.

I knew it needed some work and disaster struck on my wife’s first trip in it.

We’d gone for a ten minute drive and it was spluttering and backfiring by the time we arrived.

Later, it wouldn’t start and we had to take the tow of shame home.

I’ve now replaced ignition, radiator and steering wheel, stripped, cleaned and reinstalled the cooling system and got it through its MOT.

Ian has owned an impressive catalogue of cars including a 1950 Triumph Renown, an Austin Cambridge A55, a Ford Prefect and a Riley Elf.

Then there was the 1932 Morris Ten, bought when he was a member of the Morris Register and treasurer of the local branch of the MMOC and while he was running a Morris 1000 Traveller as an everyday car.

I’d hankered after an MG Magnette ZB varitone and found one locally this year.

It had been exported to South Africa and repatriated in 2008.

It’s in remarkable original condition with only some cosmetic deterioration to its bodywork.”

The philosophy that brings father and son together? Ian sums it up: “Do what needs to be done, tinker, drive and enjoy!”

Has your passion for classics been passed down for generations? What’s your family tie? Let us know in time for the show, we’d love to hear from you!