Do you Remember – The Ford Escort XR3 and XR3i Mk. III?

As #TeamMike is hard at work, resorting a 1989 Ford Escort XR3i for this year’s Lancaster Insurance Classic Motor Show, this is the perfect opportunity to remember the original model that caused such a genuine sensation back in August 1980.

At that time a high-performance Ford with front wheel drive was not a new concept; over the past few years the blue oval badge had adorned the Fiesta 1100S, 1300S and Super Sport; the XR2 would not be launched until late 1981.

But they were ‘superminis’ while the idea of a FWD Escort was truly radical, especially to those motorists who had been raised on generations of rear wheel drive Mexicos, Twin Cams and RS2000s. 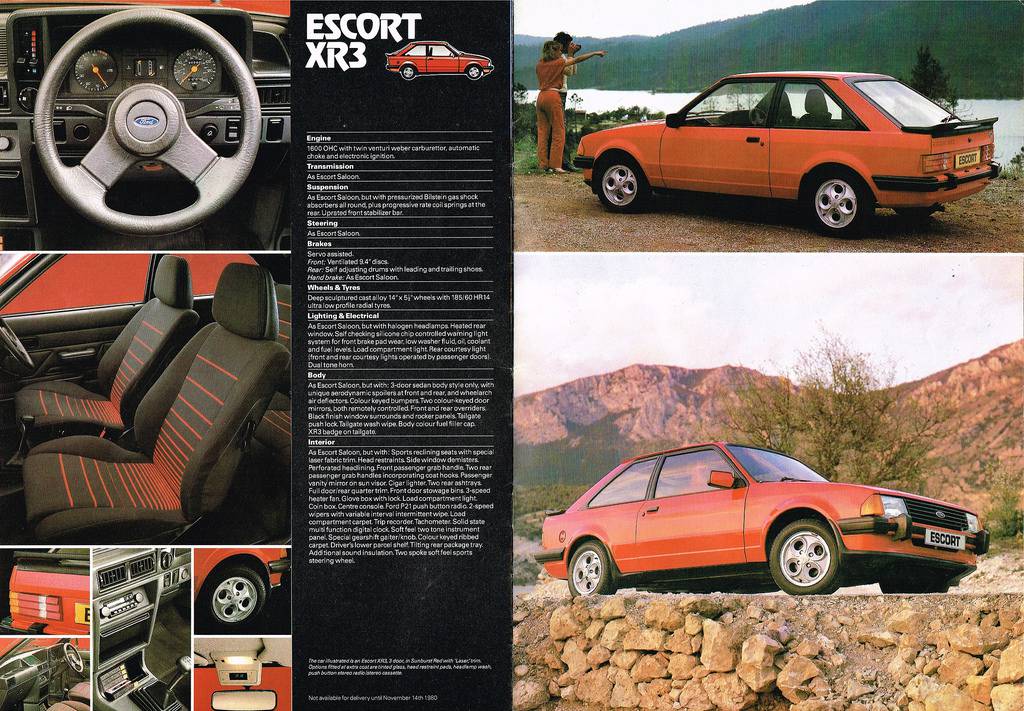 Press photos of an army of red XR3s were shot on a section of the M4 and the car with ‘efficiently engineering plus adrenalin’ certainly looked the part with its dramatic spoilers fore and aft.

Naturally, all true weekend boy racers who were respectable area sales managers during the week scanned the list of tempting options; electric windows, central locking, headlamp washers and that all-important radio-cassette player to listen to Sultans of Swing as you sped down the A316.

The pepper pot style Cloverleaf alloy wheels and 185/60R14 tyres enhanced the XR3’s clean styling while beneath the bonnet was the 1,597cc CVH engine. 95bhp from the twin-choke Weber carburettor.

A top speed of around 112 mph was very respectable by the standards of the day – and 0-60 in 8.5 seconds was an improvement over a certain German hot hatchback…

The XR3’s main rivals were the Talbot Sunbeam Lotus, the Fiat Strada 105TC, the Alfa Romeo Alfasud 1.5 Ti – and the VW Golf GTi Mk.1. Car tested the latter two opposite the Ford in 1981 and the respective performance figures make for interesting reading.

The Golf was nearly £600 more expensive than the £5,123 Escort but had a five-speed gearbox – as indeed had the slightly cheaper Alfa Romeo.

The tester bemoaned the ‘excessive engine noise’ and ‘appalling ride’ – the latter was a persistent issue with the XR - but also noted that ‘the Ford clearly has the most potential, a great deal of which is still to be realised’.

And the Escort was certainly developed, with a long-awaited fifth gear from February 1982 onwards and, in January 1983 there was the debut of the XR3i, as developed by Ron Mansfield’s team at Ford’s Special Vehicle Engineering division over the previous 16 months.

The carbs were replaced by a Bosch K-Jetronic fuel injection and although the price was now £6,278, the Escort’s top speed was now 120mph and Autocar awarded it the accolade that it ‘now represents a real threat to the Golf’.

By the time that the Escort Mk. III was replaced by the facelifted Mk. IV in March of 1986, the XR3i had already come to define an entirely new market sector, one in which ostentation and performance were equally matched.

The original XR badged Escorts are now rare, desirable and a fascinating example of the early 1980s motoring and the survivors often prompt memories of such scenes as these: