There is something purposeful about a Dolomite; the quad headlamps, the slightly aggressive stance and the wooden veneered dashboard with its ‘All Systems Go’ warning lamp cluster.  It is also the last great sports saloon to bear the Triumph badge -   and official transport for CI5 as Bodie & Doyle attempted to rid the Home Counties of over-acting hit-men.

By 1970, Triumph’s compact saloon range underwent considerable modifications. The  Toledo – short boot, RWD, two or four doors -  would serve as a replacement for the Herald, which would finally cease production in the following year, while the 1500 – long boot,  FWD, four doors – succeeded the 1300. At the 1971 London Motor Show British Leyland unveiled the heir to the Vitesse in the form of the Dolomite, which combined rear wheel drive with the longer four door body and a 1,854cc OHC ‘Slant Four’ engine’.

On seeing the Dolomite, smooth types whose role model was Tony Curtis in The Persuaders! began to scheme their way to raising the necessary £1,399. The new Triumph boasted an adjustable steering column, reclining front seats, a heated rear window, full instrumentation and – for that vital executive appeal “Bri Nylon” upholstery. “Sundym” tinted glass was a very worthwhile extra for £20 as it accentuated the Dolomite's ‘International Man of Mystery’ appeal. The Michelotti styling was redolent more of the early-mid 1960s than the era of flared trousers and really bad hairstyles but it was still elegant. Indeed, from a 2018 perspective, the Dolomite has dated rather better than cars that favoured ultra-1970s lines, especially as British Leyland did not go over the top with modifications to the 1500’s body.

The appetite of would-be Dolomite owners was further whetted by a Motor report in January 1972, which stated that ‘overall excellence’ was such that it ‘endeared the car to all who drove it’.  The price undercut overseas competitors such as the BMW 1602 and Saab 99 and the Triumph was also cheaper than the Ford Cortina 2000 GXL and the Humber Sceptre.  For anyone who wanted a plush, compact four-seater capable of over 100 mph, the Triumph was the ideal choice but  ‘industrial problems’ – a phrase that would became synonymous with BL – meant that it would not enter production until autumn of that year.

Meanwhile, back at Canley, Spen King and his team of engineers were working on a very potent version of the Dolomite and when the Sprint was unveiled in June 1973 it was the first mass-produced multi-valve car in the world. With its 16V 2-litre power plant, top speed of nearly 120 mph, alloy wheels and (but of course) a vinyl roof, BL could now offer an alternative to the BMW 2002. A price tag of £1,739.84 represented excellent value for money and if the first examples could only be ordered in Mimosa Yellow, this was no drawback as you would not drive a Sprint if keeping a low profile was your main priority. An Autocar test was headlined with the simple words ‘Britain Shows The Way’ and included such phrases as ‘sparkling performer’, ‘responsive handling’ and ‘tremendous fun to drive’ – i.e. the latest Triumph was an absolute gem.

1973 also saw the 1500 replaced by the RWD 1500TC and two years later the entire range shared the same body shell and name of Dolomite. The 1300 and 1500 had the Toledo nose, the 1500HL and 1850HL had the black grille and four headlamps while the Sprint was indomitably the Sprint with overdrive now a standard fitting. We should also mention that the when  the first season of The Professionals aired on ITV, a white Triumph – registration POK 79 R – was very much a star of the show.

For many, the question remains as to why BL did not use the Dolomite as the basis for future generations of sports saloons and the sad answer is ‘money’. A facelift courtesy of Giovanni Michelotti had to be cancelled on the grounds of finance, and the replacement for the 1300/1500 would take the form of the Acclaim. But there was not be no successor to the Sprint, leaving the market to the likes of the BMW 323; a missed opportunity if ever there was one. It really was – and is – a great motor car and here is a reminder of the flagship Dolomite in its heyday: 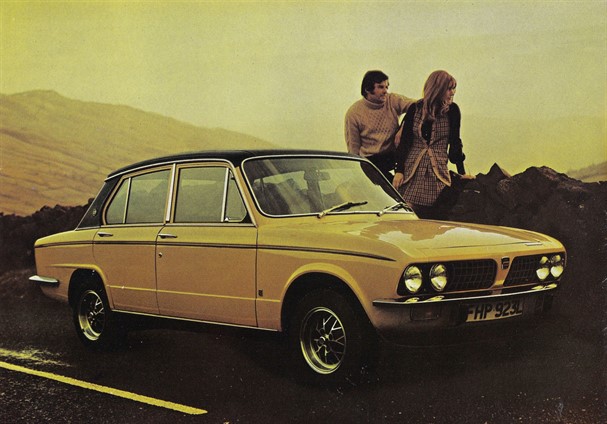