In late 1980 there was one question constantly asked by the nation’s racing enthusiasts, fans of The Professionals , and, to be quite honest, boy-racers - how could any FWD hatchback possible match the RS Escorts? But this was before they caught sight of the new XR3, a car that was just made for dashing along the M3, slim-line briefcase on the back seat and Peter Gabriel’s Games without Frontiers blaring from the speakers. And at Baron’s “Classic Winter Warmer Sale” on the 27th February at Sandown Park, there is an opportunity to buy a magnificent Sunburst Red example that is said to be one of the three remaining press launch models - http://www.barons-auctions.com/auction_details.php?aid=33&cid=2091

The XR3 made its debut towards the end of the year and it attracted huge amounts of attention on the grounds of its appearance alone. At this time, the market leader was the VW Golf GTi, which had only been available in RHD form in the UK since 1979, while other tempting rivals included the Alfasud 1.5 Ti and the Lancia Delta 1500. The latest sporting Escort could be distinguished by its “Cloverleaf” alloy wheels, the exceptionally unsubtle arches and the vast spoiler on the tailgate while its 1,597cc CVH engine made the XR3 capable of 113mph. Ford proudly boasted that here was ‘a red-blooded sports car’ and urged motorists to make an appointment with a dealer if they wished to ‘stir the adrenaline’.

On a slightly more mundane level, there was space inside for a family while a price tag of £5,123 made the XR3 cheaper than the Golf. Ford had also stolen a march on Vauxhall – the Astra GTE would not appear until 1983 - and there would be no comparable BL offering until the MG Maestro EFi of 1984. Some owners bemoaned the lack of a fifth gear, a situation that would not be rectified until early 1982, but I do recall that by the end of 1981, the XR3 could often be seen in the nation’s corporate car parks. To gain an impression of the impact the Escort with ‘phenomenal road holding’ would have made some 37 years ago, just take a look at almost any photograph of a provincial street scene. In this realm of ageing 1970s and 1960s vehicles, just-out-of-date punks and diesel-grimed Leyland Atlantean buses, a new Escort XR3 would have appeared to be a vision from the future.

In January 1983 the XR3 was succeeded by the fuel injected XR3i, and over the course of the 1980s and early 1990s it seemed that the older model was often neglected. The inevitable result was that their numbers are now fairly limited, which makes the Escort being auctioned later this month all the more fascinating. According to Barons, ‘Inline with launch cars, this example has electric front windows, tinted glass, upgraded radio cassette player, genuine Ford spot and fog lamps, head restraint pads and a factory sunroof’, which is a specification to gladden the heart of the most ambitious sales rep. Whoever buys TTW 100W will not only gain an artefact of motoring history but a car that is the opposite of ‘low-key – although the XR3 was never about restraint… 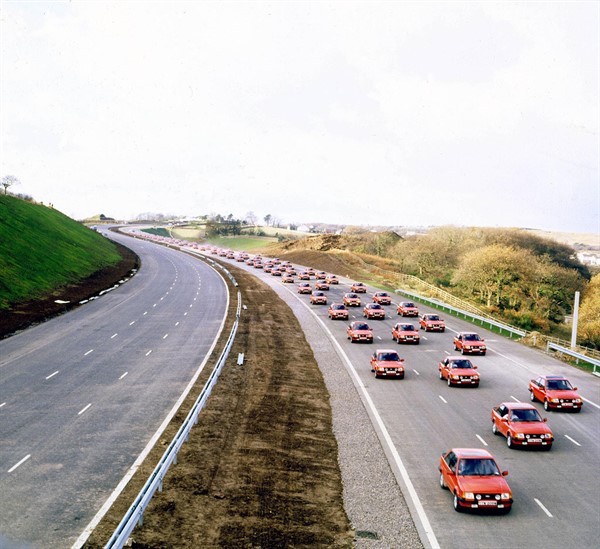