‘The remarkable thing was that the little car did not look remarkable: its virtues were matters of engineering not mere styling…In the numerous new standards it set, the Fiat 128 was quite exceptional’. That is how the late great L J K Setright regarded the Car of The Year 1970, a vehicle that in its innocuous way set new standards for small mass-produced saloons. In the early 1970s, you might not have given a neat but low-key Positano Yellow 128 a second glance if you encountered one parked outside your local branch of Carrefour. But beneath that sober exterior was the first Fiat powered by a front wheel drive engine, their first car with a transversely mounted power plant.

When the 128 was being planned, the company’s chief engineer Dr. Dante Giacosa used the 1963 – 1970 Primula saloon which was manufactured by Fiat’s subsidiary Autobianchi as a testbed for perfecting the FWD formula. It was also decided that the new model would have its engine mounted on unequal length half-shafts, which allowed the power plant and transmission to sit next to each other. The  Aurelio Lampredi designed SOHC 1.1 litre unit had a light aluminium alloy cylinder head and a direct overhead camshaft driven by a rubber toothed belt and the new Fiat also featured front disc brakes, all-independent suspension and rack & pinion steering. The cabin was remarkably spacious, given the modest overall dimensions and the standard fittings included a hand throttle. As with any great car, there were a few idiosyncrasies - the fascia layout looked as though factory workers had hurled various switches at the dashboard while in the dark – but these details were overlooked by the keen motorist.

The 128 was launched in March 1969 with some rather splendid television and cinema advertising campaigns although I am still not sure about the meaning of this pelican-themed commercial. The body choices were two and four door saloons and the three-door Familare estate. Two years Fiat homologated the 128 as the Rally, which boasted a 100-mph top speed, a new 1290cc engine, with a twin-choke Weber carburettor, auxiliary lamps and some (justified) “go-faster stripes” -  https://www.youtube.com/watch?v=FeAw6gGxIDc.  The 1974 Special was an extremely appealing blend of the four-door coachwork and the Rally engine and the entire range was facelifted in 1976, as celebrated in this (very) enthusiastic advert.

The debut of the Ritmo/Strada in 1978 marked the twilight of the 128; by 1979 the range had been cut back to the 1100 two-door saloon and Italian production finally ended six years later. However, this was not the end of the story as a version of the 128 was still being made by Zastava of Serbia in 2008 and in Egypt as the El Nasr until as recently as 2009. Meanwhile, British enthusiasts are very unlikely to encounter any 128 saloon or estate as their reunion for corroding virtually at will was no myth. But the Fiat’s impact can be seen in countless generations of small cars from around the globe, for as Mr. Setright noted ‘Modest in size and brilliant in detail, it was this car which confirmed the pattern for all popular manufacturers to follow’. And even Enzo Ferrari drove a 128. 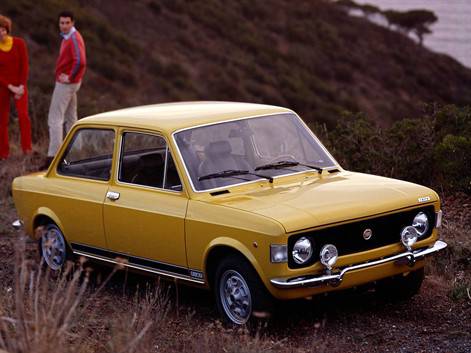