Visitors to the Lancaster Insurance Classic Motor Show will have had the chance to see some of the cars that defined a certain type of motorist – the boy racer. So, Englebert Humperdinck sideboards immaculately shaped and Luncheon Vouchers at the ready for that ‘business dinner’ at the local Berni, here are five GTs worthy of the most go-ahead sales rep. 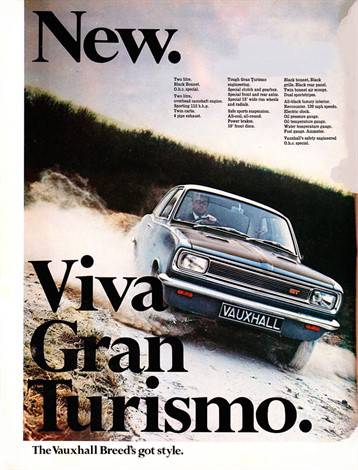 Take the two-door body shell of the Viva HB, add a twin carburettor version of the 1,975cc slant four engine from the Victor FD, a matt black bonnet with air scoops, ‘sports wheels’, four exhaust stubs, and extra instruments (including an oil temperature gauge) and you have the first Vauxhall to be badged as a ‘GT’. A price of £1,062 12s 10d made the Viva that was indeed ‘all go’ an attainable prospect for many young professionals – ‘fast but not furious’ in the words of Motor magazine. 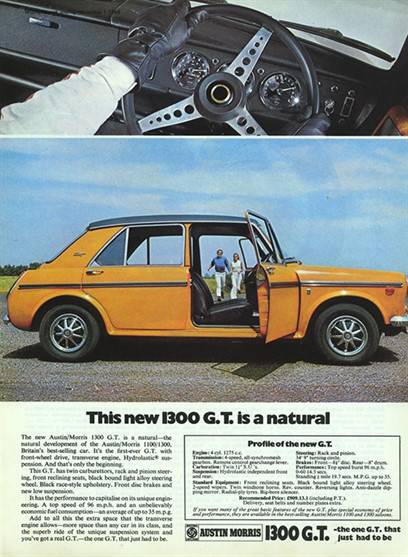 In late 1969, the Austin and Morris 1300 GT serves as a replacement for the Riley 1300; only in the chaos that was BLMC could two models replace one in the name of rationalisation. While the outgoing model boasted leather upholstery and a walnut veneered fascia, but the new model was set for the 1970s with its vinyl roof (of course), a light alloy steering wheel and decidedly flamboyant hubcaps. This was ‘the one GT that just had to be’, with the advertisements informing downtrodden male drivers that here was an ADO16 variant designed to soothe the ache of your repressed instincts’. Liberation from domestic duties - all for just £909 13s 1d. 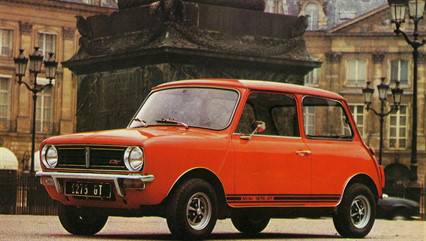 Not a replacement for the Cooper S, which carried on in Mk. III guise until 1971, but for the 998cc Cooper Mk.2 – indeed the publicity claimed that it ‘carried on where the Cooper left off.’  The square nose was created by Roy Haynes, the winding windows were quite a revelation to owners of older cars (although they had been fitted to the Australian-built models as early as 1965) and, as befitting its GT status, there was a tachometer as standard.  Power was from the A-series 1,275cc engine in single SU carburettor guise and acceleration of 0-60 in 13.3 seconds was highly respectable. 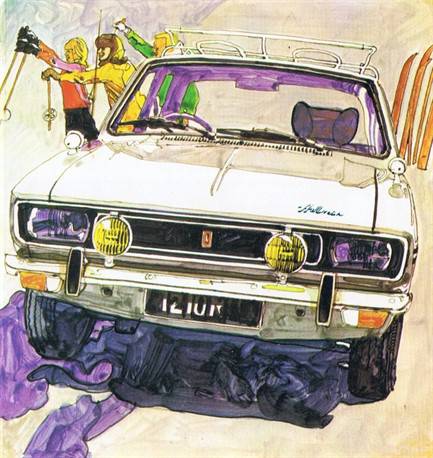 ‘100 mph and very hairy’ – that was Rootes’ claim for the Hillman GT, even if it made their latest car sound like transport for Oddbod of Carry On Screaming fame. The engine was a Holbay-tuned version of the 1,725cc unit fitted with twin Zenith Stromberg CD150s and the promised top speed was 100 mph. The body was decorated with stripes, there were Ro-Style wheels and inside, a rev counter was perched atop the fascia. And, as befitting a Hillman aimed at the would-be Jackie Stewart sector of the market, there were racing style high back front seats and a special steering wheel. After all, this was a ‘GT that earned its badge the hard way’. 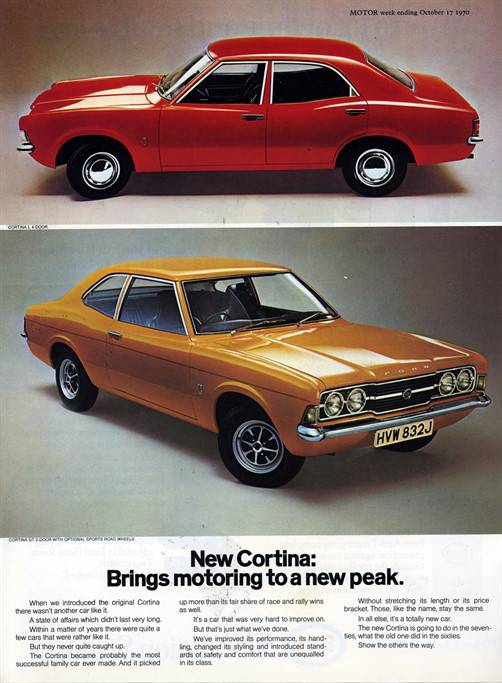 It is sometimes forgotten that the GT-badged Fords of the 1960s – the Cortinas Mk. I and Mk. II, the Corsair and even the original GTs were very low key in appearance, their status denoted via a shield badge on the rear wings. However, the Mk. III positively revelled in its aggressive appearance. ‘New Cortina Brings Motoring To A New Peak’ was Dagenham’s modest claim and the ‘Gran Turismo’ offered quad headlamps Ro-Styles, and the option of the 2-Litre OHC Pinto engine. ‘An impressive eyeful of a car, especially when turned out in one of its more attractive colour schemes’ mused Car in 1971.