FIVE STAR FORDS AT THE NEC

Last year all four generations of Dagenham’s big saloon were represented at the Lancaster Insurance Classic Motor Show and there was also a rare opportunity to see a complete ‘Mk. I’ line-up on the ‘Five Stars’ club stand. Back in October 1950, trilby hat-wearing visitors to Earls Court were highly impressed at the four-cylinder Consul and its Zephyr-Six counterpart with their up-to-the-minute styling (‘Leadership in Style and Beauty’) that was so different from every previous British Ford. The bodywork was of all-steel integral construction and these were also the first mass produced British cars to feature MacPherson Strut independent front suspension. Indeed, they were so up to the minute that they even lacked starting handle brackets.

68 years ago, Ford GB was Britain’s leading car exporter and the delivery times for new home market cars was expensive – think in terms of years rather than months – but the Consul and Zephyr-Six were well-worth adding one’s name to the waiting list. The former was powered by a new 1,508cc OHV engine while the latter boasted a six-cylinder 2,262 unit, which was a highly useful sales tool as compared with its four-cylinder Austin A70 and Standard Vanguard rivals. One gem of advertisement had a ‘test pilot’ (with a Terry-Thomas moustache) boasting that the Consul’s over-square engine had ‘the unmistakable life and sparkle of a sports car’, which was mild hyperbole even in the 1950s. Meanwhile, a ‘Lady Doctor’ (sensible hair, stethoscope) found that this was a Ford that ‘satisfies your pride as well as your pocket’.

What both models offered was space, a sense of modernity, robust mechanics and, in the case of the Zephyr-Six, respectable performance for quite a reasonable outlay. ‘It can be said, of the Consul and Zephyr-Six, that” Dagenham has done it again !"’ exclaimed Motor Sport and for £829 1s 1d. the fortunate Zephyr owner acquired a car that was capable of 80 mph with a three-speed column change that was one of the nicer examples of the breed. One anachronistic detail was the vacuum operated windscreen wipers; in fact, the first British Ford to be equipped with an electrical system was the 1959 Anglia 105E. Abbotts of Farnham offered an estate car conversion and for the motorists who craved that touch of glamour, there were the soft-top versions. The Zephyr-Six convertible even boasted power operation of the hood to the coup-de-ville position, thereby making the neighbours think that you were the Anthony Steel or Diana Dors of outer suburbia.

Perhaps the key year for the ‘Five Star Fords’ was 1953 when Maurice Gastonides won the Monte Carlo Rally at the wheel of a Zephyr-Six and there was a new flagship in the form of the Zephyr-Zodiac. At a time when sugar rationing had only just ended this would have seemed not so much luxurious as positively decadent; fog, spot and reversing lamps, a cigar lighter, roof-mounted clock, leather upholstery, whitewall tyres, two-tone paint, a heater and windscreen washers were all included in the £851 price tag. There was also a higher compression ratio than on the Zephyr-Six’s engine and with an aftermarket Raymond Mays conversion of an alloy twelve-port head, twin SU carburettors and a modified inlet manifold, your Zodiac might even be capable of nearly 100 mph.

The ‘Five Stars’ Fords were replaced by the second-generation Consul, Zephyr and Zodiac in early 1956, three names that still resonate today when you think of motoring of the 1950s and 1960s. And for an idea of the excitement that the original models created - https://www.youtube.com/watch?v=aiVvGSQNn5U 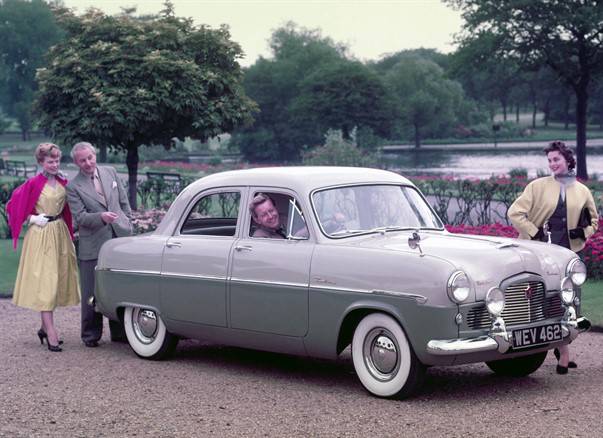