A two-door saloon with a transversely mounted engine driving the front wheels, rack and pinion steering and independent suspension that debuted almost years before the Mini. Indeed, it is often forgotten that the Trabant P50 was a rather remarkable small car when it made its bow some six decades ago – and it was not the ‘cardboard car’ of popular mythology. 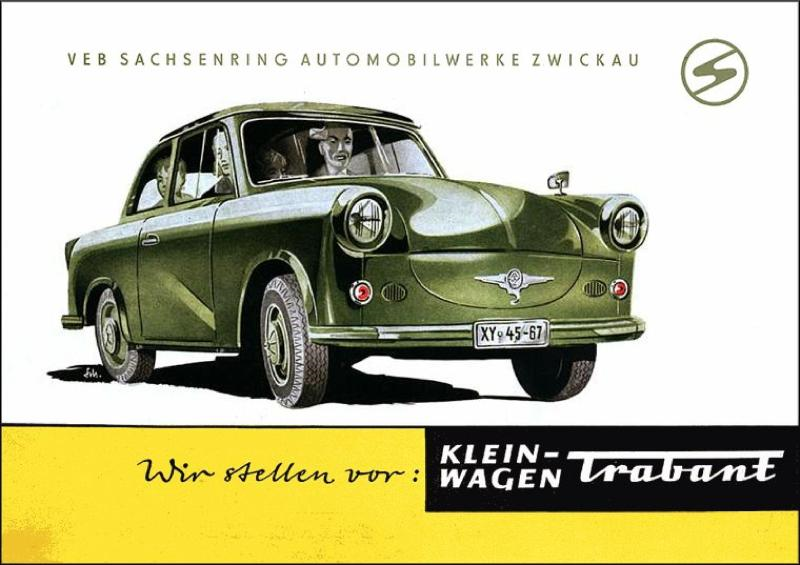 After the Second World War, the motor industry of East Germany was based on the old Auto-Union plant in Saxony. By 1953 the government issued a decree that that IFA (‘Industrial Association for Vehicle Construction) should build a new ‘People’s Car’, a four-seater saloon that would weigh no more than 600 kg. By October 1956 a prototype was displayed to senior officials.

The P50 (‘P’ for plastic) was created under the supervision of the factory’s chief designer Werner Lang and it was to be powered by a 499cc two-stroke engine.  This meant for a top speed of just 56 mph and by the late 1950s this was already seen as an outdated, noisy and polluting motor – anyone who has seen an early Saab 96 or a Wartburg Knight start up will recall the clouds of blue smoke. However, it was easier and cheaper to manufacture than a four-stroke unit. The unit lacked a fuel pump and so the carburettors were gravity fed; one moderately terrifying detail was that petrol tank was situated in the engine bay.

The P50’s body would consist of a monocoque steel frame supporting outer panels made from artificial materials, a decision that was largely dictated by political and economic reasons.  Two years earlier the US government had passed the Mutual Assistance Control Act which placed an embargo on imports to the Eastern Bloc. The resulting shortage of raw steel resulted in the factory employing Duroplast which was essentially a mixture of plastic and resin that was reinforced by recycled cotton or wool.  It was a logical solution given that VEB could acquire vast amounts of cotton waste from the Soviet Union for a very low outlay while phenol resins could be sourced from the local dye industries.

When the P50 was officially launched in November 1957 it was intended to both to appeal to overseas markets to earn hard currency - https://www.youtube.com/watch?v=sso1DQgCafI -  and as a symbol of an alternative modern socialist society to the decadent West. When full production commenced in February 1958, it was under the brand name of ‘Trabant’ although a price tag of  8,440 Marks, which was equivalent to the annual salary for a DDR worker, limited its appeal as a ‘People’s Car’.

By contrast, an export P50 cost a very reasonable 3,656 DM in West Germany and to a budget-minded motorist a new Trabant certainly looked more up to the minute than the VW Beetle - its styling had faint overtones of the contemporary Goggomobile T250. It was also more spacious family transport than the BMW 600 and it was ideal for the home mechanic. The P50 was designed to be easily maintained and so the power plant was held in place by just six bolts and inside, a dashboard-mounted gear lever increased the cabin space. The instruments were very easy to read as they were somewhat few in number as a dip stick for the fuel tank was regarded as an adequate substitute for a petrol gauge.

In 1960 the saloon was joined by the steel roofed Universal station wagon but the ultimate Trabant P50 must be the 1961 ‘Camping’, the estate fitted with reclining front seats and a canvas sunroof. In 1962 the P50 was succeeded by the 599cc P60 ‘600’ but by that time the factory was already planning the new 601, the Trabant forever associated with U2 album covers. The final 600 estate was built in 1965 and if anyone has doubts that a Trabant lacks style, just look at this ultra-hip commercial - https://www.youtube.com/watch?v=f-vl3UufT5c