50 YEARS OF THE VAUXHALL VENTORA

A car does not have to be riotously expensive to convey a measure of true style – a fact that is demonstrated by the original Vauxhall Ventora. On its launch in February 1968, all business types worth their Luncheon Vouchers immediately cajoled their fleet manager for the ‘smooth 6-cylinder 140-horse fireball’. 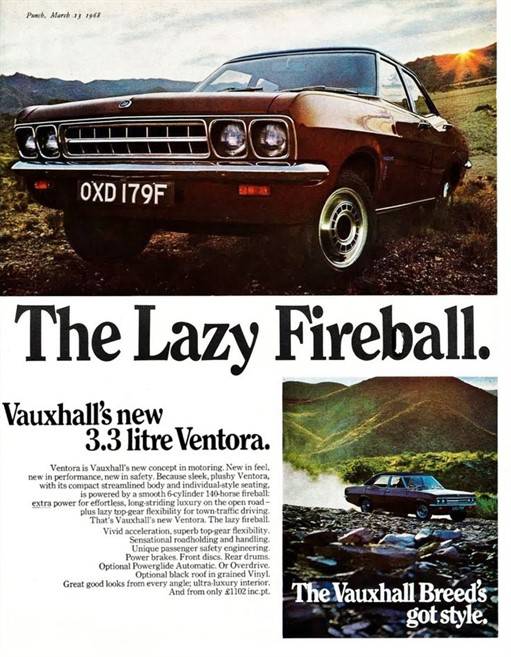 In essence, the Ventora was a clever blend of the FD Victor body shell – itself only a few months old at the time – with the 3.3 litre engine from the PC series Cresta. The original plan was to call the new FD the “Ventura” but as this was already used on a Pontiac, the advertising guru Mr. Murray Walker devised name Ventora plus the slogan ‘The Lazy Fireball’. By the standards of 1968, the Ventora was an unusual British car; Roger Bell of Motor believed that ‘there is nothing else comparable in accommodation, performance and six-cylinder refinement at this price’. The  Rover P6 3500 and Triumph 2.5 PI also debuted in that year but they were far more expensive while the Ford Corsair 2000E had a V4 engine and the Wolseley 18/85 “Landcrab” occupied a rather different sector of the market.

The Ventora was not especially well-equipped – the front seats had fixed backrests – but at a price of £1,102, the Vauxhall was quite a bargain and you would have to be an utter square not to specify the £9 10s optional vinyl roof. The lesser Victor 1600s had a three on the column but the FD flagship came with four on the floor and although Powerglide automatic was available most keen drivers was happy to pay a £45 premium for overdrive. The package also included extra instruments and that distinctive “harmonica” radiator grille and some extremely smart wheel trims

Luton’s tireless PR department ensured that a white Venotra starred in Department S as transport for Joel Fabiani’s grim-faced ex FBI agent Stewart Sullivan. As a crime-fighter who was tasked with fighting evil, rotten continuity and quite often the script every week, only a car as ultra-hip as the Ventora would suffice. The same Vauxhall also appeared in Randall & Hopkirk (Deceased); the two ITC series were filmed back to back.

In May 1968, the very appealing Victor 3300 estate combined the Ventora’s engine with the trim of the cheaper FDs. ‘Spread yourself into the space age’ urged the advertisements. Vauxhall originally planned to replace the FD range for 1970 but financial issues meant that the FE series would not make their bow until March 1972. As an interim measure, the Ventora was facelifted as the ‘Series II’ in October 1969, gaining a new fascia and the long overdue option of three-speed automatic transmission. There were also reclining front seats (at last), not to mention two-speed wipers and a range of ‘Starmist’ metallic paints, all of which helped to maintain the Ventora’s profile until the advent of the FE.

There was also a fascinating post-script to the Ventora story in the form of the 137mph Black Prince - a Vauxhall with Gordon-Keeble connections. After the sad demise of that great marque, Mr. George Wansborough, one of the company’s backers, owned a number of surplus 5.4 litre Chevrolet V8 engines – which found their way into the world’s ultimate FD. According to Autocar, two Black Princes were constructed, one with automatic gears and a manual-box version with the magazine evaluating the latter in June 1972. At £2,950 it cost more than a Jaguar XJ6 but the tester thought that ‘for a performance conversion, it is harder to think of a greater transformation’.

However, a standard model is more than sufficient to make an impact in society circles and/or your local service station, for one very good reason. Some vehicles are so dull that they virtually have absence – but the Vauxhall Ventora FD is a vehicle of definite presence.