60 YEARS OF THE AUSTIN GIPSY

During the 1970s and 1980s, you might have encountered a well-used off-roader that, from a distance, at any rate, resembled a Series II Land Rover. On closer scrutiny, it turned out to be the far rarer Austin Gipsy, the British Motor Corporation’s highly ambitious bid for the 4x4 market. Back in February 1958, any farmer or vet who was looking for a new 4x4 would probably have considered the new Austin, with the all independent “Flexitor” suspension.

The engine choices were the 2,199cc “Big Four”, as previously used in the A70 Hereford and Hampshire, or a 2,178-cc diesel and the four-speed transmission had synchromesh on the upper three ratios. A transfer box allowed the driver the options of low ratio four-wheel drive or high ratio rear wheel drive. A potential sales drawback was that there was only one chassis length on offer and another was its steel coachwork. The salesman would have doubtlessly assured any potential customer that as the bodywork had been given the ‘'Rotodip’ treatment, it would prove as durable as aluminium. As it happened, the Austin Gipsy was to prove notoriously rust-prone. One key export territory was Australia, and in 1959 Modern Motor thought that ‘Austin’s new four-wheel-drive job wins out on power and engine simplicity – but Land-Rover is better on rough stuff and in water and mud’.

By 1960, the Series II featured altered suspension, better ventilation and, at last, the option of a longer body and two years later the Series IV G4 (the Series III had been by-passed) had a new grille, more power and was available with semi-elliptic springs. BMC could now sell you 25 individual versions of the Gipsy although there was still no five-door equivalent to the Land Rover Station Wagon. When Autocar evaluated a Gipsy in 1965, the extras list ranged from a passenger windscreen wiper (£3 10s), door locks (£2 3s) and sun visors (30 shillings each) to a winch for £95.

There were also some elaborate PR stunts and the Birmingham dealer Evans & Kitchen went so far as to construct a 1 in 1 slope on the wall of their premises to demonstrate the Gipsy's hill climbing prowess. In June 1962, a team of London University students used an Austin to climb Ben Nevis while Public authorities were major customers, including the Home Office who during the 1960s stored fleets of Gipsies in depots across the UK in the event of WW3. Surprisingly, this cheery thought did not find its way into BMC’s publicity materials

The BMC/Leyland merger of January 1968 meant the end of Gipsy production, and it was phased out before the end of the year. This did not mark the end of the Austin/Morris division’s 4x4 plans, as they had devised an off-roader named the Ant which was based on the ADO16 – more of which next month. Of all variants, my favourite is the fire tender, which found service in several county forces and this 1961 vintage footage is of a Cornwall appliance in action at St. Ives A thoughtful design that helped to save lives – the Austin Gipsy’s legacy is indeed a proud one - https://www.youtube.com/watch?v=ZMByNJYiKjw 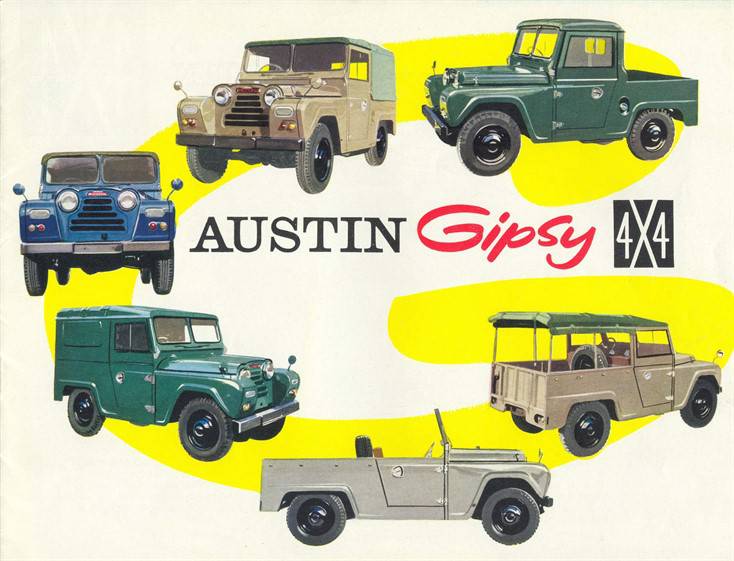