WHAT IS YOUR NUMBER ONE CLASSIC?

I have a theory, which may well be entirely inaccurate, that your favourite classic is frequently dictated by seeing it on screen while at an impressionable age. For some, it was watching a Polar White Ford Escort RS2000 Mk. II speed through Buckinghamshire with a perm-haired CI5 agent at the wheel and for others it was the Jaguar S-Type coming to grief in the pre-titles sequence of Stoppo Driver, one of the finest episodes of The Sweeney. It could be the unfortunate Rover P6B in The Gaffer - https://www.youtube.com/watch?v=_J_RX0dJFkE, the Ropers’ Reliant Regal in George and Mildred or Vyvyan’s Anglia 105E in The Young Ones.

Nor does it matter if the programme is fairly obscure. There are still those of us of a middle-aged vintage who recall the Bedford CF from the sitcom Cowboys or how most of the human cast of Howard’s Way was out-acted by various Bentleys. Then there are the films, those aired on BBC2 or Channel 4 in the afternoon or early evening – Edward Woodward in Range Rover urging the villain in Callan to ‘turn left Schneider old son, turn left’ or the “psychedelic” Morris Minor Tourer in Bless This House. For me, it was the police car in the 1961 Miss Marples picture Murder She Said which was, of course, a Wolseley 6/90.

Today the big Wolseley is far more seldom seen at car shows than its smaller Magnette ZA/ZB stablemate, but its Gerald Palmer styling is equally as well-balanced as the MG. When the 6/90 replaced the 6/80 in 1954, thousands of motorists immediately craved this epitome of respectability while constabularies across the UK placed orders. Meanwhile, the famous stunt firm Action 999 cars could provide your film or television production with a polished black Wolseley squad car and an expert driver – telephone AMBassador 1434 for further details.

Even the most devoted fans of the 6/90 will not claim that it has the best road manners of its era, but it is dignified – indeed imposing from many angles – and well appointed, with adjustable steering, full instrumentation and, naturally, leather upholstery. My favourite memories of the mighty Wolseley are of one swaying all over the highway in pursuit of a tuned Ford Zephyr Mk. 2 in the 1959 B-film The Dover Road Mystery and of a 6/90 gallantly trying to outrun an Aston Martin DB4  GT in The Wrong Arm of The Law - https://www.youtube.com/watch?v=7i1LltZE4q4. The film might have truly appalling acting, directing and script – I am still haunted by a memory of a 1962 micro-budget feature entitled Danger by My Side – but the Wolseley could make the direst of epics watchable.

Many of these titles will feature in blogs for 2018, so here I will restrict myself to a brief reference to what is possibly the greatest 6/90 film – the brilliant Stanley Baker crime thriller Hell Is a City which featured genuine police vehicles from the Manchester region - https://www.youtube.com/watch?v=W4bRPiumjuo. Such images have dominated my taste in cars for 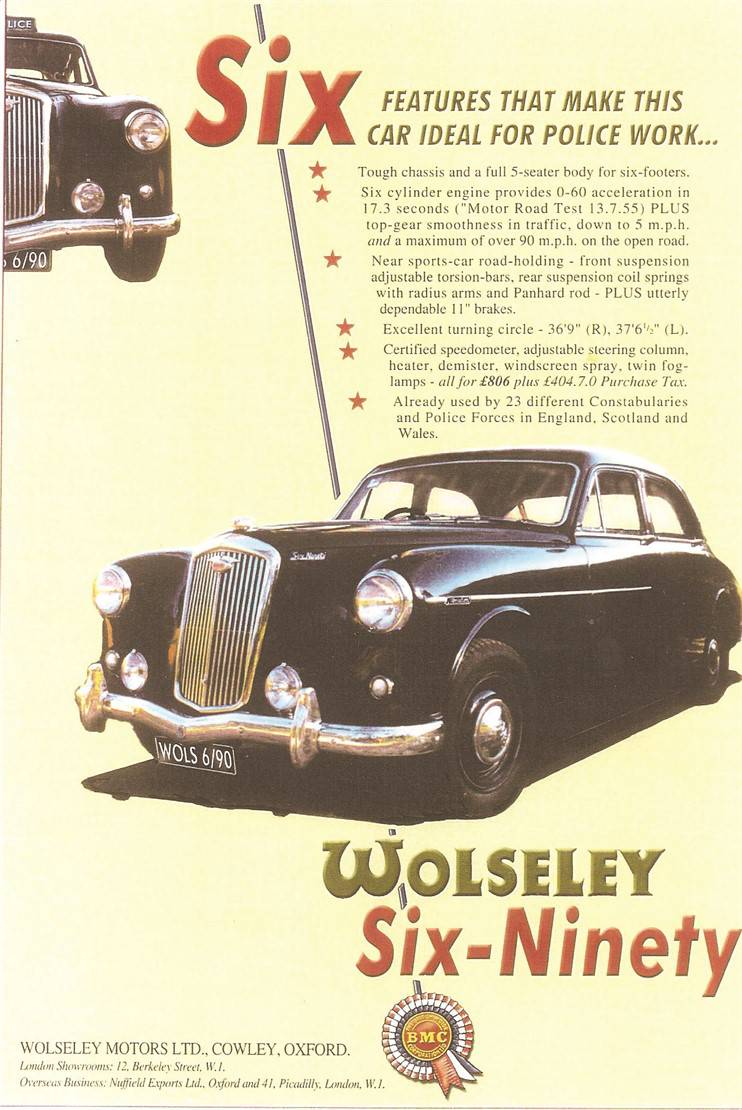