My Lancaster Insurance Hyundai Coupe headed for Mallory Park for rounds 7 and 8 of the Cup, our mid-season meeting, and the sun was shining! We were without a win so far this season and there’s been a fair amount of head scratching at previous meetings as to why we were almost, but not quite, on the pace. Finally we found that the front dampers were in need of a rebuild; the difference the fresh dampers made to the feel of the car on the limit was an amazing transformation.

Twenty Coupes took to the circuit for the 15 minute qualifying session, I instantly felt the cars confidence and I began to find good gap in the traffic to put in a good lap early on. On my sixth lap I achieved my fastest time of 56.66 secs, which was good enough for pole position; 3/10ths of a second quicker that P2 Wayne Rockett.

For the first time this year I started from pole in race one, however my delight was short lived as what was to follow was one of the worst starts I can remember. A hurried start procedure caught me off guard and I got way too much wheel spin off the line and I saw my initial lead soon turn into third place. This is the position I finished in but on a more positive note I did remain a threat to Kite and Rockett throughout and took the fastest lap of the race.

In race two I started on the second row, third on the grid, and knowing I had the pace, I had some work to do. Determined to not fluff this start up I was able to take advantage of a missed gear by pole sitter Steve Kite and squeezed past him off the line through the narrowest of gaps to take second. Straight away I applied the pressure on the leader, Wayne Rockett, until he eventually ran wide on the exit of the long Gerrards corner and I was able to out drag him down the back straight. Steve Kite was also able to follow me through. For the next eight laps, I maintained a good one second gap which I felt was safe. Then my cars’ dynamics changed giving me some serious oversteer to deal with. With some “enjoyable to watch slides” my safe gap reduced to just tenths but after six more laps of this I managed to bring the Lancaster Insurance Coupe home for its first win in 2018!

Here’s the long shot, my Coupe Cup crown defence has had a rough start and to retain the title and win the series, I would have to win every one of the last six races! But now I’ve got the tools to do it.

I’d at least like to make them sweat by taking a couple of wins at rounds 9 and 10 at Rockingham on Saturday 4th August.....not to be missed.

As always I’d like to thank Lancaster Insurance, Reis Motorsport Insurance and the MG Owners Club for all of their support. 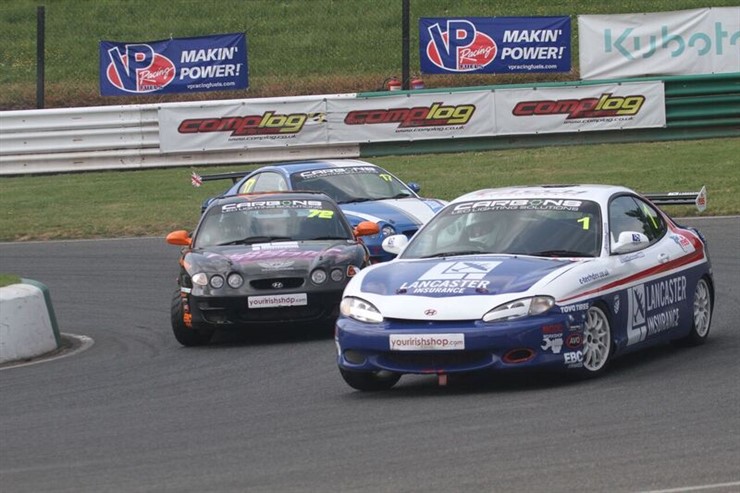