THE OLDEST OFFICIALLY IMPORTED DATSUN IN THE UK

Mark Ashbridge is the owner of one of the most historically important foreign-built cars in the UK. It is not a vehicle that can claim dramatic 0-60 figure or a thrilling top speed, and nor would it claim to be radical in form or content. In appearance it is a neatly proportioned RWD 1-litre saloon and if you did not read the badging, you might have considered that it bore a passing resemblance to a scaled-down Fiat 124. However, his Datsun B10 1000 “Sunny” is one of the original batch of press cars that arrived in the UK some fifty years ago – and is the oldest surviving officially imported Nissan car in the country. In Mark’s words:

As far as can be ascertained, six cars (the full range) were imported in June 1968 and given consecutive registration numbers, OKJ 210F to OKJ 215F; they are therefore the only Datsuns ever issued with “F” registrations. They were then used for advertising and lent to the motoring. Not only is mine the only one left from that batch of press cars it's also the only example of a B10 saloon left in the UK although there are also two surviving B10 estates.

The B10 was launched in 1966, the same year as its deadly rival the Toyota Corolla. It was marketed abroad as the 1000 but in its homeland, it was branded the Sunny, following a nationwide competition to choose its name.  Datsuns made their formal debut in this country in October 1968 and early in the following year Motor magazine tested the Ashbridge 1000. They described it as a “Lavish Lightweight’ and at a price of £766 0s 10d the B10 would have competed at the lower end of the BLMC 1100/Ford Escort/Vauxhall Viva HB class. It would have also appealed to those motorists who wanted a compact four-door saloon rather than a Mini or a Hillman Imp, even if that meant ‘buying a foreign car’. After all, what would the neighbours think? In the event ‘the 1000 was only on sale for about 18 months and Datsun sales were slow to start with, I think only about 900 were sold here’.

The first Japanese car to be marketed in this country was the Daihatsu Compagno in 1965 and three years later the Datsun brand would have been largely unknown. Mark notes that ‘I have the green log book and it's obvious Surrey County Council had no idea what the cars were. The owner is down as Nissen-Datsun Concessionaires with Nissen spelled as per the hut!’  The first British examples were sold by Octav Botnar, a Shoreham-based NSU importer, and after the German marque’s parent company VW-Audi moved operations from Sussex he founded Datsun UK Ltd. The B10 was replaced by the B110 1200 in 1970 and in that same year Mark’s 1000 took up residence at the Surrey dealer AF Tann who were:

One of the first Datsun franchises and very loyal to the marque. The car was used as Mrs. Tann's runabout for about 5 years I believe. I think Rob Tann realised such an early car was important and decided to keep it in the showroom as a curiosity.

In 2000 the B10 was acquired by the famed marque expert Ed Rattley and Mark bought his Datsun five years later. ‘It's had a respray, but it is otherwise original and in very good condition. I've rebuilt the engine and done a lot of work to the suspension and all the other mechanical side’. Regarding the future, ‘The plan is to strip it quite soon and restore it to mint condition although I've been delaying that because it is still extremely good. I need to catch it before some of the areas of bodywork deteriorate further’.

Above all, the 1000 is proof that automotive history does not have to be made by cars that are flamboyant, technically innovative or even especially fast. The original Sunny would never claim to possess any of these attributes (although it is undoubtedly charming) but for an idea of its legacy to British motoring, just take a look at the traffic in any street. Virtually every Nissan you will encounter will owe its sale to the legacy of this innocuous small saloon…

With Thanks To: Mark Ashbridge 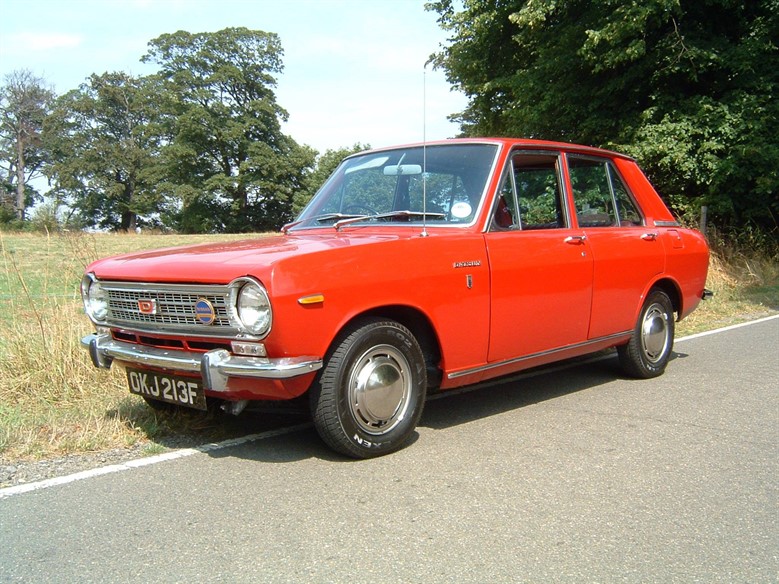