DO YOU REMEMBER THE FORD CONSUL CLASSIC 315?

There are two ways of regarding the Ford Consul Classic 315. The first is that it is the British equivalent of US suburban family transport - the sort of car that would appear in one of those early 1960s Technicolor Disney comedies where a Fedora-wearing dad really would say ‘Hi honey, I’m home!’. But across the Atlantic, those looks are as quintessentially late period Ted as the music of Heinz Burt, Jet Harris or Johnny Kidd & The Pirates. Of course, the average teenager could not have afforded a new Consul Classic as Ford intended it to be ‘suitable for the golf club car park’ but its lines are still redolent of leather jackets, winkle-pickers and nights at the Ace Café on the North Circular. I had the pleasure of writing about the Ford Consul Capri last year but the saloons are equally as charismatic.

Work had commenced on the project in 1956 and resulting the Consul Classic made its bow in spring of 1961 although Ford had originally planned for a launch in the summer of the previous year. However, the vast commercial success of the Anglia 105E meant that the larger model’s introduction had to be delayed. For anyone thinking of trading in their Prefect 107E, a brave new world awaited one of “Breezeway” reverse slope rear screens and an appearance that was the precise opposite of subtle. Colin Neale’s coachwork, a fusion of 1958 Lincoln and the 1960 Galaxie, certainly meant that your Consul Classic would stand out in the car park -  and in comparison with its rivals.

In fact, the Ford’s main competitors, the Vauxhall Victor FB and the Singer Vogue, also made their bow in 1961. The latter conveyed a more muted form of Americana with its vestigial fins and wraparound rear screen while the Luton offering was good-looking but almost deliberately low-key in contrast with its F-Type predecessor. On paper the Austin A60 Cambridge/Morris Oxford Series VI were also potential rivals but their image was far more conservative – more pipe and tweed than sunglasses and Laurence Harvey-style pompadours. To quote Ford’s publicity, this was a family car that ‘Set the Style’.

On a more practical level, the Classic offered a vast boot, front disc brakes and four-speed transmission with your choice of floor or steering column lever. The 315 was available in two or four-door guise and in standard or De Luxe trim forms, the latter offering windscreen washers, a cigarette lighter and two-speed wipers for £801 10s 10d – although a heater was still an optional extra. The advertisements also boasted of ‘Motorway pace’ and the Consul Classic certainly looked the part with its quad headlamps, which were a first for a British Ford.

In reality the 1,340cc engine was not exactly renowned for its blistering performance and in August 1962 the 315 was offered with the 1.5 litre “Kent” engine and an all-synchromesh gearbox. ‘The newest Classic looks set for even bigger sales than ever’ thought Autocar but 1962 was also to be the year of the Consul Cortina, which was devised to bridge the gap between the Anglia and the 315. In the event it robbed sales from the older model, especially when the 1,498cc Super version was introduced in January of the following year.

The Consul Classic was replaced by the Consul Corsair in September 1963, with the Capri ceasing production in 1964. It was still a handsome motor-car but its appearance was almost automatically dated from the moment The Beatles’ Please Please Me album began appearing in record shops. But 55 years later, the sight of a Consul Classic in “Caribbean Turquoise” or “Imperial Maroon” is now as utterly hip as any disc by Vince Taylor and The Playboys or Billy Fury – and that is pretty hip indeed. 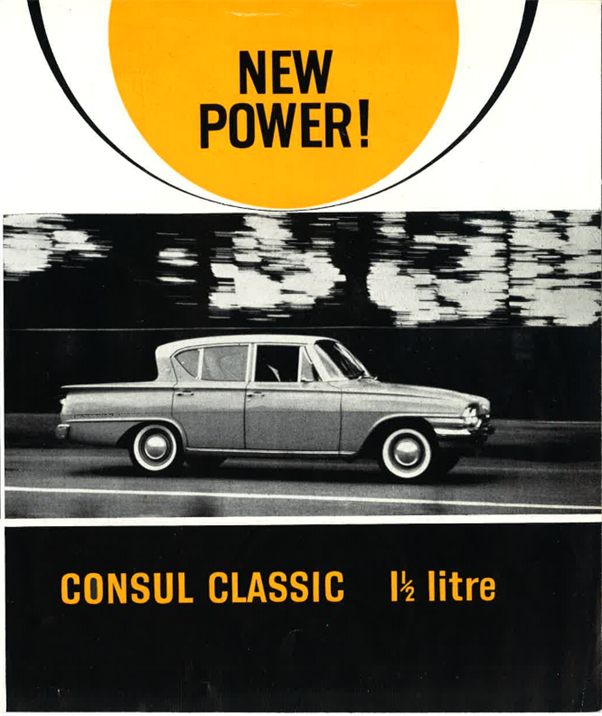