If you need a low-key and discreet form of transport, a Checker Aerobus is probably not the ideal choice. For starters, it is over 22 feet long, has eight side doors and seating for 12 occupants on four rows of bench seats. Power steering and power brakes were very essential standard fittings on a vehicle weighing more than 5,000lbs. Until 1969 Checker also offered a six-door nine-seater version but if you were going to make an impression, then why not go all out and buy a vehicle that is still a record-holder for the title of the ‘longest mass-production passenger car’.

The Aerobus was introduced in 1962 at a time when the average American – as opposed to Don Draper style Madison Avenue types - was starting to experience the joys of aeroplane travel. The Checker was the ideal vehicle to greet them at the airport and transport them to their hotel – it was far cheaper than a stretched Cadillac or Lincoln but less utilitarian than a mini bus but could still accommodate 40 cu ft. of luggage. As Checker’s marketing department pointed out to the hotel owners and managers of the USA – ‘you give your guests first-class accommodations during their stay. So why give them anything less on their way to your hotel or motel? Greet them with a Checker Aerobus Limousine!’.

Although the sales copy also proudly stated, ‘It’s a limousine!’ (as well as ‘It’s a station wagon!’ and ‘a long long family car!’) the Aerobus never had any pretensions to be a US alternative to a Mercedes-Benz 600. It was based on the Checker Marathon Station Wagon, a vehicle that prided itself on its sensible nature, and so the 12-seater version featured ‘highest quality vinyl’ that was ‘used unsparingly throughout the handsomely designed interior’. The brochure also made much of the ‘heavy duty clutch’; and ‘heavy duty shock absorbers’; this was certainly not a frivolous motor car.

The first examples of the Aerobus used a 5.2 litre Chrysler V8 engine but in 1965 this was succeeded by a 5.4 litre Chevrolet unit and, in 1969, a 5.7 litre plant. Checker claimed that it ‘handles with ease of a passenger car’ but the Aerobus was obviously never going to be a common sight in the UK; imagine parking in a typical high street in an estate car with a 56 ½ feet turning circle. Autocar clearly regarded it a somewhat of a novelty item – ‘that long-drawn-out caricature of an estate car the Checker Aerobus’ although they were surprised that it was ‘much less of a handful to drive than expected. But this is essentially a commercial vehicle, for hotel-airport commuting or long-distance sightseeing’. By contrast, a 1969 Road and Track evaluation observed that the Aerobus was ‘the only 12-passenger vehicle in the country that you can buy off your dealer's showroom ﬂoor without the tedious delay (and expense) of a special order’.

That report neatly summarised the appeal of the ultimate in US wagons. The original Aerobus ceased production in 1974 but between 1975 and 1977 the factory in Kalamazoo made a handful of versions based on the Marathon saloon. Anyone who wishes to appreciate the unassuming grandeur of airport transport from the days before the ‘people carrier’ should pay a visit to the Isle of Man Motor Museum - http://www.isleofmanmotormuseum.com. Their unforgettable exhibit was first used as a school bus by the Greenbrier Military School of West Virginia, was imported from the USA in 2007 – and makes you regret that the multi-door station wagon never really caught on in this country.

Becca Scott and everyone at the Isle of Man Motor Museum. 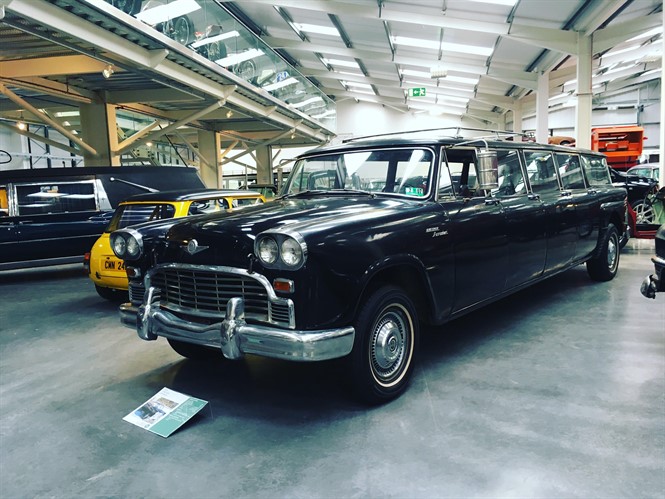