You never forget the sight of the Bond Bug, one of the very few British three-wheelers to be aimed at the youth market. The brochures claimed that it was ‘that very rare thing – not just a new car but a completely new idea’ and that it was a ‘funabout’ as opposed to a ‘runabout’. The Bug was launched in 1970, where it caused as much a sensation as the new Ford Cortina Mk. III, Range Rover and Triumph Stag.

Naturally, all Kings Road types opted for the top of the range 700ES with its low-profile tyres, ‘deeply quilted cockpit lining’ and ‘high compression engine’ all for £628 19s 2d; many owners spent an additional £12 10s on aluminium die-cast wheels. Motor tested the flagship version in June 1970, and they noted ‘flat-out over a one-way quarter mile our Bug did over 80 mph and felt very safe and stable into the bargain’. They concluded that they were ‘sorry’ to have to return their demonstrator to the factory and that ‘bold steps forward deserve to succeed’.

Power for the Bug was via the familiar Reliant light-alloy unit but the GRP coachwork was a world apart from the Regal; I always envisage the archetypal owner of the latter to resemble Arkwright of “John Smith’s Bitter” fame - https://www.youtube.com/watch?v=l6s_9IcI_tQ . By contrast, the Bond was aimed at the young gentleman or lady about town, especially if they regarded tangerine as the ‘happening’ colour for the ‘in-crowd’.

The Bug was initially intended to be sold as the “Reliant Rascal” and Tom Karen devised it in 1968 as a very British interpretation of the US beach-buggy concept; to save on costs, it would use several components of the Regal. In the following year, the Tamworth company acquired the rival Bond company and here we are indebted to the memories of Mr. Barrie Willis, a former chief buyer of Jaguar. He joined the Reliant Company in 1972, eventually becoming its director of product development and deputy MD.

In his forthcoming autobiography, 45+ Years Without John DeLorean Barrie recalls that Bond was in some difficulty as sales of their Imp-engine 875 were now ‘mediocre’. Reliant’s MD Ray Wiggin ‘decided to rename Karen’s creation as the Bond Bug, assemble it at the Preston plant and retail it through Bond franchised dealers’. One famous owner was Roy Orbison, who collected three-wheelers, and he paid a visit to the factory ‘to take delivery of his new Robin as a personal export’. However, as the 1970s progressed, one challenge was that:

Despite its attractive appeal to the target market of younger motorcyclists, the expensive-to-produce Bug lacked any component sharing other than engine, gearbox and axle of the Robin which had replaced the Regal and, as a result was expensive to make and overpriced.

The Bug ceased production in 1974, although the firm’s chief engineer John Crosthwaite had devised a four-wheel version. Reliant ultimately dismissed this idea – Barrie remarks that Crosthwaite had made ‘no attempt to “sell” the idea to his peers’ – but the prototype could well have formed the basis of a Midget/Spitfire alternative.

The legacy of the Bug continues to this day, including a crucial role in the original Star Wars film ‘thanks to Tom Karen's Ogle Design winning the contract to build the vehicle for the movie’.  It must be said that the Bond looks far more dynamic than any “Landspeeder X-34”. As for driving the Bug, Barrie observes that ‘like two-wheelers, they need to be given the respect they deserve’. Ron Biggin, the Membership Secretary of the Bug Club, and owner of two examples of the 700ES, remarks that they are ‘Huge fun to drive – the sensation of speed is phenomenal!’.

And it is almost guaranteed that any surviving model will inevitably attract the attention due to the car so accurately described by Bond as ‘There never has been anything like it before’. Absolutely.

Barrie Willis - 45+ Years Without John DeLorean is due to be published in spring of 2019. 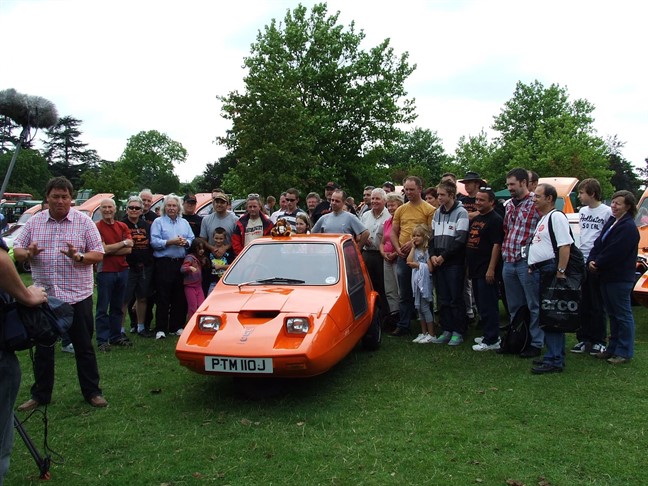