When Richard Snowdon was a teenager he craved a new Ford Capri Injection but after leaving school he put aside such dreams together with Depeche Mode records. However, 12 years ago ‘I was collecting my daughter from a party and the host invited me to take a look at the classic car in his garage. On seeing those four headlamps, I fell in love with the Capri all over again and asked the chap “are you selling?”’.

As any enthusiast will tell you, there is no such car as an ‘ordinary Capri’ but Richard’s example is none other than the highly coveted 280 “Brooklands”. ‘Mine was built in 1986 and registered in 1987; it is car number 993 out of a production run of 1,038’. In 1981 the Injection revitalised the Mk. III’s image and in late 1984 it gained a limited slip differential rear axle and even more stylish alloy wheels as the “Injection Special”.

By the mid-1980s Ford wished to mark the demise of “The Car You’ve Always Promised Yourself” and their original plan was to build a limited run of 500 modified Injection Specials and badge them accordingly. The eventual car was, of course, the 280, which debuted in 1986 and was instantly recognisable via its hide-trimmed interior and its Brooklands Green paint finish.

In terms of condition, Richard’s car was ‘as she looks now’ but since 2006 she has received a considerable amount of work. The leather has been re-Connolised’ and the Capri received a ‘bare metal respray from Cosmetic Auto Care in Northampton’ and ‘five-day detail by Matt Rowe of Obsidian Detailing to get the paintwork absolutely bob on’. Under the bonnet the 280 was suffering from ‘serious valve seat recession issues’ and such issues were rectified by Ric Wood at Ricwood Motorsport. ‘The top end was re-built, and the engine was tweaked; the power is now 175bhp’.

Whenever the 280 is taken for a spin around Macclesfield it inevitably attracts a great deal of attention, especially in service stations and car parks. ‘It happens about 50 times a day. Some people call my Capri “a Laser” but I never correct them; I just quietly smile’. Richard has also driven the Brooklands through ‘the “Millionaires’ Triangle” in Cheshire and sometimes the owner of a Bentley will lower his electric window for a chat. I frantically crank the winder to hear him say “that’s a proper car”.

The 280 remains one of the finest examples of how to conclude a long-running model on a high note and it is very apparent how much Richard enjoys owning such a magnificent Ford. ‘The sound of that V6 burble is unmistakable’. The Snowdon Capri is now part of the family and it is a regular star of the Lancaster Insurance Classic Motor Show and it can be seen at the NEC this November – ‘I am finding that many younger visitors respond to it – and quite a few know more about the Brooklands than older drivers!’. And as for Richard’s choice of music when on the move – ‘well, I do have some ABBA cassettes…’ 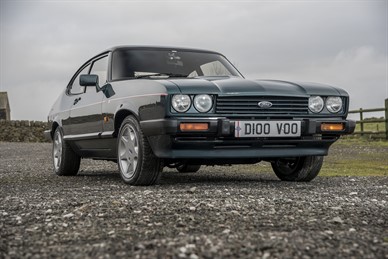