One of the most famous stories about the 1952 London Motor Show is that the new Healey 100 was parked behind a post as Donald Healey was so dubious about the appearance of the radiator grille.

He need not have worried, as it caused a sensation, with blazer-wearing enthusiasts raving about the Gerry Coker-styled coachwork and the prospect of motoring at over 100 mph.

Leonard Lord, the Chairman of Austin, was so taken with the light blue sports car that he met with Healey and by the following day, the 100 bore a new name - “Austin-Healey”.

Donald Healey envisaged his latest sports car as filling a niche between the MG TD and the Jaguar XK140, especially in the USA. 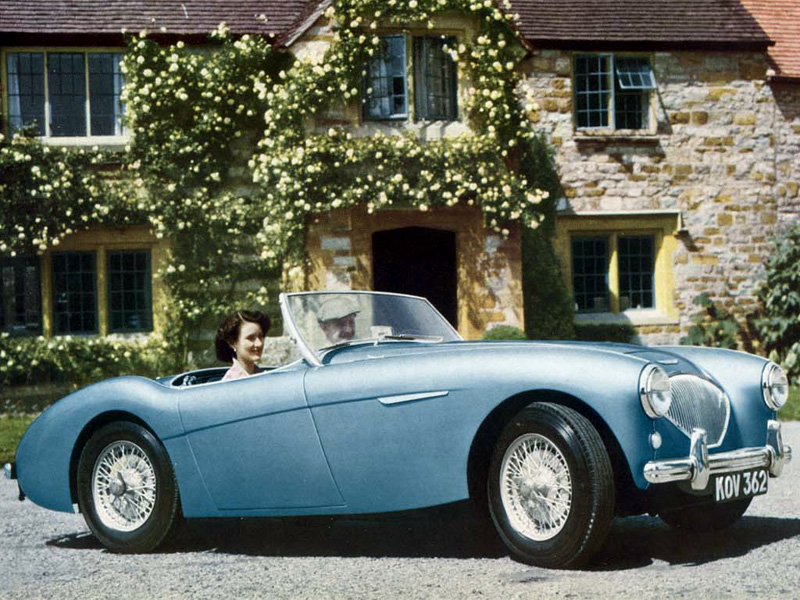 In 1951 he commenced negotiations with Longbridge as the production of the Riley motor, previously favoured by the Healey Motor Company, was shortly due to cease. The result was the 100 employed the 2,660cc four-cylinder engine from the Austin A90 Atlantic.

The debut of the Healey caused a genuine surprise to many show-goers, and Motor Sport noted: New too is the Healey Hundred, another very compact sports car, with an Austin A90 engine and Laycock de Normanville overdrive.

It was not altogether a secret to us, because a Dutch motor-paper had the story some weeks before the Show opened, but the official catalogue has nothing about it.

Indeed, there were only two 100s in existence at that time; one at the London Show and one undertaking a speed test at Jabbeke. Meanwhile, The Motor regarded the Austin-Healey as ‘one of the most attractive cars exhibited at Earls Court’.

Early plans were to make 20 cars per week, but with Austin’s involvement this rose to a projected 100 – 120 units. Construction of the bodywork was subcontracted to Jensen and a small number of demonstrator models, all LHD, were built at the Healey factory in Warwick before full production commenced in mid-1953.

A new Austin-Healey 100 “BN1” cost £1,063, and John Bolster of Autosport thought the 100 ‘shatters all previous concepts of value for money in this field.

Across the Atlantic, the 100 was declared “International Car of The Show” at the 1953 New York Motor Show, and in September of that year, Donald Healey entered them in the International Record Trials at Bonneville Salt Flats. His son Geoffrey wrote in his memoirs The Healey Story how:

Two production “100” vehicles had been selected at random from dealer’s showrooms in California by officials of the American Automobile Association who kept them under tight control on the 1000 mile drive to Wendover, Utah, just outside of Bonneville.

Two servicemen drove the cars all the way with the AAA officials beside them. We were allowed to select one of these cars for the attack on the American National Stockcar Records, but they only allowed us to work on the car under the eagle eyes of the AAA observers. Only factory listed parts and spares could be used.

Healey Snr averaged 104 miles per hour for 30 hours in a “stock” 100, and subsequent advertainments made justifiable references to ‘the world’s fastest production car’.

By the time the BN2 succeeded the BN1 in late 1955, the Austin-Healey marque was known around the world.

The launch of the 100 could not have been better timed. In the UK post-war restrictions and waiting lists for new cars were starting to relax while Lord craved sales in North America.

The A90 Atlantic had never quite appealed to affluent motorists in Connecticut and New Hampshire but an Austin-Healey was perfect for the up-and-coming corporate lawyer.

Give your classic the protection it deserves and get a quote for your Austin today.