Put simply, the British Motor Corporation’s ADO16 range is one of the most important family of cars in the history of the UK’s automotive industry.

When the original Morris 1100 debuted on 15th August 1962, it was not just the Mini-formula writ large; it introduced thousands of drivers to the concepts of FWD and Italian-styling all at a price within reach of the average suburbanite.

The resulting popularity of the ADO16 – it went on to become the best-selling car in the UK – should not overshadow the fact that it represented a major gamble on the part of BMC.

The Mini’s early sales were distinctly below expectations, and there was no guarantee that prospective Morris 1100 buyers would take to the notion of front-wheel drive, let alone transversion engines and Hydrolastic suspension. 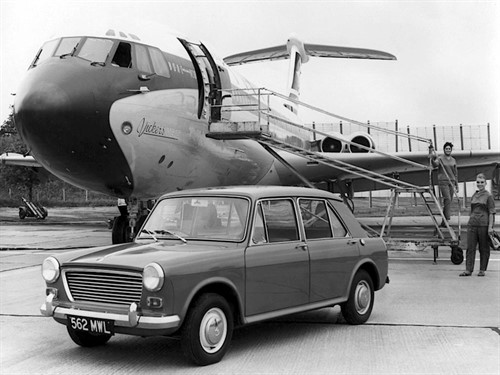 Asides from the Mini, a FWD small car meant buying ‘one of those foreign cars’ – the Citroen Ami 6, the DKW 1000 or the Renault R4.

Alternatively, you might have considered the rear-engine likes of the VW Beetle or the Renault Dauphine.

When Alec Issigonis commenced work on the future Morris 1100, Project XC9002 resembled an enlarged Mini but Leonard Lord, the Chairman of BMC, was highly aware that prospective buyers would demand more in the way of styling.

The A40 of 1958 had already demonstrated that the sort of motorist who delighted in wearing an Italian-cut suit (and wearing sunglasses in the high street espresso bar) favourably responded to a small car with coachwork by Pininfarina.

The familiar ADO16 lines were more or less complete as early as July 1959 and Issigonis was to subsequently remark of his own efforts ‘I couldn’t get it right’.

His design philosophy was not to create ‘fashion accessories or status symbols, but motorcars — things that travel as efficiently as possible from A to B.

A car should take its shape from the engineering that goes into it’. He was also against fitting the ADO16 with front disc brakes, as he regarded ‘fashionable; the thing to have.

I was not particularly in favour of them, but the management suggested our having disc brakes, even though it was a more expensive thing to do’.

Early plans to use the familiar 948cc A-series engine in the ADO16 were soon abandoned in favour of an enlarged 1,098cc unit. At one point, the Morris was to be powered by Lancia-inspired 18-degree V4 unit, but these plans were soon abandoned.

Another major talking point was the Hyrolastic suspension, a “first” for a BMC production car. The four-speed transmission lacked synchromesh on first as Issigonis disliked it – ‘I find that it is difficult to get into gear with it’.

When the 1100 finally made its bow, it bore Morris badging to appease those Nuffield Group dealers who complained that their Austin counterparts had access to a more elaborate line-up of models.

Two-door versions were restricted to “Export only”, although one surprising detail was that all models were fitted with tip-front seats. Visitors to their friendly local Morris dealer were impressed by crisp styling and the remarkably spacious cabin.

A few elements were familiar – the ‘quick-glance’ instruments were from the A40 – but the 1100 did live up to the brochure’s claims of ‘fresh, progressive and exciting thinking’.

The Motor predicted that if it did not sell in phenomenal numbers ‘a lot of people will be eating their hats’ and Motor Sport, although taking the opportunity to bemoan the build quality of the early Minis was equally impressed.

Their scribe thought the new Morris should not: fail to attain glorious sales. The design is one of true genius on the part of the talented Alec/ Alex partners and that this small but spacious, front-drive Hydroelastically suspended car can be sold for under £700 even in its deluxe 4-door saloon form will prove a big factor in rendering it a best-seller and slaughterer of rival small cars, both British and Continental.

As for Autocar, they stated ‘The staff of this journal have never been so unanimously enthusiastic about the overall qualities of a car’. The 1100 was ‘truly capable of challenging the currently popular European small cars which it is destined to meet in world markets.

Meanwhile, the type of driver who donned leather gloves for a trip to Victor Value to stock up on Wonderloaf noticed that the Morris featured the remote-control gearchange and cylinder head as the Mini Cooper.

By October 1962, the flat-hat and sheepskin car coat brigade were offered the MG 1100 with its twin carburettors, and in 1963 the range was joined by the Austin and the Vanden Plas Princess.

The introduction of the Riley Kestrel and Wolseley 1100 in 1965 marked the peak of the ADO16’s badge-engineering – one car sold under six marque names.

The final British-built ADO16 left the factory in 1974 – the South African Austin Apache continued until 1977 – by which time it was part of the fabric of national life.

But twelve years earlier, that original Morris 1100 was as much a harbinger of “The Sixties” as an odd, almost skiffle-like record released by a Liverpool “beat combo” in October 1962. And both Love Me Do, and the first ADO16s were the early signs of a social revolution.

Give your classic the protection it deserves and get a quote for your Morris today.