DO YOU REMEMBER – THE LEA-FRANCIS LYNX?

The 1960 Earls Court Motor Show was the venue for the re-appearance of one of Britain’s most famous car marques - https://www.youtube.com/watch?v=mWap5furn5c As Motor Sport put it:

This famous concern, well known for its vintage sports cars, makes a welcome return to motor manufacturing with a roadster of distinctive styling to say the least.

At the time of going to press few details are available, but the car will be powered by a Ford Zephyr engine fitted with three S.U. carburettors mated too four-speed gearbox.

And no-one could ignore the Lynx. Some said that it resembled a B-film spaceship, while others hailed its bold qualities. And many were simply mesmerised by the mauve paint finish and gold-plated fittings. 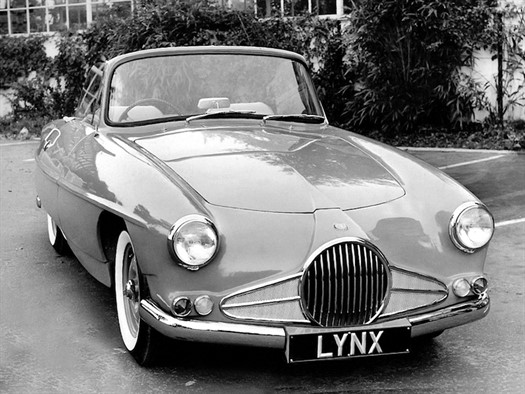 The origins of Lea Francis date from 1895 and after 1954 the concern focused on engineering rather than cars. However, in March 1960, keen motorists were pleased to read in Autocar that:

Mr. K. B. Benfield, newly appointed chairman and joint managing director of Lea-Francis Cars, Ltd., stated last week that there was every likelihood of Lea-Francis returning to the field of car manufacture.

It would not be for "two or three years," because a period of concentration on Ministry and subcontract work was necessary to stabilise the company's financial position.

By that time, work had already commenced on the Lynx.  BMC turned down the opportunity to supply the firm with the Austin-Healey’s 3-litre C-series engine and so Lea Francis approached Dagenham.

The Lynx was to be based on a tubular steel frame and boast Triumph TR3 transmission, disc brakes and rack and pinion steering.

The coachwork was devised by their PR manager Arthur Keene, who doubled as a cartoonist and comedian - although it seems that the Lynx’s appearance was imposed upon him by senior management.

The Motor observed, with remarkable restraint, that ‘Wrap-around bumpers, finned rear-light clusters, a tall, near-vertical windscreen and knock-on wheels’ were ‘all evident’ in the side view.

The fact that the Lynx was ready in time for the London Motor Show remains a testament to the dedication of the Lea Francis team.

Unfortunately, no orders were placed during the event, and a Motor Sport report did not help its commercial chances -  ‘The resurrected Lea-Francis gives you a 102-b.h.p. version of the Ford Zephyr engine in the "Leaf Lynx" but you must judge for yourselves whether you would care to be seen in one, alive or dead’.

After the show, Lea Francis carried out various modifications – the side panels were made less bulbous, the fins altered, and the windscreen lowered – but it was to no avail.

Only three examples were ever made, and fortunately, each of them survives to this day. And nearly five decades after their memorable introduction, who could resist the Lynx’s genuine individualism.