DO YOU REMEMBER THE FORD ZODIAC MK. III?

There is something undeniably imposing about a Ford Zodiac Mk. III. It is the sort of car that demands a camel-haired overcoat and a trilby hat, one for trips to Goodwood or at least a journey in style to the cash and carry.

Back in April 1962, there was excited talk of how, at long last, two-speed electric wipers had replaced the vacuum-powered set-up of the Mk. III’s predecessor. There was also a four-speed all-synchromesh steering column gearchange in place of the Mk. II’s three-speed box although some drivers regarded this as a mixed blessing.

But the main selling point of the Zodiac Mk. III, above even the specification that included a heater, clock and cigarette lighter as standard, was the styling - based on a 1960 Pietro Frua concept and refined by Roy Brown.

The rival Vauxhall Cresta PB, which debuted in October 1962, may have adopted a low-key look but the Zodiac’s appearance has been described as “Late Period Teddy Boy”. Of course, few Gene Vincent clones could have afforded such a car, as the Mk. III was “business-class transport” for the motorway age. 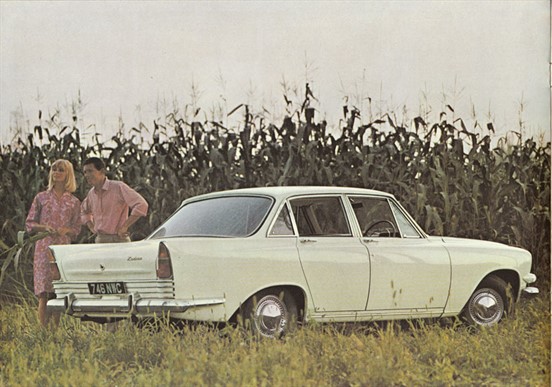 The Zodiac’s 2,553cc engine boasted a useful 11 bhp increase over the Zephyr-Six, making it the first production Dagenham car to reach 100 mph while the quad headlamps, the rear doors and the six windows helped to differentiate it from the cheaper Mk further. IIIs.
Such detailing also gave the Zodiac a decidedly mid-Atlantic air although the cabin was surprisingly cramped.

Motor Sport complained that when the front bench was fully adjusted ‘entry to the rear compartment is seriously impaired and knee and foot room ridiculously restricted’ and that ‘ The Zodiac's luggage boot is enormous—at the expense of turning what should be a spacious six-seater into a comfortable 3-seater!’

However, at £1,070 15s 3d, the Zodiac represented excellent value for money. The scribe did conclude that the Ford Zodiac III will appeal to those who like a big lazy-running, softly-sprung car.

Autocar thought "There is every indication that the new Zodiac will attract an even wider public than its predecessor, that it will please them more and serve them even more".

Dagenham’s press office ensured a high-profile role for their new flagship in the rather good medical drama 80,000 Suspects and as transport for a young Michael Caine in The Ipcress File - https://www.youtube.com/watch?v=zoCV7vahHjY.

Those motorists who required more space could opt for the estate car conversion by E.D Abbott Ltd. while for the ambitious/the social climber, the major news came in 1965 with the new “Executive Zodiac”.

Autocar many have claimed it was just ‘the Zodiac with all the extras’, but Ford promised the Executive was ‘specially prepared and appointed to meet the needs of Britain’s top men’.

The Mk. IV Zephyr/Zodiac replaced the Mk. III range in early 1966, by which time those canted tailfins looked about as contemporary as Billy Fury appearing at a concert by The Kinks. But that ’62 coachwork retained a unique charm – and you really can imagine a 40-year-old Arthur Daley delighting in arriving at the Winchester Club in a C-registered Executive Zodiac.

Give your classic the protection it deserves and get a quote for your Ford today.