Decent weather is final upon us (at least it was when I wrote those words!) and, as the cinema adverts used to claim back in the 1960s, now is the time for ice cream. Highly decorated and still a part of the motoring landscape, the ice cream van is a very welcome sight at the end of a long summer’s day so here are six classic examples.

As with many of my generation, I first encountered the Austin K2/Y via re-screenings of Ice Cold in Alex on television. It is a film that showcases the talents of John Mills and Anthony Quayle at their considerable best and one of the principal characters is the battered but indomitable ambulance, which was one of the key British military vehicles of the Second World War.

This year marks a double celebration for Saab, not only is it the 40th anniversary of the Turbo, it is also the 50th birthday of the 99.

A Half Dozen 1970s Hot Hatchbacks

The VW Golf GTi Mk. I may have been one of the most notable ‘hot hatchbacks’ of the 1970s but it was neither the only or even the first of the breed. The half-dozen cars described below are my own selection – all front wheel drive, all with a third or fifth rear door and all of them highly entertaining.

Adverts of the Week - Wolseley

‘What a magnificent car’, the three business-like gentlemen seem to be saying. ‘We like the cut of the owner’s jib for anyone who appreciates the 6/99 is clearly a chap amongst chaps. He obviously deserves a seat on the Board of Directors and 5,000 guineas per year’.

The top 10 beach cars.. or if you prefer, ten cars that help to make a successful vacation. In chronological order, we have:

Gene Hunt: what would he have driven in the 1990s?

If TV super-cop Gene Hunt had operated in the 1990s, which car would have replaced the 1980s Audi Quattro?

We’re thrilled to announce the show’s highest turnout last weekend, with more than 14,000 people attending the show, up 40% on last year! Over the weekend, 2,100 classic, motorsport and supercars were displayed over the 36 acres, with 1,720 classic and sports cars including those from members of 31 car clubs.

Club of the Month is always a very difficult feature for us to decide as there are always so many worthy recipients! This month’s was unanimously decided and has been awarded to ‘Yeovil Car Club’, a club we met at the Lancaster Insurance Classic and Supercar Show at Sherborne Castle, which took place last weekend.

The early ‘whale tail’ version of the Sierra Cosworth featured as our ‘Car of the Month’ last year but it was the 4-door saloon version of this car, with its less extrovert styling, which became much more accessible to those looking for a fast Ford. Over the 4 years that the ‘Cossie’ was produced some 25,000 vehicles were snapped up.

The announcement on July 16th of the Thirteenth Doctor sent me back to the distant past, one long before Christopher Eccleston – a time of disused quarries, entertaining rubber-costumed monsters and when masterminds who craved to rule the universe sported pointed beards to highlight their malign natures. And, as it turned out, quite a variety of cars…

This weekend, a team from Lancaster Insurance will be making their way to the picturesque Sherborne Castle for the Lancaster Insurance Classic & Supercar Show where over 2,000 vehicles will be on display including American, Custom and Hot Rod cars as well as a range of supercars.

Rockingham Motor Speedway was the setting for our mid-season meet and we set out to get back to our winning ways following the frustrations at Thruxton.

Do You Remember the Reliant Kitten?

Many of us have been nearly bored to death by various jokes concerning that mythical car, the ‘Robin Reliant’. Firstly, it was and is a Reliant Robin - just as you would not refer to a ‘Cortina Ford’ or ‘Chevette Vauxhall – and secondly, the Tamworth company did not lack for ambition with their small cars during the 1970s.

The Hillman Imp – The Car for ‘The Young in Heart’

A confession – I am an unabashed fan of the Hillman Imp family. The early models are, in my not at all boasted view, one of the best looking small cars of their generation with their quasi-Chevrolet Corvair lines.

The Lancaster Insurance Classic and Supercars Show at Sherborne Castle is fast approaching, with gates opening this Saturday at 10am!

Part three of the Legends of Brands Hatch Superprix takes a look at the Guards Trophy – Elva MK7S and below is a review from Ben Mitchell.

Part two of the Legends of Brands Hatch Superprix takes a look at racing action in the Classic F3 – Chevron B34 and below is a review by Max Bartell.

The Legends of Brands Hatch Superprix was a busy weekend as I raced solo in the Classic F3 Championship and with Ben in the Historic Formula Ford Championship and Guards Trophy. We’ll be recapping the jam packed meet in the next few blogs!

“June was a bit manic as we are in the midst of an intense Wheeler Dealer schedule and finding time in-between grinding, rubbing, buying and selling to do anything is difficult.

However, both Ant and I were back in the UK to host the brilliant MGLive at Silverstone. This event gets bigger and better every time and this year’s show was made even more special by the constant sunshine that plonked itself right over the country for those few days.

Whilst back in the UK, we both also had busy schedules. I was up and down the country to my dealerships in Sheffield and Leeds while Ant was presenting a big live show for BBC2, Britain’s Greatest Invention, all good stuff.

However, there was no way I was heading back home without paying a visit to Cross Street Garage in Swindon to catch up with Blokie and the #ClassicRumble Escort XR3i. 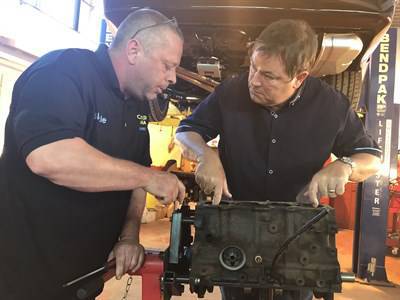 Walking into the garage was like stepping into a parts store, Burton Power have kindly donated all the engine rebuild bits we need, so Blokie has already started to strip down the big ends and decided to re-sleeve the block so the little 1.6 lump will ultimately be new when its back in the car. One of the nice touches added were the wonderful wheel centre caps that are embossed with #TEAMMIKE made by Steve Bonner... love that detail.

I then scooted over to Northampton to check on the progress of the body and without revealing too much, lets just say I’m a very proud man of the work that Cosmetic Autocare have done.

I’m still looking for a roof so if anyone out there has a new one laying around, please get in touch.

I’m back in LA now filming Wheeler Dealers flat out with Ant but we are back to the UK at the end of July for the Silverstone Classic when once again I’ll have another progress report of the Charity Build. 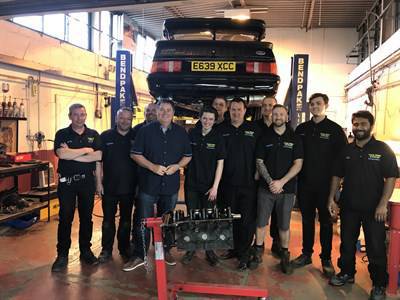 “It’s been a very busy time on the set of Wheeler Dealers, meaning I have had to rely on the volunteers back in the UK to keep the #TeamAnt bespoke build going, and they absolutely have! We have been Face Timing and calling on a daily basis, and the Project Manager from Channel 4's The Love Of Cars (and also my business partner) Stewart Imber has been cracking on full steam ahead!

I came back to the UK for a few days and we spent the first half of the day around the car tidying up a few loose ends and making some key critical decisions. The engine went off to Steve Guglielmi (Guglielmi Motorsport Daventry), a fine chap who was recommended to me by my opponent Mike Brewer! We’ve had numerous discussions about whether to upgrade or not, but for now we are resting on standard specification (with Webbers) as those little MX-5 engines are excellent! I’ve seen numerous pictures of the stripped down engine and I’m excited to receive the finished article back! 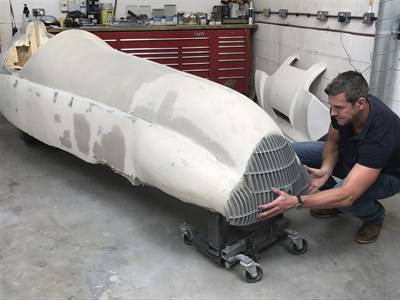 The five speed gearbox has gone to Chris Hughes of Kenilworth based firm 2Spec Transmission and they too have taken the bull by the horns and jumped straight into the rebuild! We’ve even shared numerous emails on whether to upgrade to a LSD. Watch this space....

Back at my workshop the build is now running in tandem. The body is making slow progress, slower than I hoped, but volunteer Matt Lawson has taken ownership alongside my other business partner Chris Hacket. I have every faith that the bodyworker chaps have got this but we do have a deadline. We need to get the buck finished by end of July to stand any chance of moulding her in time to make the actual shell. I feel its going to be a manic end of July.

The rolling chassis has really taken shape and aside from sorting some loose ends with the fitting of brake lines and fuel lines etc, she sits patiently waiting for the return of the engine and gearbox! Once those are fitted I think we would be a couple of days away from a naked car driving around the yard!

I’m back in the UK at the end of July and racing an Austin A35 at the Silverstone Classic. Our car is inspired by the first ever winning F1 car which won that race at Silverstone. Inspiring!

I am still after some help.... I need some more help with the bodywork. If you are ‘world class’ at filler and shaping and are happy being paid in cake and cookies then please contact me! 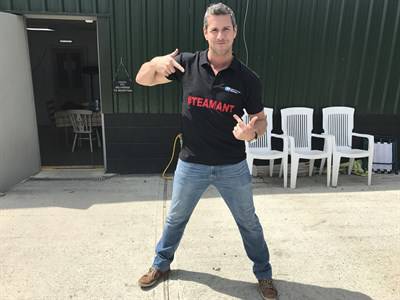 Mike and Ant’s projects will be auctioned at this year’s Lancaster Insurance Classic Motor Show in November, through Silverstone Auctions, with all proceeds going to charity.

The money raised from the sale of Mike’s XR3i will benefit the Marie Crawford Boyd Foundation and Ant’s 1950s inspired Grand Prix racer will be raising funds for Harrison’s Fund.