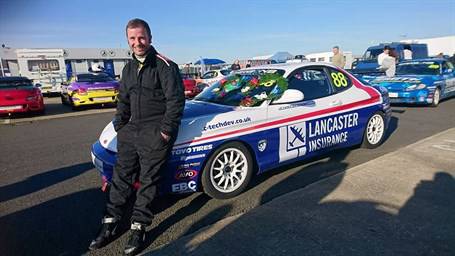 The first two rounds of the Hyundai Coupe Cup were held on the Silverstone National Circuit on the 25/26th March. There was a record number of 18 coupes on the grid, so I’m anticipating this will be a tough and exciting season for all involved!

Over the winter I made every effort to ensure my Lancaster Insurance Coupe would hit the ground running. I freshened up the engine and suspension and with a mighty fine new livery, thanks to MGOC workshop and Exit13, it’s safe to say we achieved our goal. In qualifying I spent a good five laps gently warming up the tyres and brakes whilst finding an open track. I was chuffed to record a lap time worthy of pole position by 0.8 seconds, it's certainly great to see p1 appear on the pit board!

In race one I didn’t plan to go easy on the tyres and brakes as I wanted to get a good start and build a gap from the outset and I fortunately did just that. With my expected quickest rival Will Taylforth, a hungry young ex junior Ginetta driver, starting in 5th after mechanical issues in qualifying, I was able to pull away and maintain a good few seconds lead until the chequered flag to take the win.

I started race two again on pole and applied the same strategy as before but with Taylforth next in me in second spot, there was definitely some added pressure. After another good start, I built a few seconds lead again and I was pleased to see my 2015 rival and series winner Simon Miles having a good battle with Will. This lasted throughout the race and allowed me to keep the lead safe as they were slowing each other up by at least a second per lap. The chequered flag went down and it was  win number two for me, the perfect weekend for the Lancaster Insurance Coupe. 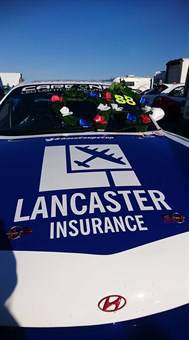 Rounds 3 and 4 are next at Snetterton taking place on 6/7th May. It’s my home circuit (no pressure!) and I feel it provides a bigger challenge for me. I’m continuing to aim high with more wins and with the Cup growing with more drivers/teams expected to join, exciting times are ahead -  stay tuned!