When the Mini collector John Fisher takes his Tweed Grey 1966 Austin Convertible for a spin he often encounters one of the following questions - ‘did you cut the roof off it yourself?’ or ‘why hasn’t it fallen in half?’ To which the answer is always, the work was undertaken by Crayford of Westerham in Kent - and their standards were renowned in the UK and overseas.

Crayford Automotive Design Consultants was founded in 1962 by David McMullan and Jeffrey Smith, two ex-Lambretta employees. As John points out that their very first cars were Mini-based and when the “Sprint” went on sale in June 1963, it attracted considerable attention.

Each car was the result of painstaking work, including the removal of much of the body above the waistline. Steel strips were added beneath the rear seat and along the door sills for extra rigidity.

The windscreen and scuttles were reinforced and John’s Mini features the fixed rear side windows of the later models in place of the detachable side-screens on the earlier versions. The hood was made from ‘tough good-looking Vynide’ with a “Vybak” rear screen.

For £690 you could order a new Mini drophead (complete with a BMC warranty) or despatched your existing car to Westerham; the price in 1964 was £129 10s. In the mid-1960s a Crayford Mini had very few direct rivals.

The Morris Minor Tourer and the Triumph Herald Convertibles occupied a different sector of the market, and the conversion was ideal for the former Midget/Spitfire/Sprite owner who now had family commitments.  In other words, the purchase of a four-seater did not automatically make you a ‘square’.

The brochure boasted of how the Convertible possessed ‘all the merits of the Mini’ combined with a roof that made it ‘as snug as the saloon when closed and a four-seater sports car when opened’.

John points out that it also appealed to affluent young people and the open-topped Mini would make a junior accountant or solicitor as hip and ‘with it’ as Ray Davies. Or at least Simon Dee. And for an example of 1960s sales copy at it is extreme worst, Crayford’s work on the Mini Cooper was billed as ‘the car to “see off” sports cars and to let in “the birds”’. 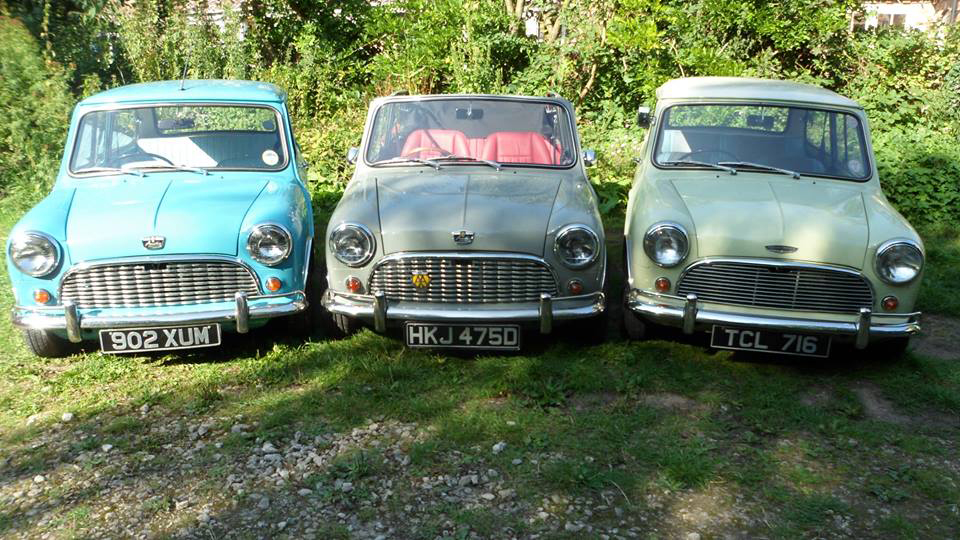 Meanwhile, HKJ 475D was constructed on 6th June 1966 and registered on 19th of July. When it was acquired ‘about two years ago’, the Mini had recently undergone an incredibly extensive restoration process; between 1978 and 2016 it had languished in a very sorry condition.

The many modifications included a 1300GT A-series engine uprated to 1,340cc; there were also front disc brakes, a Maniflow Cooper freeflow manifold and an alternator in place of a dynamo.  The transmission has also been upgraded to an all-synchromesh box, combined with the “magic wand” gear lever, the seats were now trimmed in red leather, and the instrumental binnacle incorporated a tachometer.

Today, John much enjoys driving the Crayford – ‘the standard of workmanship is incredible, especially given how small their operation was’ – and his Austin is one of just 14 Mini Convertibles in existence. Each of the company’s subsequent products, from the “Heinz 57” Wolseley Hornet to the Triumph TR7 Tracer owes a debt to the original Mini. After all, ‘the superb road-holding and handling of the standard car is, if anything, enhanced’ stated Crayford.

Want to insure your Classic Car?