It was, of course, the Mustang, the car Ford intended as ‘the working man’s Thunderbird’. 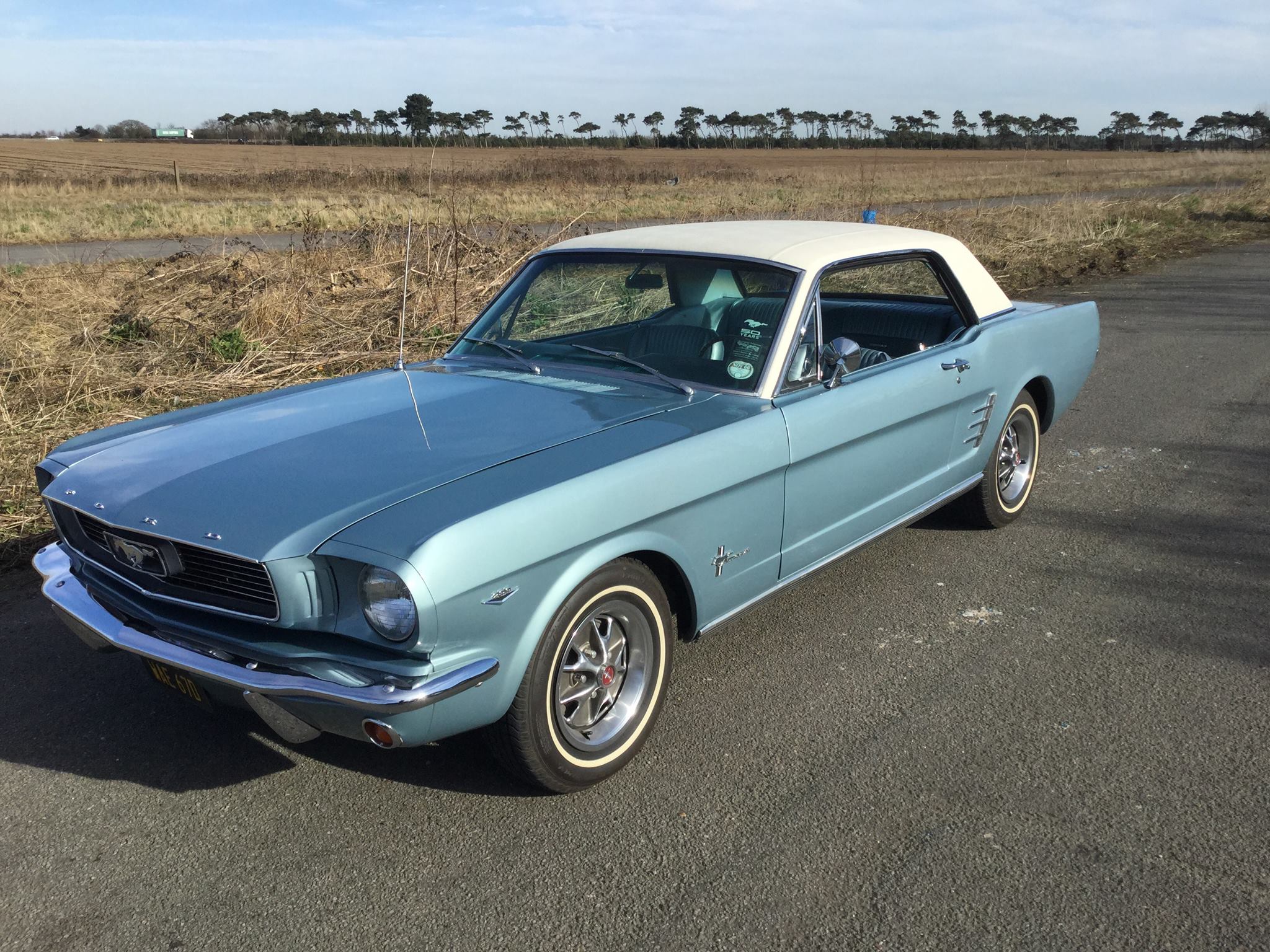 Such was the demand for the original “Pony Car” that one Texan customer was said to have slept in his local Ford dealership until his cheque cleared.

Fortunately, David Frost did not have to go to such lengths, but he had craved one ‘since I was 12. I collected die-cast, I’d seen them on television, and my father said one day he would own a Mustang rather than a Triumph Herald. He never did, but a few years ago, I was considering buying a new RHD version when a friend suggested I bought a classic “proper” Mustang. My 50th birthday was coming up, and I decided to treat myself’. 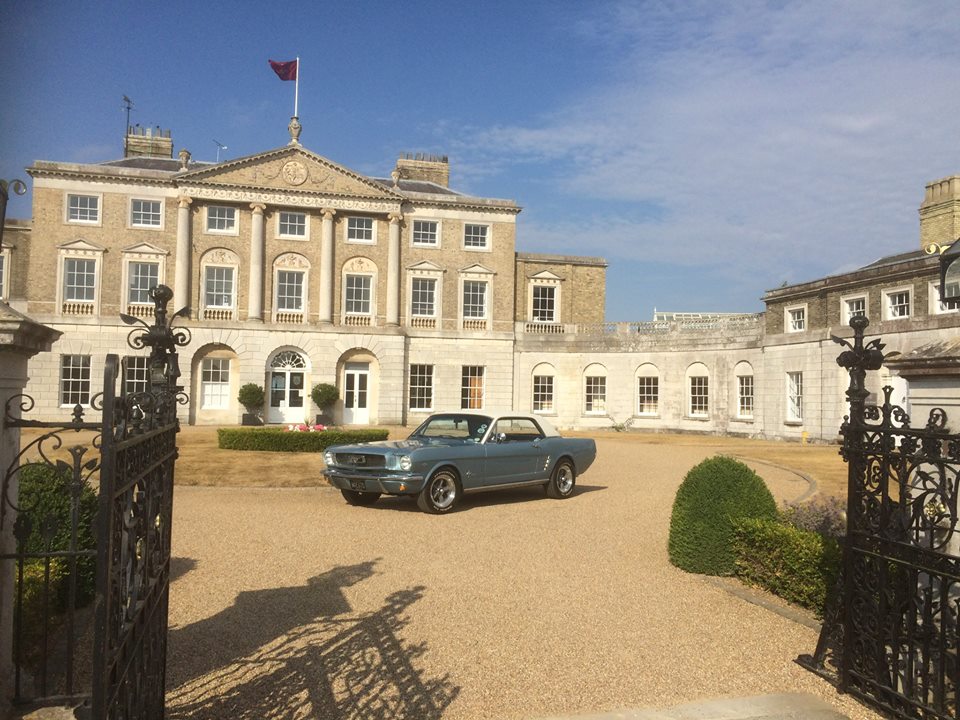 The Coupe dates from November 1965 and it was first registered in San Jose. ‘The engine is the 289 V8, and my car is fitted with the Cruise-O-Matic gearbox, which is a lovely combination’.

The popularity of the Chevrolet was a major inspiration for Lee Iacocca, the company’s vice-president and general manager of the Ford Division, to devise the Mustang.

The timing of the Mustang’s launch could not have been more perfect, for at that time young and affluent motorists were seeking a reasonably priced car with a youthful image.

The Mustang would also foster brand loyalty to Ford, as customers would graduate to a Thunderbird as they ascended the corporate ladder.

Very unusually for the period, the Mustang was also strongly marketed to women.

The original line-up consisted of a Coupe or Convertible with a choice of 170 straight six, 260 V8 or 289 V8 engines, the last-named in various degrees of tune.

The standard models featured a three-on-the-floor with four-speed manual and automatic transmission as extras while few self-respecting owners could resist the various “option packs”.

The basic Mustang’s low price of $2,368 was partially due to its limited array of standard equipment – the brochure listed ‘Glove Box Light’ as a special feature – but Ford offered various packages to enhance your social prestige.

David remarks that ‘my car has the “Pony Pack” interior’ which Ford introduced in early 1965.

This included a “wood grain” finish for the instrument panel and seat covers with an embossed “Galloping Pony” logo.

Fifty-four years ago, you could have also specified air conditioning and even a bench front seat while the Frost Mustang sports a very attraction white vinyl roof and “Torque-Thrust” wheels.

Within 12 months, Ford sold 418,812 Mustangs – and more than a million in its first eighteen months.

One key to its success was that although it shared mechanical components with existing models to reduce production costs, but it did not resemble the Falcon.

In May 1964, Car & Driver claimed the Mustang was ‘easily the best thing to come out of Dearborn since the 1932 V-8 Model B roadster’.

Three months later Road & Track evaluated three different models -the  260 manual, the 289 manual four-speed and the 289 automatic - in August of 1964, focusing on the second version ‘as it, in theory at least, should be of greatest interest to the enthusiast’.

The R&T article noted how the Ford represented extremely good value for money as ‘Even the completely loaded street version delivers at less than $3500 and this, compared with the near $5000 it takes to deliver a similarly equipped Sting Ray, makes it a bargain’.

The writer also noted ‘the advantages of having a full 4-seater cannot be overlooked either’, for Iacocca had envisaged the Mustang as serving as family transport.

A Ford may have lacked the social cachet of owning an MGB or a Triumph TR4, but it did offer more comfortable accommodation for those trips along the Interstate 1-95

As to domestic rivals in the “Personal Car Market”, AMC would not introduce the Rambler Marlin until early 1965.

Chrysler could justifiably claim that their Plymouth Barracuda pre-dated the Mustang as it made its bow on 1st April 1964.

The floor pan was sourced from the Valiant, but it still resembled its parent model and despite this hilariously awful commercial sales were a fraction of the Mustang.

Meanwhile, General Motors offered an array of interesting cars such as the Pontiac Tempest (especially in GTO form) and its Oldsmobile Cutlass and Buick Skylark stablemates, but these were larger “intermediate size” models.

Car & Driver believed it was ‘the most beautiful car to appear in this country since before World War II’.

However, the Ford still conveyed a more “youthful” image, and in the mid-1960s the Monza was probably a closer rival to the last of the Falcon Sprints.

By the time of its 1967 facelift, the Mustang had defined a new form of motoring in the USA but, as David points out, on this of the Atlantic, it was an exclusive car for the wealthy.

The nearest most Britons would have come to experiencing a Mustang in the mid-1960s was via a screening of Goldfinger.

Today., the standard reactions to Mr. Frost’s car tend to range from ‘“Cor, look at that!” to “a Mustang!” or, when I am sitting in traffic, “that’s a beautiful car!”.

Some younger people simply say “rev it!” and as a Coupe no-one tends to mention a certain Steve McQueen film’.

But perhaps the most important aspect of the David’s Mustang is that ‘It was everything I hoped for – and more’.

WITH THANKS TO: DAVID FROST EAST COAST RETROS - https://www.facebook.com/groups/EastCoastRetros/